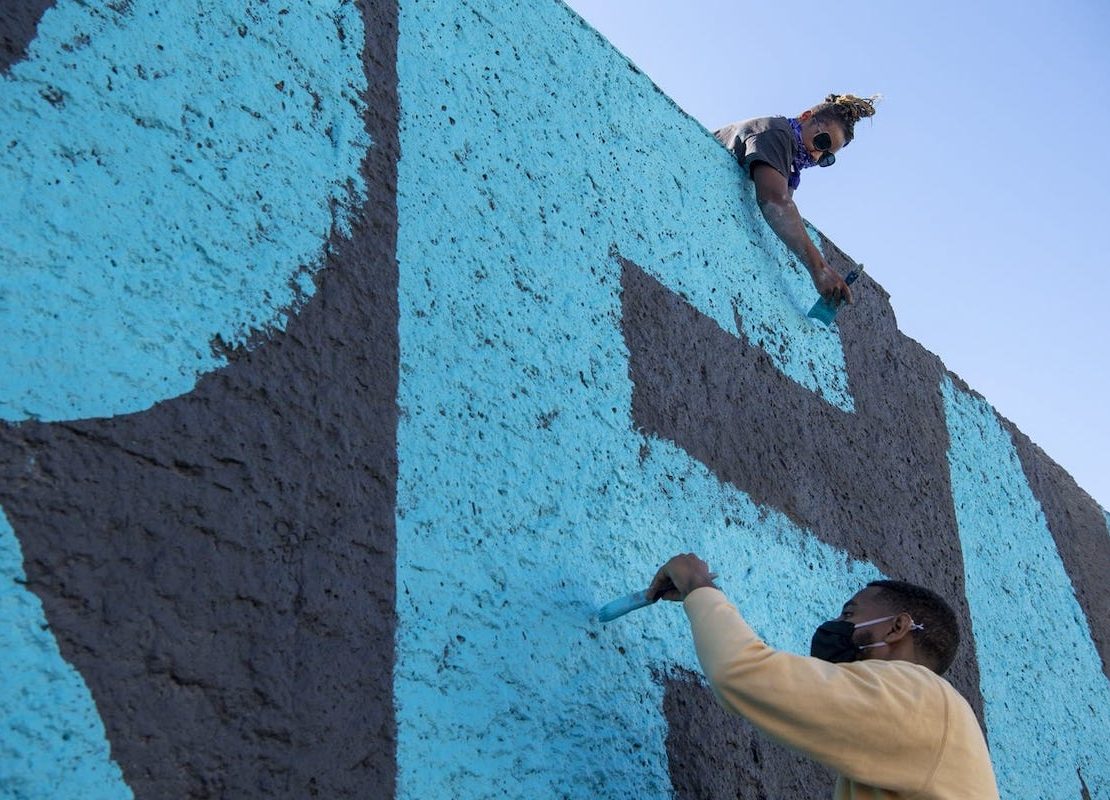 The first in a series of six murals has debuted as part of the “Deliver Black Dreams” campaign, which serves as a Columbus-wide call to action in support of racial justice and equality.

The artists were a few hours into painting a large-scale mural advocating for the dignity of Black people when the news hit.

The mural’s words — “Deliver Black Dreams” and “It’s For All Of Us” — had just begun to take shape Saturday on a retaining wall on Fifth Avenue in the Milo-Grogan neighborhood when former Vice President Joe Biden was projected to become the 46th president of the United States. Artist Lisa McLymont later recalled the jubilant atmosphere as passers-by began honking their horns in celebration and some artists were moved to tears.

Featured Image, Artists April Sunami, top, and Cameron Guthrie paint in the letters that make up a new mural along Fifth Avenue in the Milo-Grogan neighborhood on Nov. 8 as part of the “Delivering Black Dreams” campaign. Credit Gaelen Morse/Columbus Dispatch
FULL ARTICLE @ THE COLUMBUS DISPATH

he Maroon Arts Group (MAG) is a collective of creatives who have galvanized to develop and provide a platform for conscious art centered around the preservation and promotion of cultures of African descent. As a result of being turned away from local theatres that promote African American art, a group of artists led by Sheri Neale, galvanized to bring the Baltimore, MD play, A Real Nigga Show to Columbus, Ohio in February 2015 with a sold out audience and a more than 100 person waiting list. A Real Nigga Show is a theatrical collection, directed by Troy Burton from Baltimore, Maryland, of short stories that depict the various stereotypes and sentiments associated with the “n word” and its implications in today’s society. MAG has also developed creative conversations around this controversial concept, A N___*W o r d E x p e r i e n c e , to educate and perpetuate the multiple meanings of the “ n w o r d ” . M A G has also brought an original production of local artists that captures the internal conflict of reaching one’s fullest potential, B lack Staccato. In efforts to continue its mission, MAG continues to provide a platform for conscious art with its monthly “open mic” sessions, ROOTS: An Open Expression of Identity and with its new endeavor Movement Pursuing Arts, Commerce & Community (M PACC).