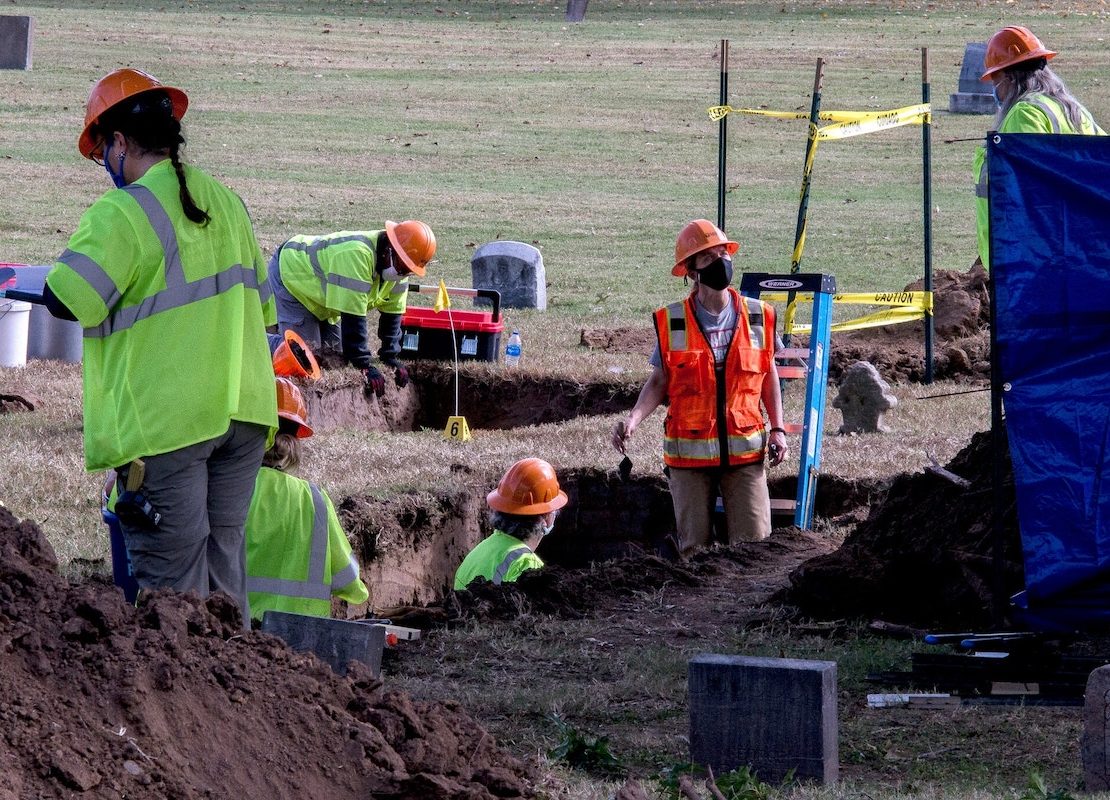 An excavation found 11 coffins in Oaklawn Cemetery, but painstaking work will be required to identify whether the remains are from Black victims of the 1921 race massacre.

OKLAHOMA CITY — A forensic team in Tulsa, Okla., said on Wednesday that it had unearthed 11 coffins while searching for victims from the 1921 massacre in which hundreds of Black residents were killed.

The mass grave was discovered in an area of the city’s Oaklawn Cemetery where records and research suggested that as many as 18 victims would be found. Painstaking work will be required to identify whether the remains are from victims of the massacre.

The remains will not be moved until they can be exhumed properly to avoid deterioration, said Kary Stackelbeck, a state archaeologist. She said the discovery “constitutes a mass grave.”

Greenwood is a historic freedom colony in Tulsa, Oklahoma. As one of the most prominent concentrations of African-American businesses in the United States during the early 20th century, it was popularly known as America’s “Black Wall Street“. It was burned to the ground in the Tulsa race massacre of 1921, in which white residents massacred as many as 300 black residents, injuring hundreds more, and leaving 5,000 people homeless. The riot was one of the most devastating massacres in the history of U.S. race relations, destroying the once-thriving Greenwood community.

Within ten years after the massacre, surviving residents who chose to remain in Tulsa rebuilt much of the district. They accomplished this despite the opposition of many white Tulsa political and business leaders and punitive rezoning laws enacted to prevent reconstruction. It continued as a vital black community until segregation was overturned by the federal government during the 1950s and 1960s. Desegregation encouraged black citizens to live and shop elsewhere in the city, causing Greenwood to lose much of its original vitality. Since then, city leaders have attempted to encourage other economic development activity nearby.

The Greenwood district in Tulsa came to be known as “Black Wall Street”, one of the most commercially successful and affluent majority African-American communities in the United States. Booker T. Washington referred to the Greenwood neighborhood as “Negro Wall Street.” Many Americans, including African-Americans, had moved to Oklahoma in hopes of gaining a shot at quick economic gains through the mining and oil industries. Even though African-Americans constituted a small percentage of the overall population in Oklahoma, the percentage of African-Americans in Tulsa had significantly increased to around 12.3 percent during the oil boom. Many African-Americans had come from the Deep South and Kansas because of the opportunity to strike gold because of the rich oil fields. During the Jim Crow era, African-Americans were not allowed to make purchases or services in predominantly white areas. In particular, Oklahoma was known to have some of the harshest and most unjust Jim Crow laws in the country.[citation needed] Some economists theorize this forced many African-Americans to spend their money where they would feel welcomed, effectively insulating cash flow to within the black community and allowing Greenwood to flourish and prosper.

On “Black Wall Street”, there were African-American attorneys, real estate agents, entrepreneurs, and doctors who offered their services in the neighborhood. One primary example of the black entrepreneurial spirit is illustrated by J.B. Stradford. He had graduated from Indiana University with a law degree and had moved to Greenwood to purchase various land vacancies in the area. After buying these vacant spaces, he would then sell them to African-American residents for redevelopment so that these empty spaces could be transformed into residential houses and profitable businesses. By 1921, Stradford had been considered one of the wealthiest African-Americans in the country as he owned numerous properties in Greenwood and even had his hotel named after him: Stratford Hotel. In addition to Mr. Stradford, there were also investments and reinvestments into the community. One executive of the local YMCA recalled that there were several barbershops, several grocery stores, and even a funeral home service. Greenwood was known to be an active religious community as there were numerous black-owned churches, Christian youth services, and other religious organizations.