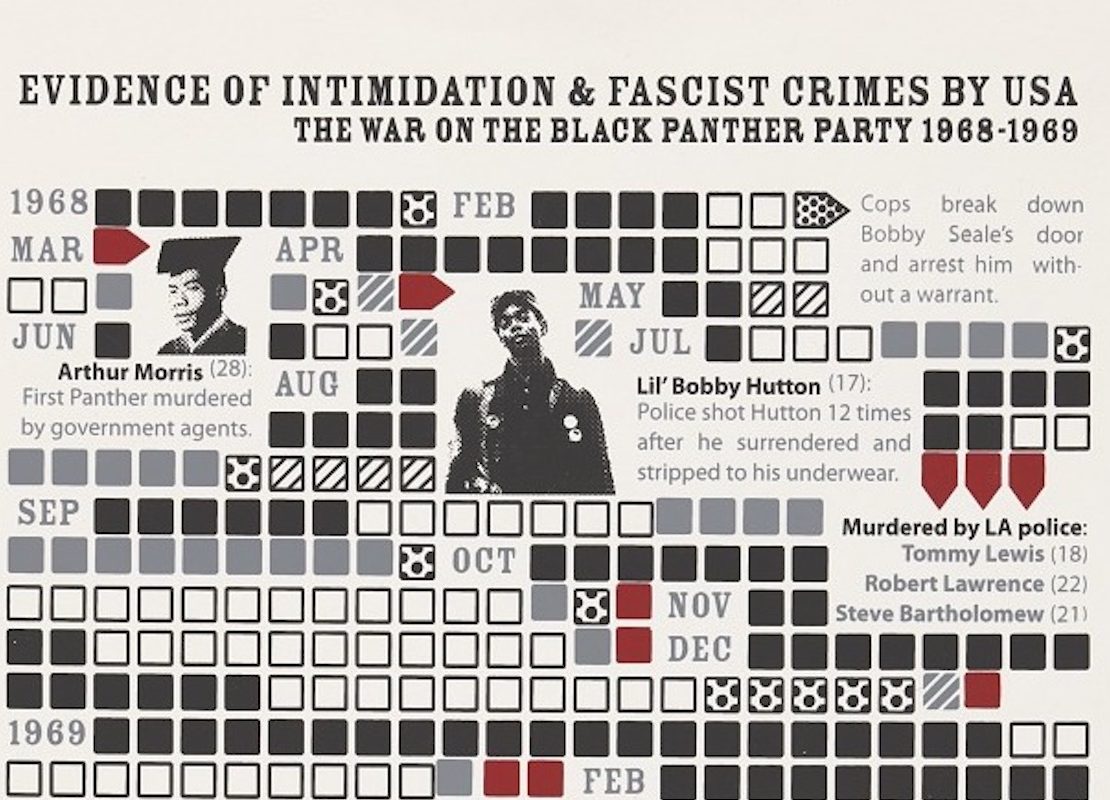 This is a timeline poster about violence and killings against Black Panther members by the police. This rectangular poster consists of rows of squares that mark the days of each month. Various squares are blacked out or filled with color or patterns. These colors and patterns correspond to a legend at the bottom of the poster. Scattered throughout the poster are small black and white vignettes of individuals who were persecuted by the police. Text at the top of the poster reads “Evidence of Intimated & Fascist Crimes by USA/ The war on the Black Panther Party 1968-1969.” On the poster’s bottom margin in the right corner is text that reads “Source: The Black Panther Black Community News Service.”

The National Museum of African American History and Culture (NMAAHC) is a Smithsonian Institution museum located on the National Mall in Washington, D.C., in the United States. It was established in December 2003 and opened its permanent home in September 2016 with a ceremony led by President Barack Obama.

Early efforts to establish a federally owned museum featuring African-American history and culture can be traced to 1915, although the modern push for such an organization did not begin until the 1970s. After years of little success, a much more serious legislative push began in 1988 that led to authorization of the museum in 2003. A site was selected in 2006, and a design submitted by Freelon Group/Adjaye Associates/Davis Brody Bond was chosen in 2009. Construction began in 2012 and the museum completed in 2016.

The NMAAHC proved immediately popular, ranking as the fourth most-visited Smithsonian museum in its first full year of operation. The museum has more than 40,000 objects in its collection, although only about 3,500 items are on display. The 350,000-square-foot (33,000 m2), 10 story building (five above and five below ground) and its exhibits have won critical praise.