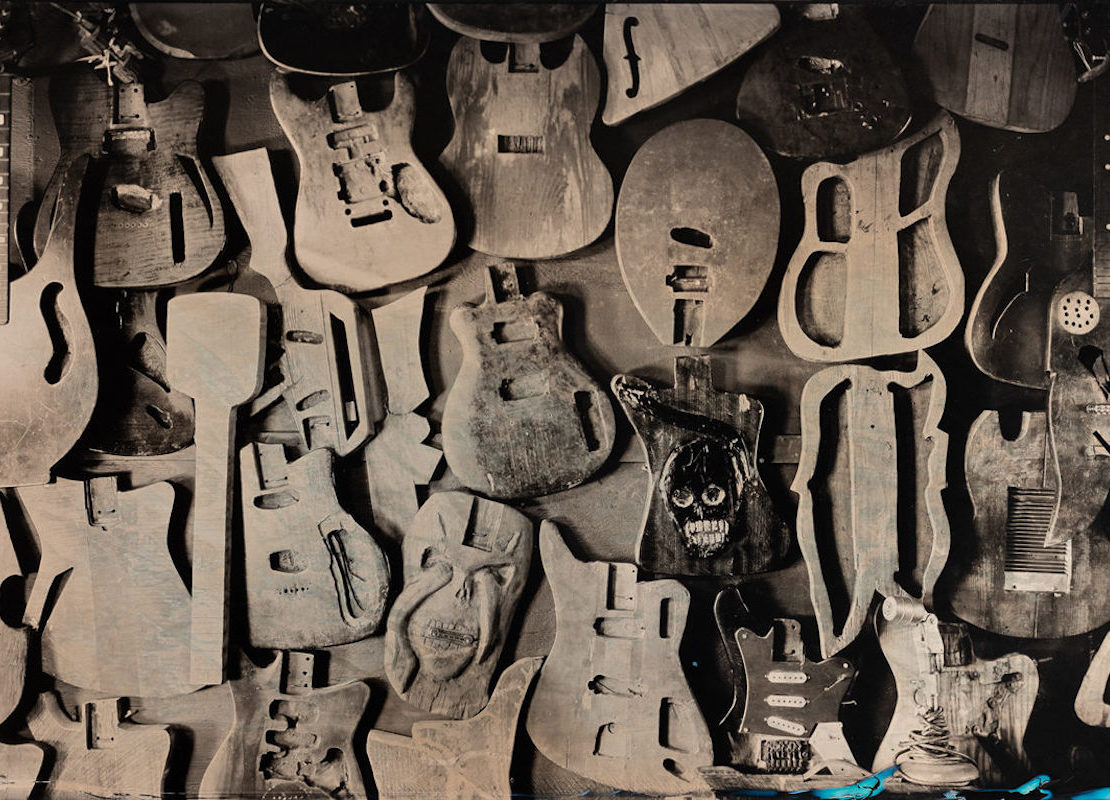 Artist Freeman Vines was captivated for a long time with an unforgettable sound he once heard from a gospel musician’s guitar. At his home near a tobacco field in the small rural town of Fountain, North Carolina, Vines then spent over 50 years hand-carving guitars out of found wood, in a relentless search for that special tone. Despite decades of creating guitars, he never found that sound again. But he found other revelations.

In the new book Hanging Tree Guitars, a collaboration between Vines, photographer Timothy Duffy, folklorist Zoe Van Buren, and published by The Bitter Southerner in association with Music Maker Relief Foundation, Vines spoke of the salvaged materials that inspired him to create these guitars, some of which appear more like sculptures than functional musical instruments. “Wood talks to me … Wood has a character, like the good cooks found out that food has a character,” Vines said in the book. More importantly, the wood that called to him had history, or a sense of spirit or purpose: the front step of a tobacco barn, a wooden trough, a piano soundboard. Of particular significance to him were two planks of black walnut wood, given to Vines by a man who had claimed that they were from a tree where a Black man had been lynched.

Lynching is premeditated murder committed by a group of people by extrajudicial action. Lynchings in the United States first became common in the Southern United States in the 1830s, 1840s, and 1850s, at which time most of the victims were white men. Lynchings of black people rose in number after the American Civil War during Reconstruction; they declined in the 1930s. Most lynchings were of African-American men in the Southern United States, but women and non-blacks were also lynched, not always in the South. White lynchings of black people also occurred in the Midwestern United States and the border states, especially during the 20th-century Great Migration of black people out of the Southern United States. The purpose was to enforce white supremacy and intimidate black people through racial terrorism. According to Ida B. Wells and Tuskegee University, most lynching victims were accused of murder or attempted murder. Rape or attempted rape was the second most common accusation; such accusations were often pretexts for lynching black people who violated Jim Crow etiquette or engaged in economic competition with whites. Sociologist Arthur F. Raper investigated one hundred lynchings during the 1930s and estimated that approximately one-third of the victims were falsely accused. On a per capita basis, lynchings were also common in California and the Old West, especially of Latinos, although they represented less than 10% of the national total. Native Americans, Asian Americans, Italian Americans, Greek Americans, Jewish Americans, and others were also lynched. Other ethnicities, including Finnish Americans and German Americans were also lynched occasionally.

According to the Tuskegee Institute, 4,743 people were lynched between 1882 and 1968 in the United States, including 3,446 African Americans and 1,297 whites. More than 73 percent of lynchings in the post–Civil War period occurred in the Southern states. According to the Equal Justice Initiative, 4,084 African Americans were lynched between 1877 and 1950 in the South.

The stereotype of a lynching is a hanging because hangings are what crowds of people saw and are also easy to photograph. Some hangings were professionally photographed and sold as postcards, which were popular souvenirs in some parts of the U.S. “Although most people think only of hanging, lynching means much more.” Victims were also killed in a variety of other ways: shot repeatedly, burned alive, forced to jump off a bridge, dragged behind cars, and the like. Sometimes they were tortured as well; body parts were sometimes removed and sold as souvenirs in stores. Occasionally lynchings were not fatal (see Lynching survivors in the United States). A “mock” lynching, putting the rope around the neck of someone suspected of concealing information, might be used to compel “confessions” (see Lynn Council).

Lynchings were most frequent from 1890 to the 1920s, with a peak in 1892. Lynchings were often large mob actions, attended by hundreds or thousands of watchers. As in the case of Ell Parsons, they were sometimes announced in advance in newspapers and in one instance (Fred Rochelle) with a special train. However, in the later 20th century lynchings became more secretive, and were conducted by smaller groups of people.

According to Michael J. Pfeifer, the prevalence of lynching in postbellum America reflects a lack of confidence in the “due process” judicial system. He links the decline in lynching in the early twentieth century with “the advent of the modern death penalty”: “legislators renovated the death penalty…out of direct concern for the alternative of mob violence”. He also cites “the modern, racialized excesses of urban police forces in the twentieth century and after” as having characteristics of lynching.

On April 26, 2018, in Montgomery, Alabama, The National Memorial for Peace and Justice opened. Founded by the Equal Justice Initiative of that city, it is the first large memorial to document lynchings of African Americans in the United States.