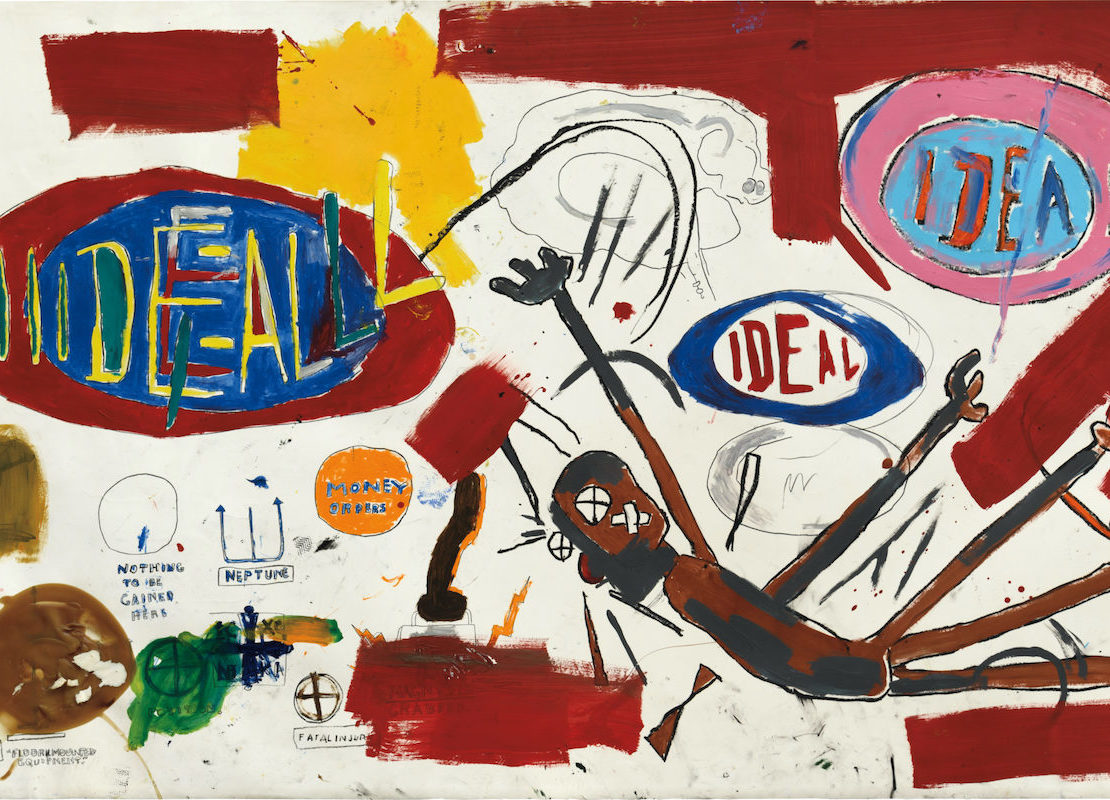 Jean-Michel Basquiat is poised to continue his reign at auction this summer. Alongside Joan Mitchell’s painting Noel, valued between $9.5 million to $12.5 million, Phillips will put up a key work by the artist in its New York contemporary evening sale on July 2. Standing some 6 feet by 11 feet, the monumental Victor 25448 (1987) features a host of the artist’s signature scrawls and fractured figures. The work is expected to go for between $8 million and $12 million. A percentage of the proceeds from the sale of the work will go to the Art for Justice Fund, an initiative funded in part by collector Agnes Gund that focuses on mass incarceration and art-making.

The large-scale paper on canvas work first came to the market through New York’s Tony Shafrazi Gallery, where collector Peter Brant first acquired it. The painting last came to auction when the Brants sold it in a Christie’s New York contemporary evening sale in May 2008 for $3.5 million, where it failed to meet its presale estimate of $4.5 million–$6.5 million.

Jean-Michel Basquiat (December 22, 1960 – August 12, 1988) was an American artist of Haitian and Puerto Rican descent. Basquiat first achieved fame as part of SAMO, an informal graffiti duo who wrote enigmatic epigrams in the cultural hotbed of the Lower East Side of Manhattan during the late 1970s, where rap, punk, and street art coalesced into early hip-hop music culture. By the 1980s, his neo-expressionist paintings were being exhibited in galleries and museums internationally. The Whitney Museum of American Art held a retrospective of his art in 1992.

Basquiat’s art focused on dichotomies such as wealth versus poverty, integration versus segregation, and inner versus outer experience. He appropriated poetry, drawing, and painting, and married text and image, abstraction, figuration, and historical information mixed with contemporary critique.

Basquiat used social commentary in his paintings as a tool for introspection and for identifying with his experiences in the black community of his time, as well as attacks on power structures and systems of racism. Basquiat’s visual poetics were acutely political and direct in their criticism of colonialism and support for class struggle. He died of a heroin overdose at his art studio at the age of 27. On May 18, 2017, at a Sotheby’s auction, a 1982 painting by Basquiat depicting a black skull with red and black rivulets (Untitled) set a new record high for any American artist at auction, selling for $110.5 million.

His father, Gérard Basquiat, was born in Port-au-Prince, Haiti, and his mother, Matilde Basquiat, who was of Puerto Rican descent, was born in Brooklyn, New York. Matilde instilled a love for art in her young son by taking him to art museums in Manhattan and enrolling him as a junior member of the Brooklyn Museum of Art. Basquiat was a precocious child who learned how to read and write by the age of four and was a gifted artist. His teachers, including artist José Machado, noticed his artistic abilities, and his mother encouraged her son’s artistic talent. By the age of 11, Basquiat was fully fluent in French, Spanish and English. In 1967, Basquiat started attending Saint Ann’s School, an arts-oriented exclusive private school. There he met his friend Marc Prozzo; together they created a children’s book, written by Basquiat and illustrated by Prozzo. Basquiat became an avid reader of Spanish, French, and English texts and a good athlete, competing in track events.

In September 1968, at the age of seven, Basquiat was hit by a car while playing in the street. His arm was broken and he suffered several internal injuries; he eventually underwent a splenectomy. While he was recuperating from his injuries, his mother brought him a copy of Gray’s Anatomy to keep him occupied. This book would prove to be influential in his future artistic outlook. His parents separated that year and he and his sisters were raised by their father. The family resided in Boerum Hill, Brooklyn, for five years, then moved to San Juan, Puerto Rico, in 1974, where Basquiat studied at Saint John’s School in Condado. After two years, they returned to New York City.

When he was 13, his mother was committed to a mental institution and thereafter spent her life in and out of institutions. Due to his mother’s instability and family unrest, at 15 Basquiat ran away from home. He slept on park benches in Tompkins Square Park, and was arrested and returned to the care of his father within a week. Basquiat dropped out of Edward R. Murrow High School in the 10th grade at the age of 17 and then attended City-As-School, an alternative high school in Manhattan, home to many artistic students who failed at conventional schooling. His father banished him from the household for dropping out of high school and Basquiat stayed with friends in Brooklyn. He supported himself by selling T-shirts and homemade post cards.