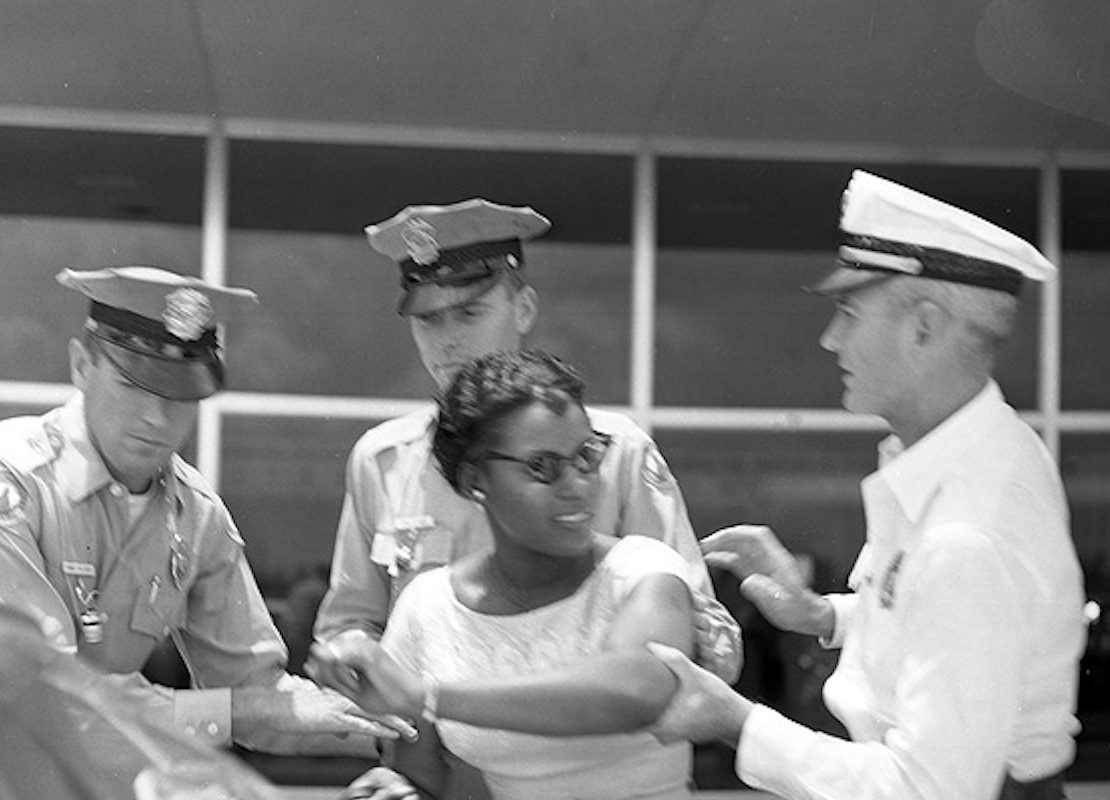 On June 13, 1961, an interracial group of eighteen rabbis and ministers participated in a freedom ride to Tallahassee, Florida, sponsored by the Congress of Racial Equality. The riders experienced a few minor confrontations along the way, but were spared major incidents of violence in Florida due to the governor’s negotiations with local officials to ensure that the riders were left alone.

On June 15, 1961, shortly before they were scheduled to board an airplane and return to Washington, D.C., the interfaith riders and local activists attempted to integrate the Tallahassee Airport’s segregated restaurant. The restaurant closed to avoid serving the riders and eight riders departed as planned for Washington. Ten riders and three local activists remained at the airport and demanded service throughout the night and into the following day. On June 16, 1961, the group was arrested and charged with unlawful assembly.

The Congress of Racial Equality (CORE) is an African-American civil rights organization in the United States that played a pivotal role for African Americans in the Civil Rights Movement. Founded in 1942, its stated mission is “to bring about equality for all people regardless of race, creed, sex, age, disability, sexual orientation, religion or ethnic background.”

CORE was founded in Chicago, Illinois, in March 1942. Among the founding members were James L. Farmer, Jr., George Houser, James R. Robinson, Samuel E. Riley, Bernice Fisher, Homer Jack, and Joe Guinn. Of the 50 original members, 28 were men and 22 were women, roughly one-third of them were black and two-thirds white. Bayard Rustin, while not a father of the organization, was, as Farmer and Houser later said, “an uncle to CORE” and supported it greatly. The group had evolved out of the pacifist Fellowship of Reconciliation, and sought to apply the principles of nonviolence as a tactic against segregation. The group’s inspiration was Mahatma Gandhi‘s teachings of non-violent resistance. Krishnalal Shridharani, a popular writer and journalist as well as a vibrant and theatrical speaker, had been a protege of Gandhi and had been jailed in the Salt March whose book War Without Violence influenced the organisation. Gandhi had, in turn, been influenced by the writings of Henry David Thoreau, the American author, poet, and philosopher. At the time of CORE’s founding Gandhi was still engaged in non-violent resistance against British rule in India; CORE believed that nonviolent civil disobedience could also be used by African-Americans to challenge racial segregation in the United States.

Freeddom Rides – On April 10, 1947, CORE sent a group of eight white (including James Peck, their publicity officer) and eight black men on what was to be a two-week Journey of Reconciliation through Virginia, North Carolina, Tennessee, and Kentucky in an effort to end segregation in interstate travel. The members of this group were arrested and jailed several times, but they received a great deal of publicity, and this marked the beginning of a long series of similar campaigns.

By the early 1960s, Farmer, who had taken a hiatus from leading the group, returned as its executive secretary and sought to repeat the 1947 journey, coining a new name for it: the Freedom Ride.

On May 4, 1961, participants journeyed to the deep South, this time including women as well as men and testing segregated bus terminals as well. The riders were met with severe violence. In Anniston, Alabama, one of the buses was fire-bombed and passengers were beaten by a white mob. White mobs also attacked Freedom Riders in Birmingham and Montgomery. The violence garnered national attention, sparking a summer of similar rides by CORE, SNCC and other Civil Rights organizations and thousands of ordinary citizens. Source, Congress of Racial Equality. (2020). Retrieved June 23, 2020, from, Congress of Racial Equality