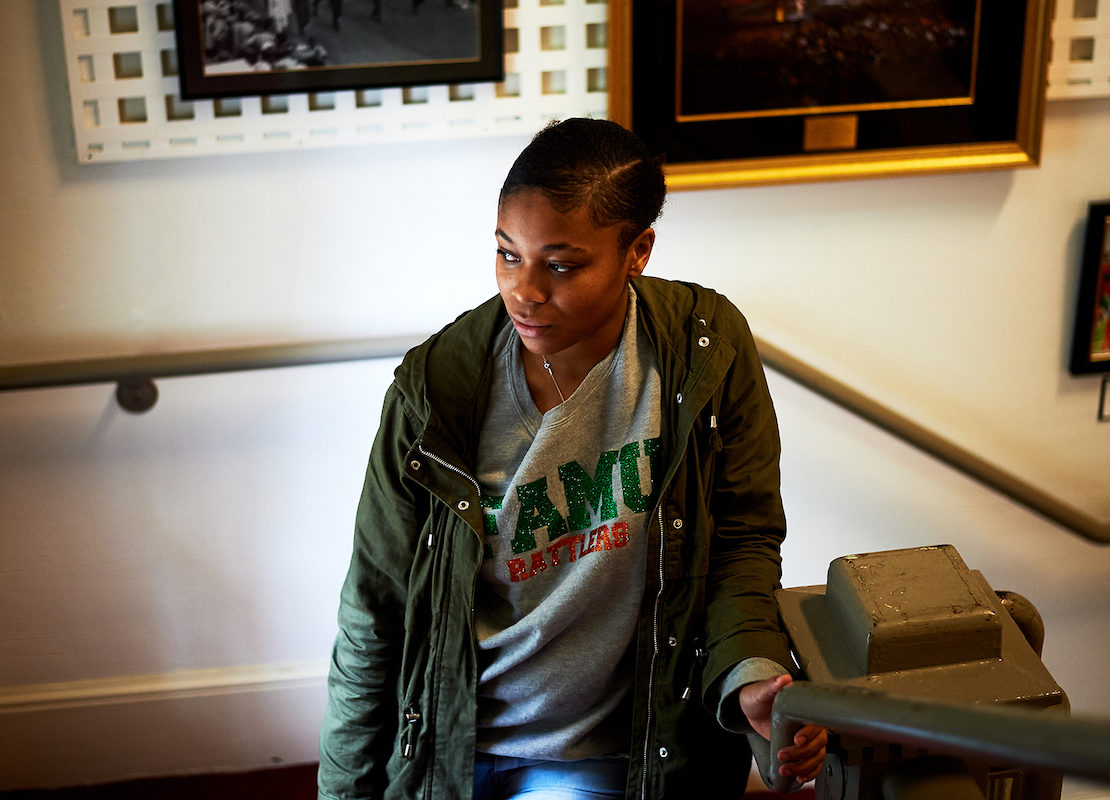 How a scholarship helped — and didn’t help — descendants of victims of the 1923 Rosewood racial massacre.

TALLAHASSEE — Ever since Morgan Carter was a little girl, her grandmother would tell her a story. It was about an old mill town, deep in the backwoods of north Florida — a place where black people did well for themselves. The town was called Rosewood. That’s where Carter’s great-grandfather Oren Monroe was born.

In 1923, when Monroe was 8 years old, an all-white mob burned the town to the ground. They killed six people, maybe more. He escaped with a group of women and children on an unusually cold night, wading through a swamp before boarding a train that took them to a safer place.

Carter was destined to be the story’s happy ending. Because of the pain Monroe’s community suffered, the Florida legislature passed a law in 1994 allowing descendants of Rosewood to go to college in the state tuition-free. The law is regarded as the first instance of a legislative body in the United States giving reparations to African Americans.

Rosewood is an unincorporated community in Levy County, Florida, located just off State Road 24 approximately 1 mile (1.6 km) northeast of Sumner and 9 miles (14 km) northeast of Cedar Key. An African-American community prospered there in the early 20th century, until a white mob destroyed it in the 1923 Rosewood Massacre.

SETTLEMENT – The initial settlers of Rosewood were both black and white. When most of the cedar trees in the area had been cut by 1890, the pencil mills closed, and many white residents moved to Sumner. By 1900, the population in Rosewood had become predominantly black. The village of Sumner was predominantly white, and relations between the two communities were relatively amicable. The population of Rosewood peaked in 1915 at 355 people.

Two black families in Rosewood named Goins and Carrier were the most influential. The Goins family brought the turpentine industry to the area, and in the years preceding the attacks, were the second largest landowners in Levy County. To avoid lawsuits from white competitors, the Goins brothers moved to Gainesville, and the population of Rosewood decreased slightly. The Carriers were also a large family, responsible for logging in the region. By the 1920s, almost everyone in the close-knit community was distantly related to each other. Although residents of Rosewood probably did not vote because voter registration requirements in Florida had effectively disfranchised blacks since the turn of the century, both Sumner and Rosewood were part of a single voting precinct counted by the U.S. Census. In 1920, the combined population of both towns was 344 blacks and 294 whites.

BEFORE THE MASSACRE – As was common in the late 19th century South, Florida had imposed legal racial segregation under Jim Crow laws, requiring separate black and white public facilities and transportation. Blacks and whites created their own community centers: in 1920, the residents of Rosewood were mostly self-sufficient. They had three churches, a school, a large Masonic Hall, a turpentine mill, a sugarcane mill, a baseball team named the Rosewood Stars, and two general stores, one of which was white-owned. The village had about a dozen two-story wooden plank homes, other small two-room houses, and several small unoccupied plank farm and storage structures. Some families owned pianos, organs, and other symbols of middle-class prosperity. Survivors of the Rosewood Massacre remember it as a happy place. In 1995 survivor Robie Mortin recalled at age 79, “Rosewood was a town where everyone’s house was painted. There were roses everywhere you walked. Lovely.”

BEFORE 1923 – Rosewood was settled in 1845, 9 miles (14 km) east of Cedar Key, near the Gulf of Mexico. The local industry was centered on timber. Two pencil mills were nearby in Cedar Key; several turpentine mills and a sawmill 3 miles (5 km) away in Sumner helped support local residents, as did farming of citrus and cotton. The hamlet grew enough to warrant the construction of a post office and train depot on the Florida Railroad in 1870, but it was never incorporated as a town.

DECLINE OF ROSEWOOD’S ECONOMY (1923-1950) – In 1923, during the infamous Rosewood Massacre, the entire town of Rosewood was razed except for John Wright’s General Store. After the majority of the population fled Rosewood, the once profitable turpentine industry began to fade as newer, alternative synthetic products were being produced. By 1950, the turpentine industry practically no longer existed.

SINCE 1950 – Since the 1950s, several businesses were established in Rosewood, including a general store; fisheries; charter tours; clam, oysters and other types of Mollusca farmers; agricultural farms; restaurants; storage facilities and a small airfield. Several neighborhoods have been developed around these businesses.

ROSEWOOD MASSACRE – In January 1923, white men from nearby towns lynched a Rosewood resident allegedly in response to a lie that a white woman in nearby Sumner had been beaten and possibly raped by a black drifter. The woman was actually beaten up by her lover while her husband was at work. When black citizens defended themselves against further attack, several hundred whites organized to comb the countryside hunting for black people and burned almost every structure in Rosewood. Survivors hid for several days in nearby swamps and were evacuated by train and car to larger towns. Although state and local authorities were aware of the violence, they made no arrests for the activities in Rosewood. The town was abandoned by black residents during the attacks. None ever returned.

MASSACRE REPARATIONS – In the spring of 1994, the Florida state legislature voted to give $2 million in compensation for the nine surviving family members (equaling $150,000 each). In December 2010, a state scholarship was established for descendants of families that survived the massacre. Governor Jeb Bush in 2004 placed a plaque commemorating the massacre in front of John Wright’s general store, the only remaining structure from the Rosewood Massacre. This plaque was vandalized on at least one occasion when it was shot at from a passing car.