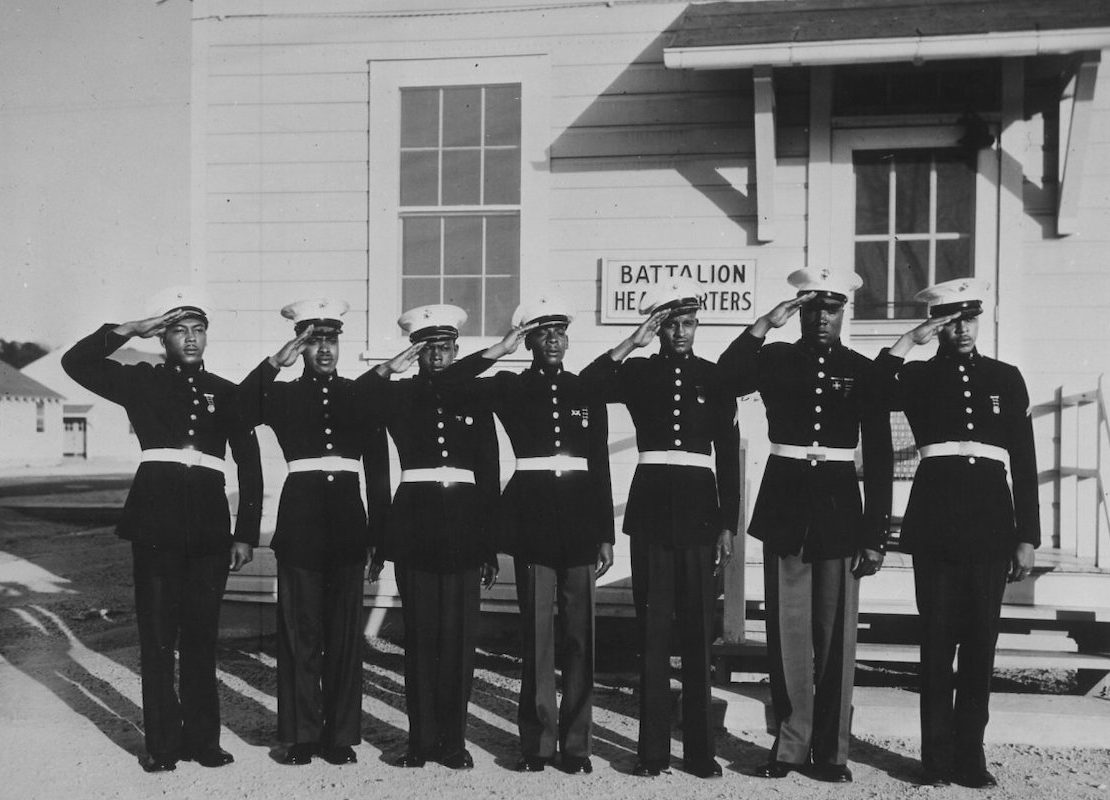 Faced with racial discrimination at home and in the Corps, African American Marines proved themselves at Iwo Jima and elsewhere during World War II.

Prior to the summer of 1941, the United States Marine Corps did not want them. The Navy barely tolerated them in restricted capacities as cooks, waiters, servants for officers, and dockside stevedores. The Army, too, thought they were only good enough to tackle menial duties and perform manual labor.

On June 25, 1941, after black labor activist A. Philip Randolph threatened to embarrass President Franklin D. Roosevelt with a massive march on Washington to protest the military’s policy of racial segregation, America’s commander-in-chief (with his wife’s urging), signed Executive Order #8802 mandating that all services accept qualified African American enlistees-draftees. For the first time in 167 years, the U.S. Marine Corps would be receiving black Americans.

In 1936, 57-year-old, four-star general Thomas Holcomb became the Corps’ 17th commandant, beginning his seven-year reign over all things Marine Corps. Like most white officers, Holcomb rigidly insisted that blacks had no place in his Corps as they tried to “break into a club that doesn’t want them.” As the Corps frowned upon the U.S. Army as an inferior, poorly trained, lesser-motivated service (but one that was accepting black draftees and enlistees in segregated units), Holcomb declared, “The Negro race has every opportunity now to satisfy its aspirations for combat in the Army.”

With the Corps responding as an offshoot to Navy authority, Secretary of the Navy Frank Knox agreed. Attempting to integrate African Americans became an overwhelming challenge for the Marine Corps’ Division of Plans and Policies as part of its Personnel Services branch. In charge of those affairs was a University of Southern California graduate, Colonel Ray Albert Robinson, a resident of Los Angeles, California.

Considering his background, Robinson had little acquaintance with Jim Crow laws that had dominated America’s southern states since Reconstruction. He had to follow the traditions of his era when Jim Crow spoke aloud with timeworn prejudices. Robinson said, “It [integration] just scared us to death; we’ve never had any [black recruits]. We didn’t know how to handle them. We were afraid of them.”