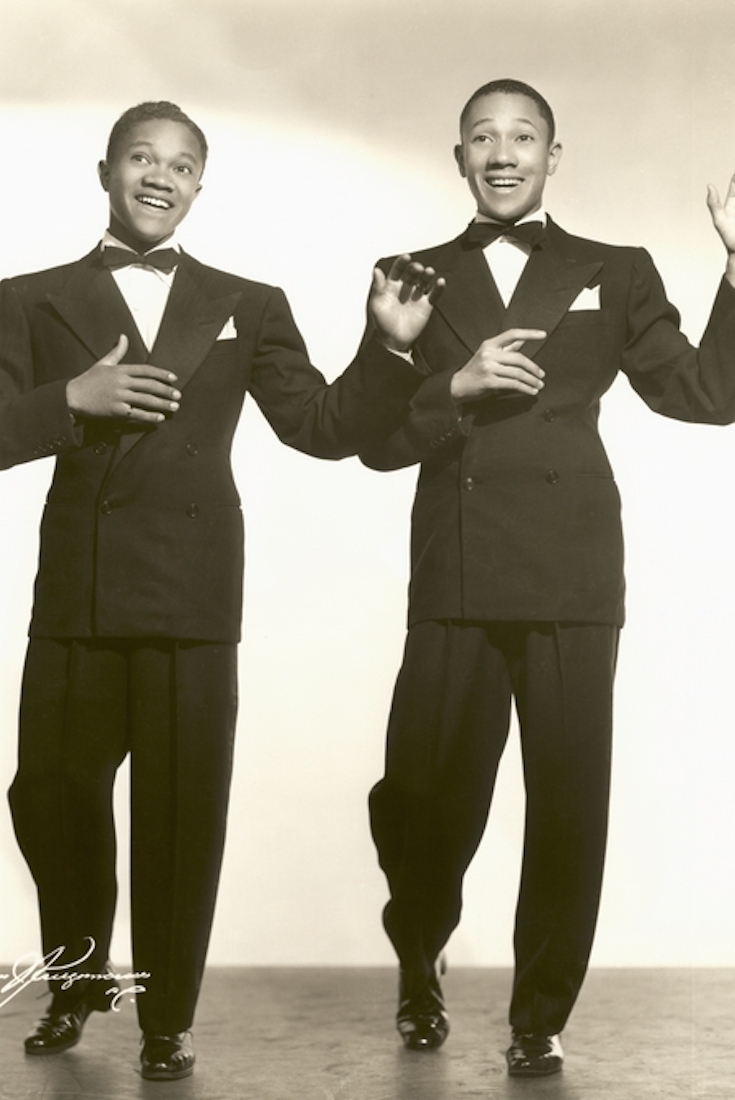 Most jazz tap-dancers stand up and dance. The Nicholas Brothers did that — and then they flew, catapulting themselves over each other’s heads, step by step down a staircase, or running up a wall and uncoiling backward into thin air. Perhaps you’ve seen them on television retrospectives of Hollywood, in film clips of movies like ”Down Argentine Way” (1940) or ”The Pirate” (1948). More often than not, they would touch down from such feats in a split — and not just any old kind either: a true balletic split, with the back as well as the front knees straightened. And then, unbelievably, they would rise without using their hands and do it all again, timing their feats in perfect synchrony to each other, yet in teasing counterpoint to the ingratiatingly danceable music by Duke Ellington, Glenn Miller, Jimmy Lunceford, Cab Calloway or even the somewhat intractable be-bop of Dizzy Gillespie. The splits were tough, but, for them, keeping their pristine evening wear (tails, usually) pristine was even tougher.

For it wasn’t the acrobatics, in themselves, that made the Nicholas brothers the Nicholas Brothers. It was the overall beauty and musicality of the entire dance. Their achievement was in the how — the way Fayard would deploy his hands, as graceful as Fred Astaire’s; the way Harold would make every silhouette superclear; the genial, noncompetitive way each brother would cede the floor to the other for a solo, passing the dance like a baton, in musical time. When Astaire pronounced their ”Jumpin’ Jive” number in the movie ”Stormy Weather” (1943) — unrehearsed and achieved on the first take — to be the greatest dancing he had ever seen on film, he was not commending the acrobatics alone but rather the way the brothers erupted organically out of their tap steps, like a series of overlapping geysers that, simply to look at, project an observer into a stratosphere of elation.