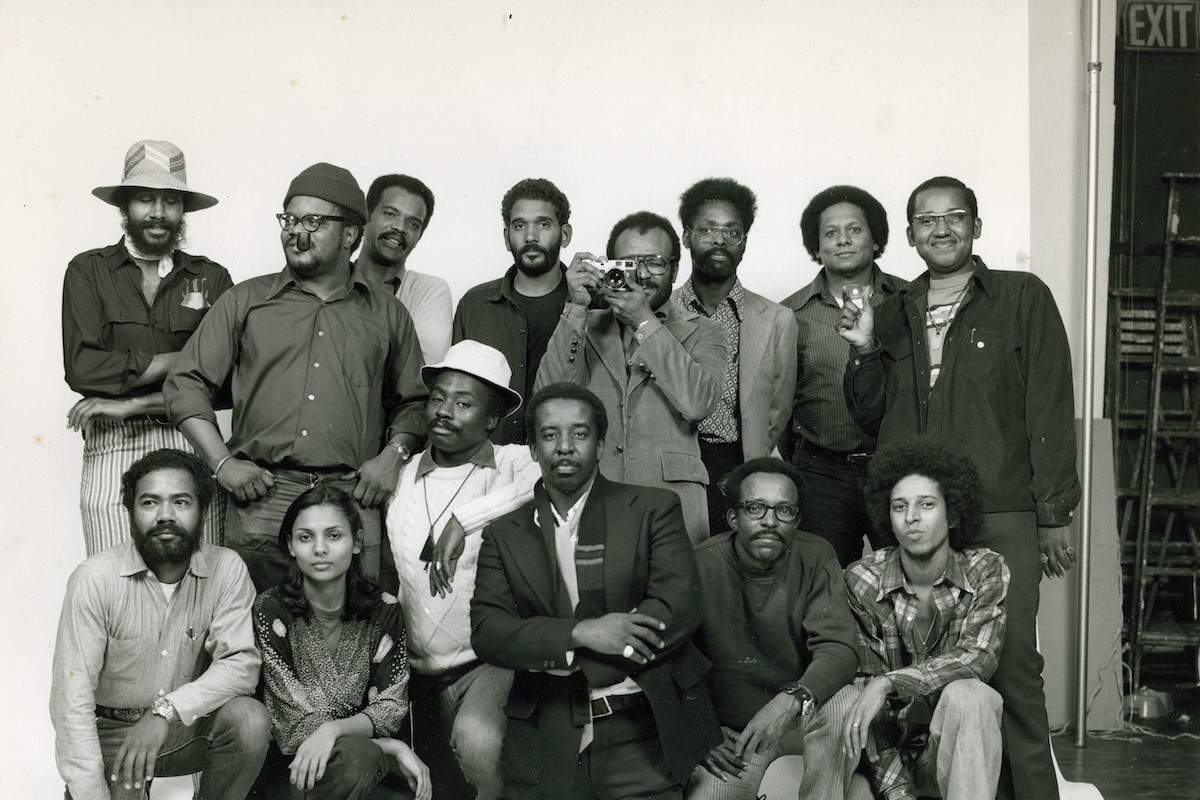 There’s a picture of Miles Davis, black-and-white, date unknown, with the long, lean figure of bassist Ron Carter at his side. Miles aficionados can deduce that it’s from the era of his second quintet, sometime between 1964 and 1968. Davis is seated, his body slightly bowed, trumpet pressed close to his figure as he blows. Behind him to his right, Carter stands, relaxed but almost stoic, fingers arched over the strings.

The image is dark. Very dark. But just the right amount of light illuminates the men’s faces and their instruments. The photo was taken by New York photographer Louis Draper, and there is something about the way he’s captured the moment, from the shaft of light gently illuminating Davis to Carter’s quiet power — something that says Draper saw the men, really saw them, and wanted to us to see them, too.

It’s easy to make great artists appear great, wrapped up as they are in our admiration. But what about everyone else? The photographers of Harlem’s Kamoinge collective, which Draper co-founded, wanted to spotlight the beauty of black life, from the jazz giants to ordinary neighborhood residents. The members of the Kamoinge collective recognized that they would have to band together, not just in order to push one another artistically, but to earn their place in the larger photography world, which wasn’t very interested in letting them in. The collective helped launch the careers of several prominent black photographers and challenged the way stories of black lives were being told, and who got to tell them.

The group was formed in 1963, in Harlem, when two black photography groups — Draper’s Group 35, which included Herman Howard and Calvin Mercer, among others, and another local group, which included Herbert Randall and Shawn Walker — combined to create a larger collective. In all, this first iteration had 15 members.

Harlem
Harlem is a neighborhood in the northern section of the New York City borough of Manhattan. It is bounded roughly by Frederick Douglass Boulevard, St. Nicholas Avenue, and Morningside Park on the west; the Harlem River and 155th Street on the north; Fifth Avenue on the east; and Central Park North on the south. The greater Harlem area encompasses several other neighborhoods and extends west to the Hudson River, north to 155th Street, east to the East River, and south to 96th Street.

Originally a Dutch village, formally organized in 1658, it is named after the city of Haarlem in the Netherlands. Harlem’s history has been defined by a series of economic boom-and-bust cycles, with significant population shifts accompanying each cycle. Harlem was predominantly occupied by Jewish and Italian Americans in the 19th century, but African-American residents began to arrive in large numbers during the Great Migration in the 20th century. In the 1920s and 1930s, Central and West Harlem were the focus of the “Harlem Renaissance”, an outpouring of artistic work without precedent in the American-black community. However, with job losses during the Great Depression of 1929–1933 and the deindustrialization of New York City after World War II, rates of crime and poverty increased significantly, and from the second half of the 20th century to the early 2000s, most of greater Harlem’s residents were black. Since New York City’s revival in the late 20th century, Harlem has been experiencing the effects of gentrification and new wealth.

Harlem is part of Manhattan Community District 10 and its primary ZIP Codes are 10026, 10027, 10030, 10037, and 10039. It is patrolled by the 28th and 32nd Precincts of the New York City Police Department. The greater Harlem area also includes Manhattan Community Districts 9 and 11, several additional ZIP codes, and several police precincts. Fire services are provided by four New York City Fire Department companies. Politically, Harlem is represented by the New York City Council’s 7th, 8th, and 9th districts. The area is served by the New York City Subway and local bus routes. It contains several public elementary, middle, and high schools, and is close to several colleges including Columbia University and the City College of New York.
Wikipedia