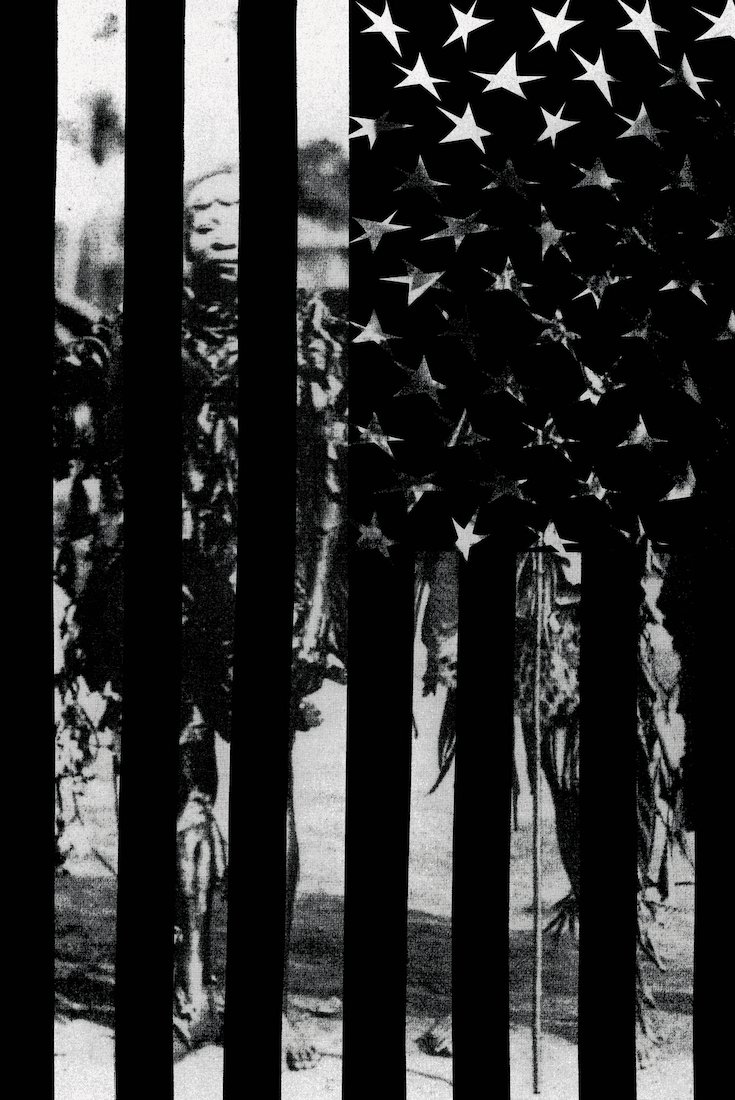 Nikole Hannah-Jones, The New York Times Magazine
ARTWORK BY ADAM PENDLETON. Featured Image
My dad always flew an American flag in our front yard. The blue paint on our two-story house was perennially chipping; the fence, or the rail by the stairs, or the front door, existed in a perpetual state of disrepair, but that flag always flew pristine. Our corner lot, which had been redlined by the federal government, was along the river that divided the black side from the white side of our Iowa town. At the edge of our lawn, high on an aluminum pole, soared the flag, which my dad would replace as soon as it showed the slightest tatter.

My dad was born into a family of sharecroppers on a white plantation in Greenwood, Miss., where black people bent over cotton from can’t-see-in-the-morning to can’t-see-at-night, just as their enslaved ancestors had done not long before. The Mississippi of my dad’s youth was an apartheid state that subjugated its near-majority black population through breathtaking acts of violence. White residents in Mississippi lynched more black people than those in any other state in the country, and the white people in my dad’s home county lynched more black residents than those in any other county in Mississippi, often for such “crimes” as entering a room occupied by white women, bumping into a white girl or trying to start a sharecroppers union. My dad’s mother, like all the black people in Greenwood, could not vote, use the public library or find work other than toiling in the cotton fields or toiling in white people’s houses. So in the 1940s, she packed up her few belongings and her three small children and joined the flood of black Southerners fleeing North. She got off the Illinois Central Railroad in Waterloo, Iowa, only to have her hopes of the mythical Promised Land shattered when she learned that Jim Crow did not end at the Mason-Dixon line.

Grandmama, as we called her, found a house in a segregated black neighborhood on the city’s east side and then found the work that was considered black women’s work no matter where black women lived — cleaning white people’s houses. Dad, too, struggled to find promise in this land. In 1962, at age 17, he signed up for the Army. Like many young men, he joined in hopes of escaping poverty. But he went into the military for another reason as well, a reason common to black men: Dad hoped that if he served his country, his country might finally treat him as an American.

So when I was young, that flag outside our home never made sense to me. How could this black man, having seen firsthand the way his country abused black Americans, how it refused to treat us as full citizens, proudly fly its banner? I didn’t understand his patriotism. It deeply embarrassed me.