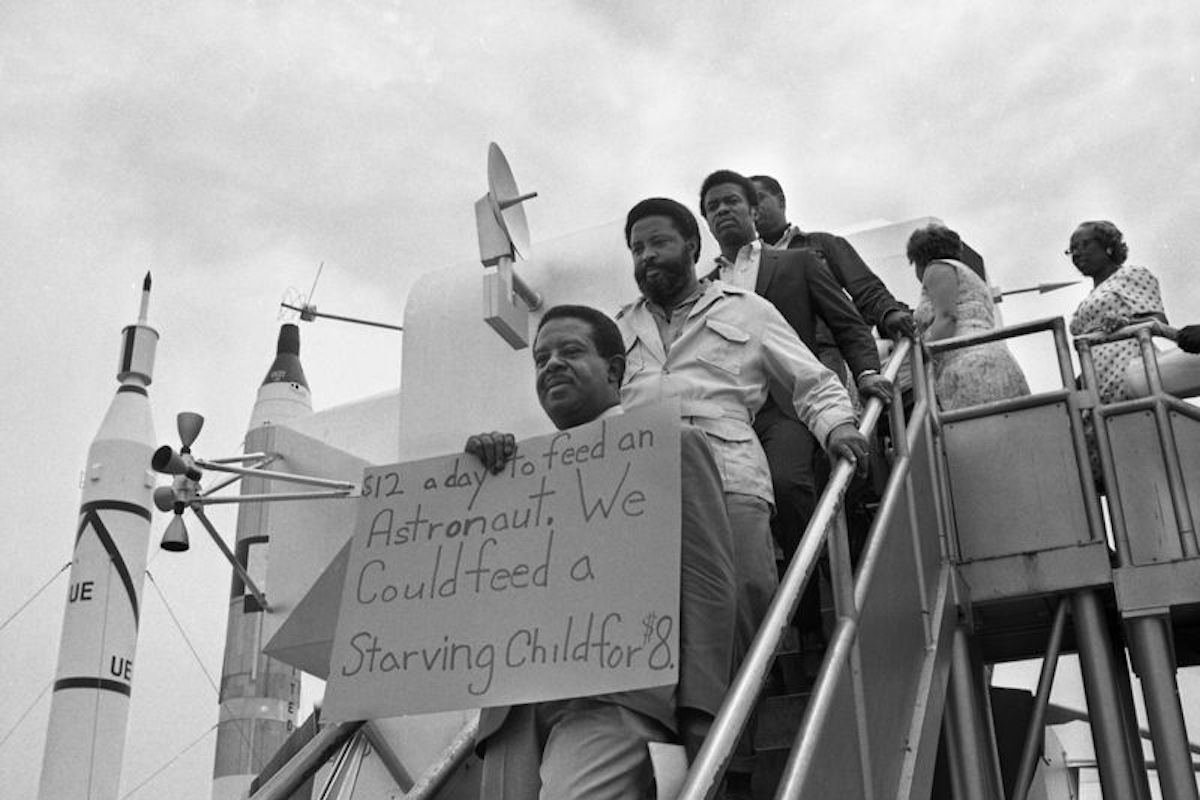 Bryan Greene, Smithsonian Magazine
Reverend Ralph Abernathy, flanked by associates, stand on steps of a mockup of the lunar module displaying a protest sign while demonstrating at the Apollo 11 launch. (Bettmann / Contributor). Featured Image
In anticipation of astronaut Neil Armstrong’s first step on the moon, an estimated 8,000 New Yorkers gathered in Central Park, eager to celebrate the moment. The New York Times ran a photograph of the crowd glued to the networks’ broadcasts on three giant screens and described the event as “a cross between a carnival and a vigil.” Celebrants came dressed in white, as encouraged by the city’s parks department. Waiting for the big show, they listened to the Musician’s Union orchestra play space-themed music and watched student artists dance in a “Moon Bubble,” illuminated by ultra-violet light.

That same day, about 50 blocks north, another estimated 50,000 people, predominantly African-American, assembled in Harlem for a soul-music showcase in Mount Morris Park headlined by Stevie Wonder, whose “My Cherie Amour” was climbing the Billboard charts. The parks department sponsored this event, too, but the audience was less interested in what was happening in the sky overhead. As the Times reported, “The single mention of the [lunar module] touching down brought boos from the audience.”

The reception in Harlem reflects a broader truth about the Apollo 11 mission and how many black communities viewed it. NASA’s moonshot was costly; author Charles Fishman called it “the largest non-military effort in human history” in a recent interview with NPR. Black publications like the New York Amsterdam News and civil rights activists like Ralph Abernathy argued that such funds—$25.4 billion, in 1973 dollars— would be better spent alleviating the poverty facing millions of African-Americans. Spoken word artist Gil Scott-Heron’s memorable poem “Whitey on the Moon” catalogued a host of genuine hazards and deprivations earthbound African-Americans endured while Armstrong and Buzz Aldrin hopped about on the moonscape. “No hot water, no toilets, no lights, while whitey’s on the moon” he rapped, adding that “all that money I made last year” went to the race to beat the Soviets to the moon.