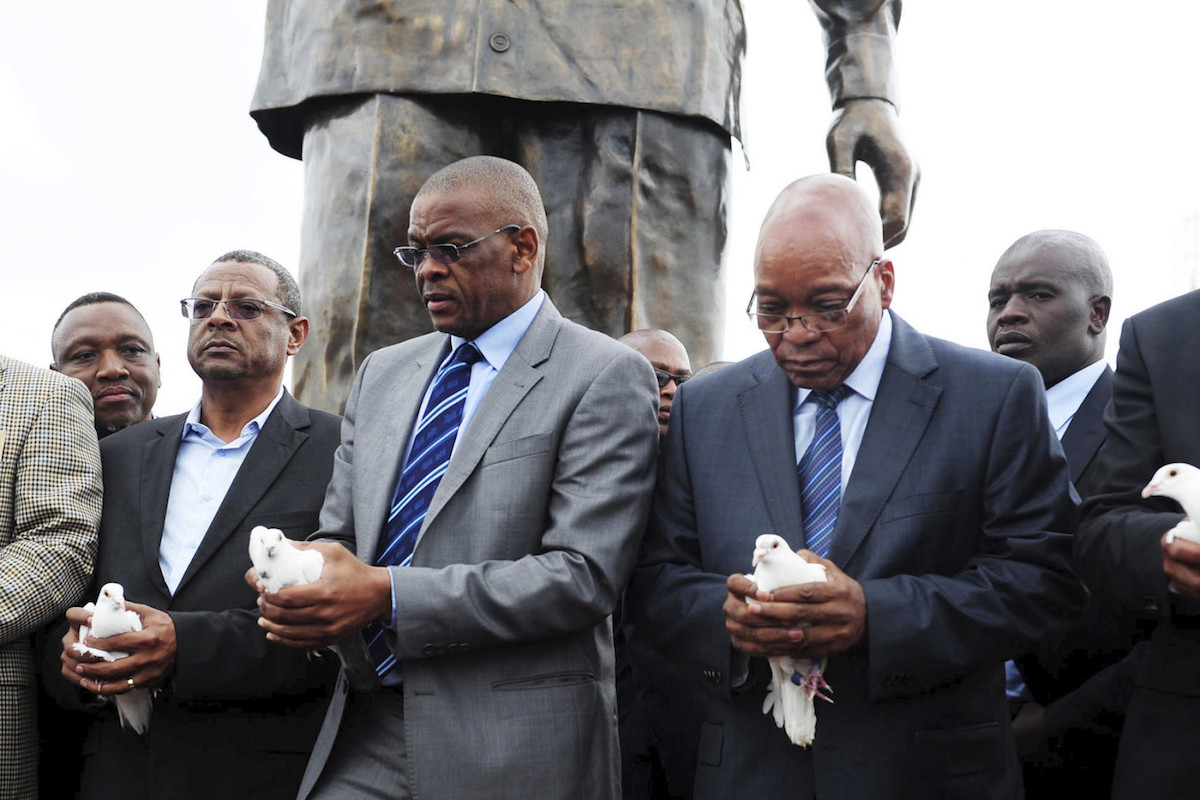 Pieter-Louis Myburgh, Foreign Policy
Jacob Zuma (right), the then-president of South Africa, and Ace Magashule, the then-premier of the Free State, ready to release white doves during the unveiling of the Nelson Mandela statue in Bloemfontein, South Africa, on Dec. 13, 2012. CHARL DEVENISH/ FOTO24 / GALLO IMAGES /GETTY IMAGES, Featured Image
On the day of the murder, Tshepo Thabane had been at his usual spot on the corner of South Road and Bowling Avenue since dawn. Like the other regular beggars who had made this intersection their base, the young man from the nearby Johannesburg township of Alexandra usually arrived in time for the great procession of luxury sedans and SUVs that trickled past toward nearby Sandton’s opulent business district each weekday. His earnings from that morning’s peak-hour traffic had been pretty good. With noon fast approaching, Thabane, a pseudonym, felt his mind starting to drift toward thoughts of lunch. As he counted the coins in his pocket, a gray Bentley Continental GT driving south toward him caught his attention. The impressive machine stood out even among the other expensive cars Thabane was accustomed to seeing at this crossing.

Meanwhile, Thabane noticed that a silver Audi A4 had snuck into the slipway that carries Bowling Avenue’s traffic into South Road going in the opposite direction, away from Sandton and toward Alexandra. It had come to a halt less than 50 feet from where the Bentley waited at the traffic light.

Then two men got out of the Audi, brandishing handguns. The car had tinted windows, but Thabane could make out the silhouette of a third man who remained waiting behind the steering wheel. The two men walked toward the stationary Bentley. Wearing a gray hoodie, the shorter of the two gunmen positioned himself in front of the sleek sedan. His accomplice, a tall, slender man wearing a blue top, stood right next to the driver’s window.

“Open the door!” Thabane heard the taller man shout in English. The Bentley driver understandably disobeyed. The taller gunman then tried to break the Bentley’s window by smashing it with his weapon, but he was unsuccessful. The driver hit the gas, forcing the gunman in gray to hop out of the way. The Bentley smashed into the car in front of it. That car’s driver panicked and sped off. The Bentley, however, failed to follow it across the intersection. The engine had either stalled or the driver was paralyzed by fear.