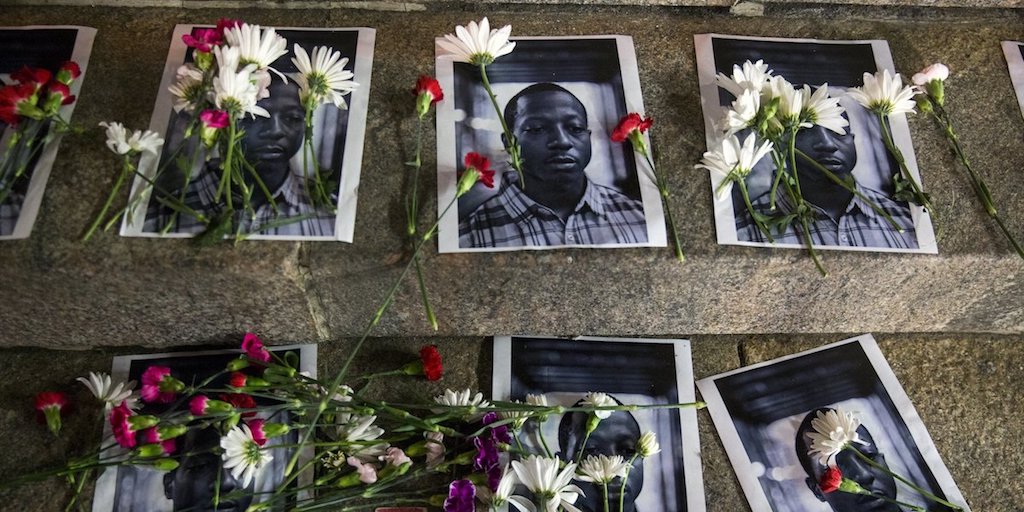 Benjamin Weiser, The New York Times |
Flowers rest on top of pictures Kalief Browder at a protest after his suicide in 2015. His family reached a settlement with the city on Thursday. Credit Lucas Jackson/Reuters . Featured Image
New York City has agreed to pay $3.3 million to settle a lawsuit on behalf of the estate of Kalief Browder, the young Bronx man whose detention on Rikers Island became a symbol of the breakdown in criminal justice in New York and fueled the drive to ban solitary confinement for youths in the city’s jails.

Mr. Browder, who was 16 years old when he was arrested in 2010 and accused of stealing a backpack, was detained on Rikers Island for three years — about two of which were spent in solitary confinement — without being tried or convicted of a crime. In 2015, at age 22, he hanged himself at his parents’ home in the Bronx.

The settlement, which is cited in a court document, was confirmed by the city and the family’s lawyer.

In a statement, the city’s Law Department said, “Kalief Browder’s story helped inspire numerous reforms to the justice system to prevent this tragedy from ever happening again, including an end to punitive segregation for young people on Rikers Island.