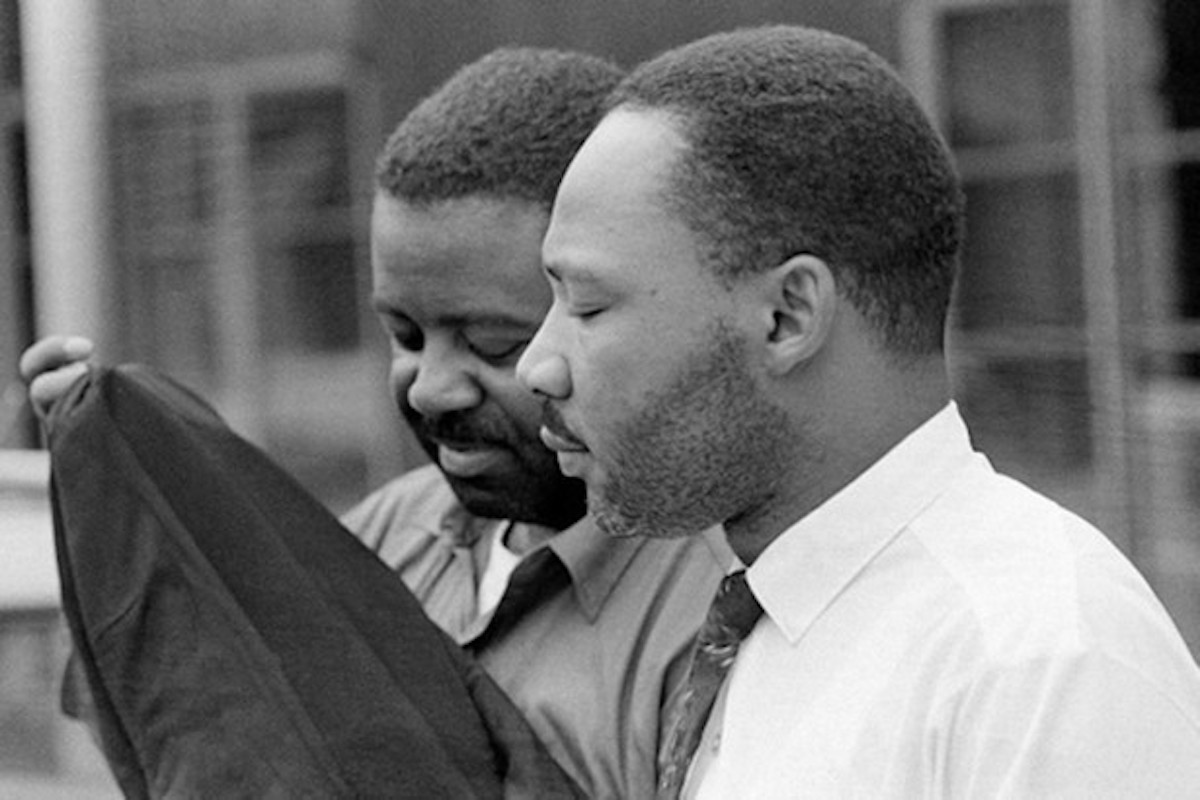 In April 1963, King was jailed in Birmingham, Alabama, after he defied a state court’s injunction and led a march of black protesters without a permit, urging an Easter boycott of white-owned stores. A statement published in The Birmingham News, written by eight moderate white clergymen, criticized the march and other demonstrations.

This prompted King to write a lengthy response, begun in the margins of the newspaper. He smuggled it out with the help of his lawyer, and the nearly 7,000 words were transcribed. The eloquent call for “constructive, nonviolent tension” to force an end to unjust laws became a landmark document of the civil-rights movement. The letter was printed in part or in full by several publications, including the New York Post, Liberation magazine, The New Leader, and The Christian Century.

While confined here in the Birmingham city jail, I came across your recent statement calling my present activities “unwise and untimely.” Seldom do I pause to answer criticism of my work and ideas. If I sought to answer all the criticisms that cross my desk, my secretaries would have little time for anything other than such correspondence in the course of the day, and I would have no time for constructive work. But since I feel that you are men of genuine good will and that your criticisms are sincerely set forth, I want to try to answer your statement in what I hope will be patient and reasonable terms.

I think I should indicate why I am here in Birmingham, since you have been influenced by the view which argues against “outsiders coming in.” I have the honor of serving as president of the Southern Christian Leadership Conference, an organization operating in every southern state, with headquarters in Atlanta, Georgia. We have some eighty-five affiliated organizations across the South, and one of them is the Alabama Christian Movement for Human Rights. Frequently we share staff, educational and financial resources with our affiliates. Several months ago the affiliate here in Birmingham asked us to be on call to engage in a nonviolent direct-action program if such were deemed necessary. We readily consented, and when the hour came we lived up to our promise. So I, along with several members of my staff, am here because I was invited here. I am here because I have organizational ties here.

But more basically, I am in Birmingham because injustice is here. Just as the prophets of the eighth century b.c. left their villages and carried their “thus saith the Lord” far beyond the boundaries of their home towns, and just as the Apostle Paul left his village of Tarsus and carried the gospel of Jesus Christ to the far corners of the Greco-Roman world, so am I compelled to carry the gospel of freedom beyond my own home town. Like Paul, I must constantly respond to the Macedonian call for aid.

Moreover, I am cognizant of the interrelatedness of all communities and states. I cannot sit idly by in Atlanta and not be concerned about what happens in Birmingham. Injustice anywhere is a threat to justice everywhere. We are caught in an inescapable network of mutuality, tied in a single garment of destiny. Whatever affects one directly, affects all indirectly. Never again can we afford to live with the narrow, provincial “outside agitator” idea. Anyone who lives inside the United States can never be considered an outsider anywhere within its bounds.