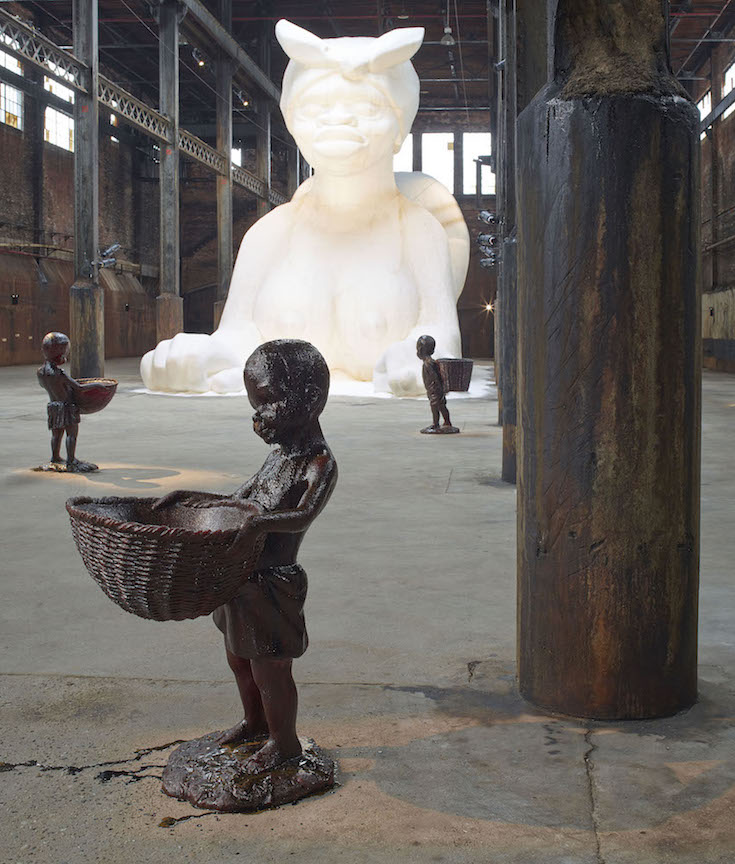 At the time of the debut of her most recent public-art project, which was also her first public-art project, Kara Walker would clandestinely ride her bike from her home in Fort Greene to the then-defunct Williamsburg Domino Sugar factory, in which her massive sculpture was housed. The sugar Sphinx was raised in the summer of 2014; crowds as big as 10,000 people gathered to visually consume, and to Instagram, the monumental sculpture. Back then, Walker had dyed the top of her cropped Afro blonde, and her vague purpose in visiting Domino, she tells me, involved evaluating the people who had come to evaluate her work: She wanted to see how the moment of encounter with the colossus could change their faces. But Walker’s presence disturbed things, she says — as soon as viewers noticed, their eyes turned from the idol onto her, then they flocked in her direction. She was slightly exhausted by that, she says, still seeming a bit surprised. “I don’t know, I thought maybe people would be focused on the white-but-black gigantic labia!”

Commissioned by the downtown public-art fund Creative Time, A Subtlety, or the Marvelous Sugar Baby induced, like any Kara Walker work, an equivocal ceremony of looking — who looks, at what, and how. The central sculpture — a Sphinx creature with the kerchiefed head of a mammy figure, her breasts naked, her vulva prominent — stood 35 feet by 75 feet, a chimera of unvarnished American desires, protected by an infantry of black-boy figurines carrying agricultural bounty, built from Walker’s sketches by a team of nearly 20 fabricators, the 3-D sculpting and milling firm Digital Atelier, and Sculpture House Casting. A foam skeleton overlaid with 40 tons of sugar, water, and resin, the Sugar Baby was the largest single piece of public art ever erected in New York City. It was also one of the biggest in another sense: The show attracted 130,000 visitors, briefly lived a convoluted life as a coveted social-media geo-tag, and seemed, given the many pilgrims it enticed, to herald a new future for public art in the city. As Nato Thompson of Creative Time told me, “Kara immediately understood what a different form public art can be.”

The Sphinx was not meant to be a crowd-pleaser; it was too challenging for that, with compressed politics that were the result of what Walker calls her “magical thinking.” The Sugar Baby’s extended title referred to the workers who had been degraded, maimed, underpaid, and killed in factories like this one: “an Homage to the unpaid and overworked Artisans who have refined our Sweet tastes from the cane fields to the Kitchens of the New World on the Occasion of the demolition of the Domino Sugar Refining Plant.” The sculpture was a feat of reengineering, its materials not only sugar but also the events running through it: the brutal repurposing of black human life for the rank, commercial lusts of white supremacy; the emphasis on black female biological potential over black female creativity; both the bygone and contemporary processes of gentrification that threaten to wipe all indications of these dark and abiding practices from the structures in which they occurred. The developer Two Trees, which underwrote much of A Subtlety, broke ground on its Domino project not long after, turning the site into new apartments, and the Sugar Baby was conceived to be wiped away, too — to be almost completely destroyed following its single showing. But while it was up, Walker wanted to be sure to scrutinize how it was received, and sent a camera crew to film the crowds as they preened, laughed, and selfied around her — producing a kind of surveillance footage. Then she screened the result at Sikkema Jenkins, the gallery that has represented her since 1995. 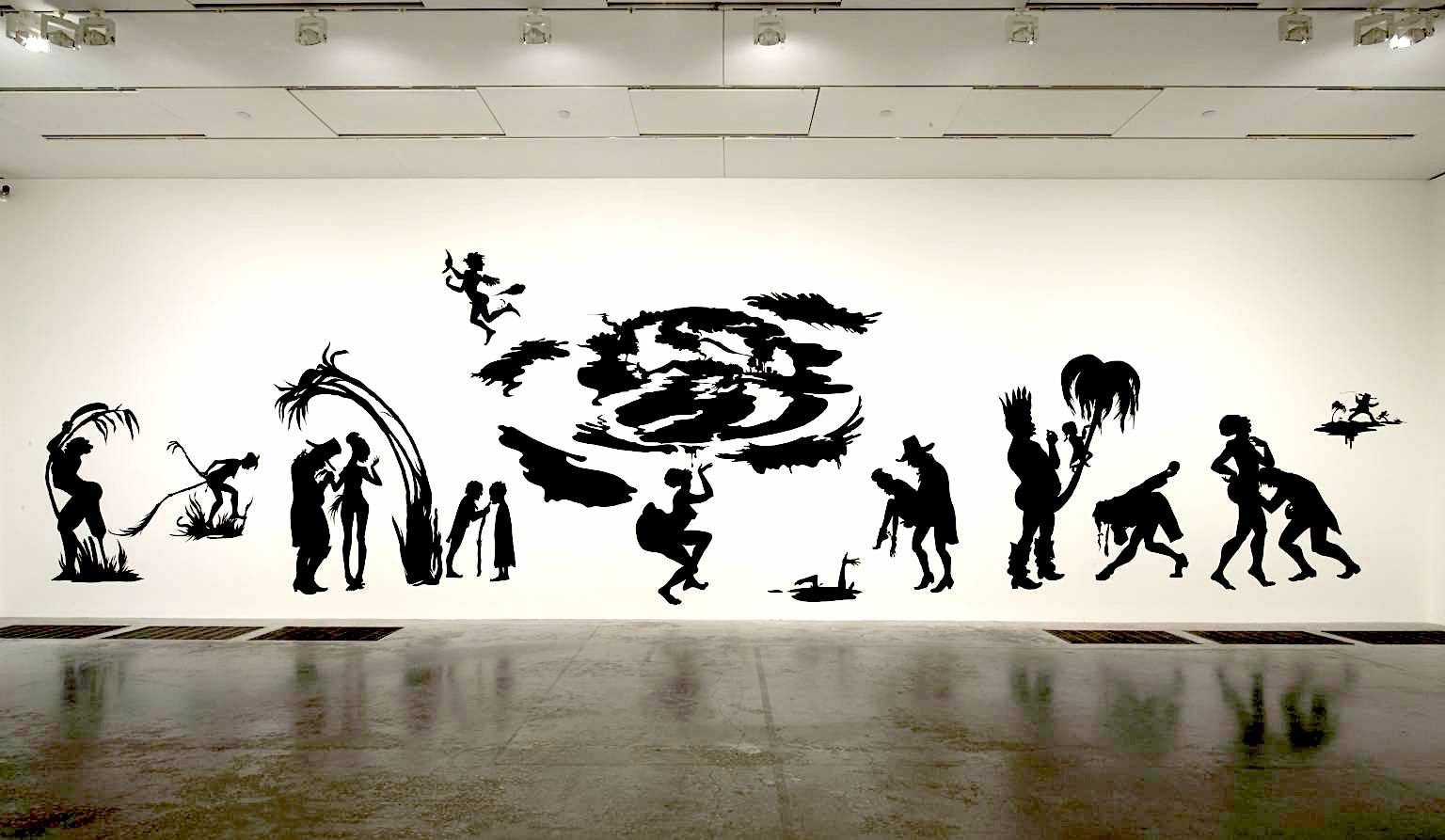 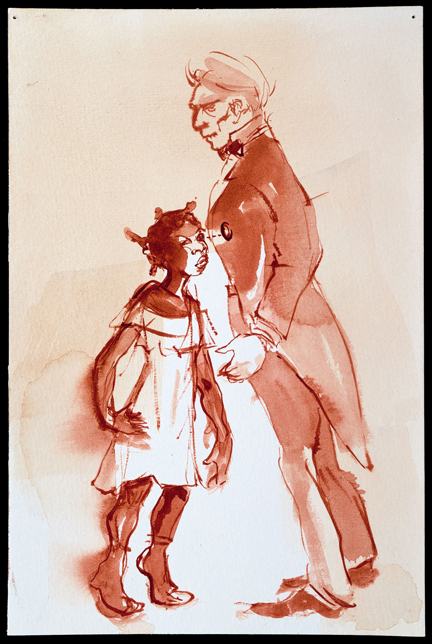 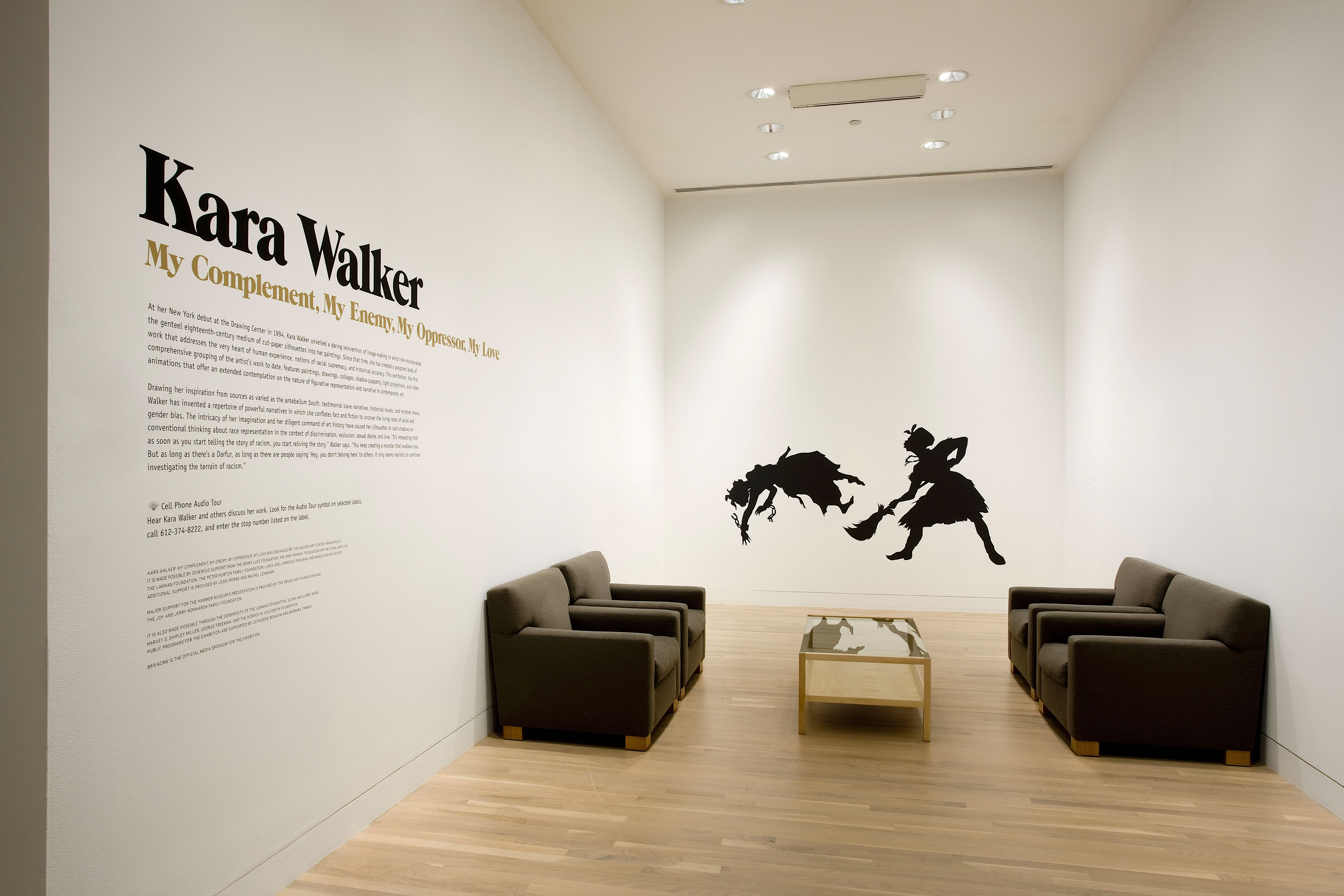 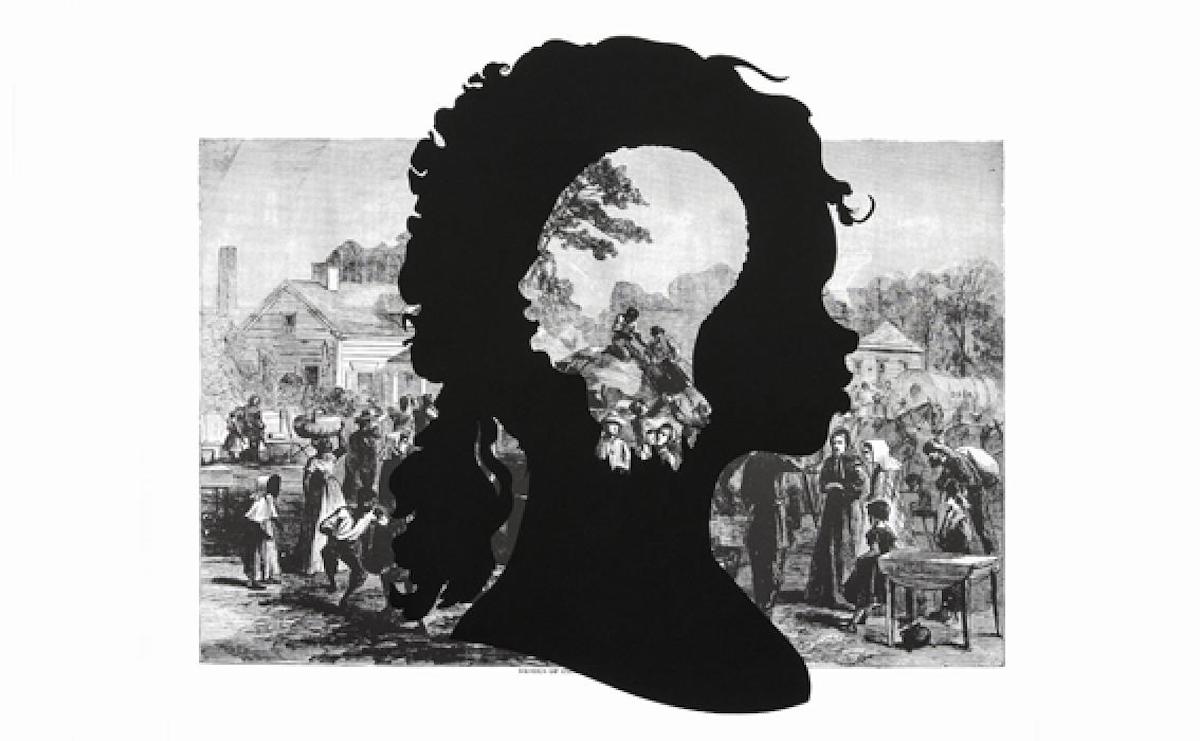 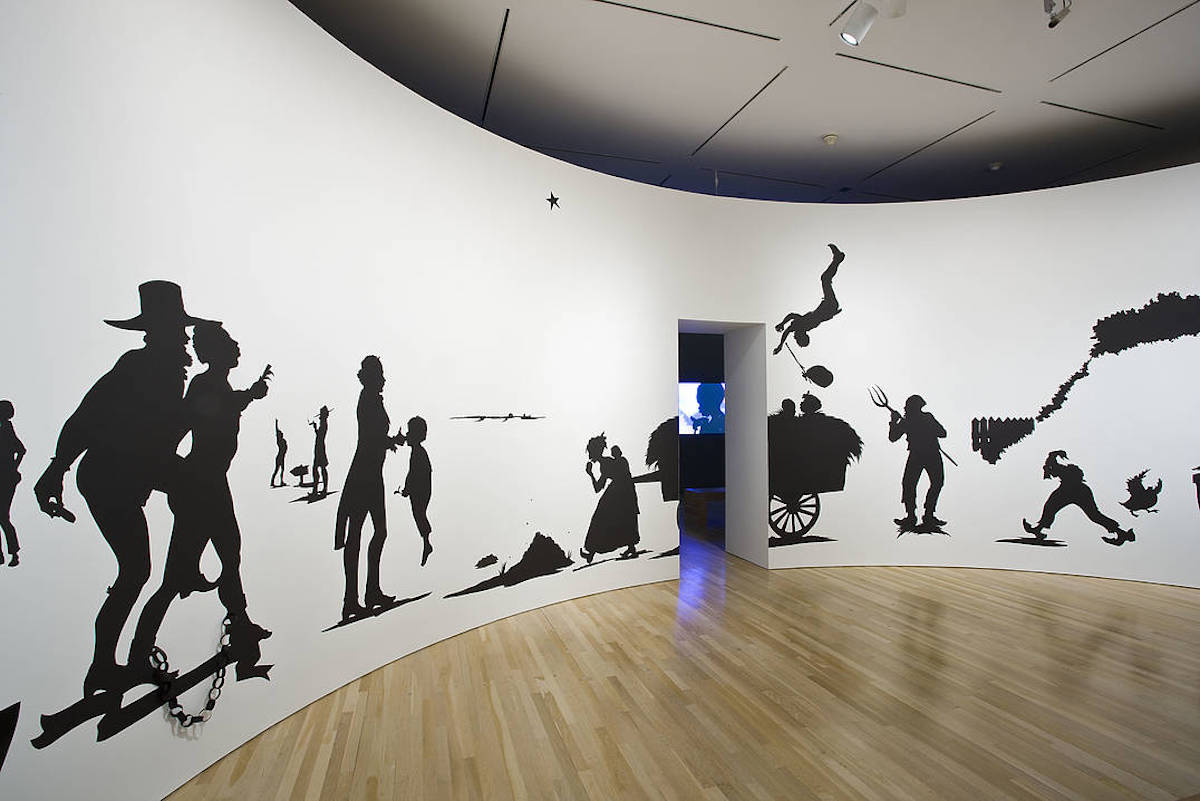 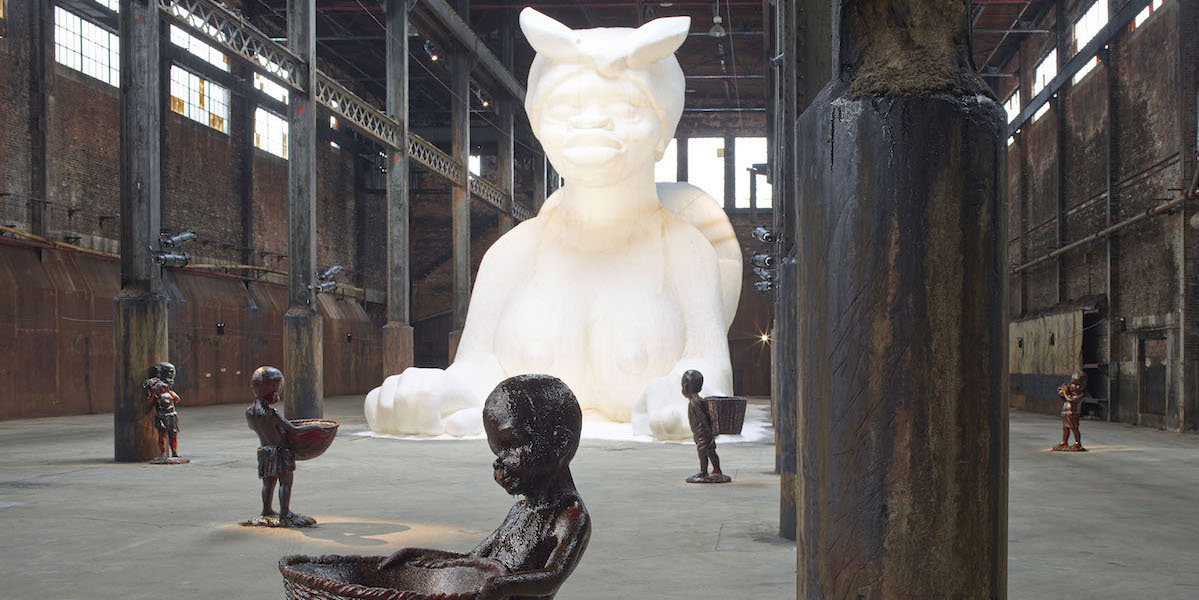 The Domino Sugar Refinery is a former refinery in the neighborhood of Williamsburg in Brooklyn, New York City. It was the original refinery of the American Sugar Refining Company, which produced Domino brand sugar. The current complex dates from 1882, when it was the largest sugar refinery in the world. Refining operations stopped in 2004, and as of 2017 the property is under redevelopment as office space, residential towers, and parkland. Several of the buildings in the complex were given landmark status in 2007. (Wikipedia).