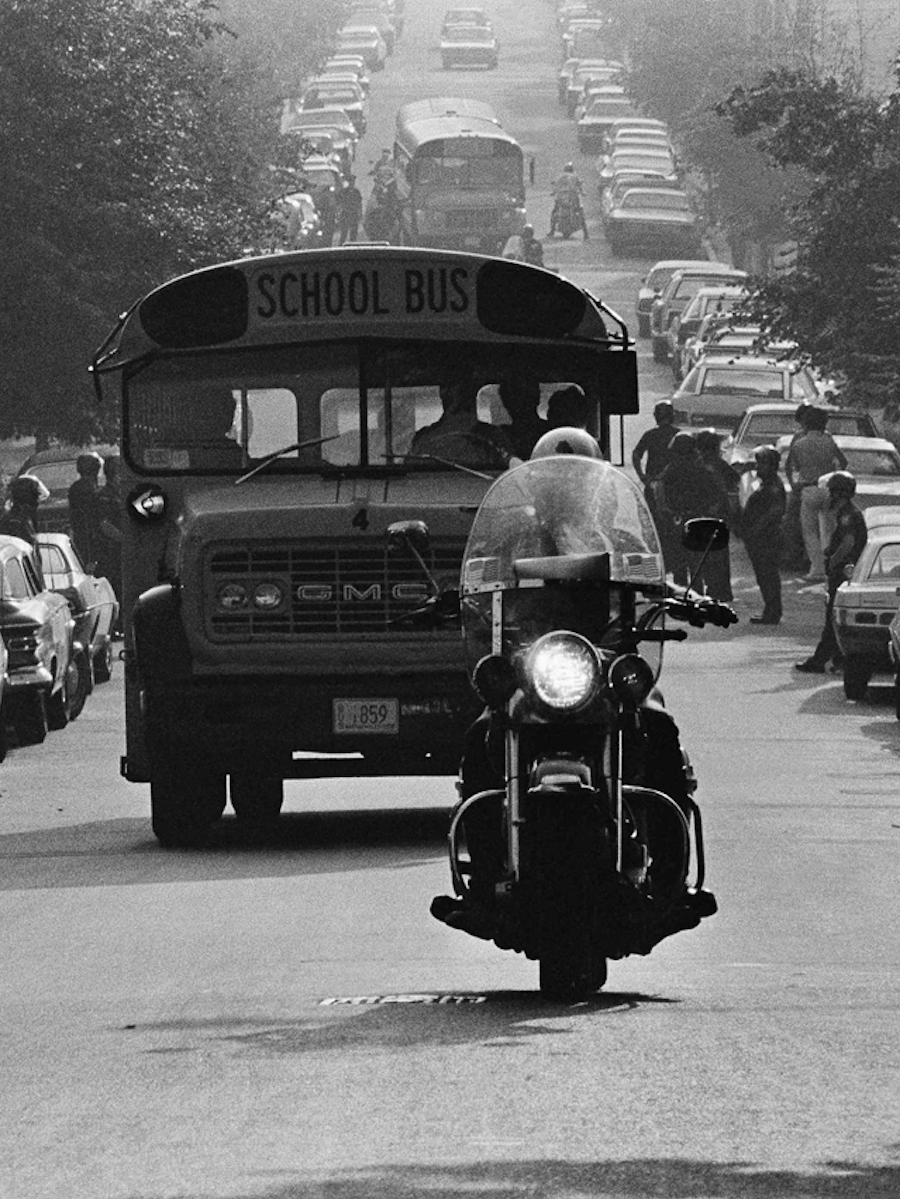 A Pioneer and Champion of Mid-20th-Century Cuban Modernism

Imogene Drummer, who is black, and Mary Linehan, who is white, were both hired as transitional aides following the federal court’s order to desegregate Boston’s schools.

On a September morning in 1974, Imogene Drummer shepherded a handful of nervous black students from Boston’s Roxbury neighborhood onto a bus for their first day at what was—until then—the all-white South Boston High School. This daily journey, though just a few miles, would become a symbol in the movement to desegregate Boston’s schools. “At no point did I expect what I experienced the first day of school,” Drummer recalled. “As we drove up to the school, we were greeted by thousands of people in the streets. They were yelling profanity, things like ‘n—–, go home,’ holding bananas up at the buses. That particular day, there was nothing thrown at buses, but as time went on they started breaking windows.”

Drummer, a black woman from Roxbury, quickly befriended Mary Linehan, a white woman from South Boston. Both had been hired by the school system as transitional aides to implement a federal court order desegregating Boston’s scho­ols by means of busing. Each morning, Drummer rode the bus with black students while Linehan waited in the school’s parking lot to de-escalate any conflicts. As racial tensions mounted around them, Drummer and Linehan developed a close connection—one that bridged their own racial differences and has endured more than four decades of evolving racial dynamics within Boston’s schools. Their friendship als­o served as a public symbol of racial solidarity at a time when their students desperately needed one.

Two boys threw objects at a bus carrying black students in Dorchester on the first day of school under the new busing system. GLOBE FILE 1974

Dunner felt no trepidation as she got ready for her first day at Roxbury High, though she was visibly annoyed by media attention at the school. GLOBE FILE 1974

In this Dec. 12, 1974 file photo, white students, who walked out of Boston’s Hyde Park High School, stand along the curb and jeer school buses carrying blacks home from the school. The nonprofit Union of Minority Neighborhoods is hosting group exercises across Boston in 2013, where participants talk about how the city’s busing crisis impacted them in the 1970s. Organizers hope it will unite people to fight for better access to quality public schools for all students, even as another new Boston school assignment system starts. (AP Photo/Frank C. Curtin, File)

Desegregation busing in the United States (also known as forced busing or simply busing) is the practice of assigning and transporting students to schools in such a manner as to redress prior racial segregation of schools, or to overcome the effects of residential segregation on local school demographics.

In 1954, the U.S. Supreme Court landmark decision in Brown v. Board of Education declared racial segregation in public schools unconstitutional. The process of integrating public schools met fierce resistance in the South where segregation laws took hold after the American Civil War and the Reconstruction era of the United States. In Northern and Western states, de facto segregation was the customary practice. Due to patterns of residential segregation, a principal tool for racial integration was the use of busing. In the 1971 Swann v. Charlotte-Mecklenburg Board of Education ruling, the Supreme Court ruled that the federal courts had the discretion to include busing as a desegregation tool to achieve racial balance. While the Swann decision addressed de jure segregation in the South, it failed to address de facto segregation which persisted elsewhere in the country. In Georgia, Governor Jimmy Carter saw that Swann was “clearly a one-sided decision; the Court is still talking about the South, the North is still going free”. In the 1974 Milliken v. Bradley decision, the U.S. Supreme Court placed an important limitation on Swann when they ruled that students could be bused across district lines only when evidence of de jure segregation across multiple school districts existed.

In the 1970s and 1980s, under federal court supervision, many school districts implemented mandatory busing plans within their district. A few of these plans are still in use today. An example of stiff resistance to desegregation busing was the Restore Our Alienated Rights movement in Boston.

Since the 1980s, desegregation busing has been in decline. Even though school districts provided zero-fare bus transportation to and from students’ assigned schools, those schools were in some cases many miles away from students’ homes, which often presented problems to them and their families. In addition, many families were angry about having to send their children miles to another school in an unfamiliar neighborhood when there was an available school a short distance away. The movement of large numbers of white families to suburbs of large cities, so-called white flight, reduced the effectiveness of the policy. Many whites who stayed moved their children into private or parochial schools; these effects combined to make many urban school districts predominantly nonwhite, reducing any effectiveness mandatory busing may have had. In addition, school districts started using magnet schools, new school construction, and more detailed computer-generated information to refine their school assignment plans.

Due to these efforts and the fact that housing patterns had changed, by the early 1990s, most school districts had been released from court supervision and ceased using mandatory busing to try to desegregate schools. However, many continued to provide a similar level of school bus services, because families had become accustomed to the transportation and to the school choice available in recent assignment programs.