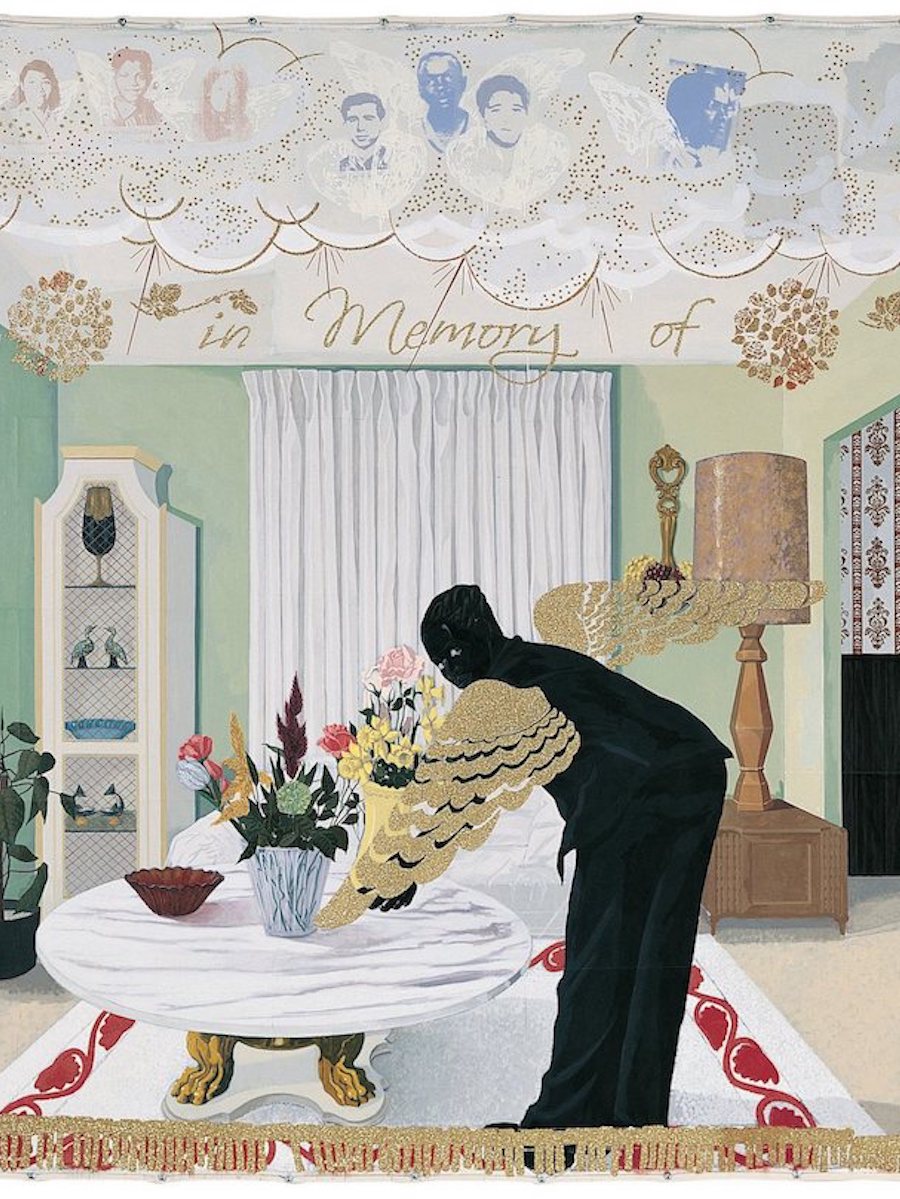 Jason Farago | The Guardian
[perfectpullquote align=”full” cite=”” link=”” color=”” class=”” size=”15″]This retrospective is a stone-cold stunner which proudly insists on the place of African Americans in the American artistic imagination, using the tropes of exclusionary imagery to new, more moral ends.[/perfectpullquote]
The election approaches; the nation seethes; the hatred festers; the dead start to talk. Old intolerances have come roaring back as the United States finally reaches the end of the most virulent, vacuous presidential contest in living memory. For African Americans, particularly, the catastrophe of Donald Trump’s candidacy has appeared almost as a punishment for the election of the first black president, and the overt, unashamed racism of his campaign, leavened with promises of violence, has affirmed that American history does not have an inbuilt happy ending.

In any other year, the recently opened retrospective of the paintings of Kerry James Marshall at New York’s Met Breuer would be a significant event. Against the current backdrop of racist demagoguery and national disbelief, it arrives as a godsend. This stone-cold stunner of a retrospective – spanning two floors of the Met’s luxury rental on Madison Avenue, and organized with judicious restraint by Ian Alteveer and Meredith Brown – proudly insists on the place of African Americans in the American artistic imagination. And yet that is only one of its achievements. It also, and perhaps more powerfully, grounds that placement inside a larger western artistic tradition, and utilizes the very tropes and techniques once used in exclusionary imagery to new, more moral ends. (The show opened last April at the Museum of Contemporary Art in Chicago, Marshall’s hometown; Michelle Obama made time to see it . It travels next year to the Museum of Contemporary Art in Los Angeles.)

A Portrait of the Artist as a Shadow of His Former Self, 1980. Photograph: Matthew Fried, © MCA Chicago/Kerry James Marshall

Kerry James Marshall (born October 17, 1955) is an American artist born in Birmingham, Alabama. He grew up in South Central Los Angeles[1] and now lives in Chicago, Illinois, where he previously taught at the School of Art and Design at the University of Illinois at Chicago. He is a 1978 graduate of Otis College of Art and Design.

Marshall is known for large-scale paintings, sculptures, and other objects that take African-American life and history as their subject matter. His work often deals with the effects of the Civil Rights movement on domestic life, in addition to working with elements of popular culture. In a 1998 interview with Bomb Magazine, Marshall observed,

Black people occupy a space, even mundane spaces, in the most fascinating ways. Style is such an integral part of what black people do that just walking is not a simple thing. You’ve got to walk with style. You’ve got to talk with a certain rhythm; you’ve got to do things with some flair. And so in the paintings I try to enact that same tendency toward the theatrical that seems to be so integral a part of the black cultural body.

One work, “Rythm Mastr”, is a superhero comic book based on African mythology and art set in an urban environment. Some of his other notable works include the Garden Project, which critiques the glorified names of housing projects that conceal desperate poverty and the Lost Boys series, which examines young black men “lost in the ghetto, lost in public housing, lost in joblessness, and lost in literacy.” His first major solo exhibition, which traveled throughout the country, was organized at the Renaissance Society at the University of Chicago in 1998. His work has been exhibited in many American and international exhibitions, including the Venice Biennale (2003) and the Documenta (1997 and 2007).