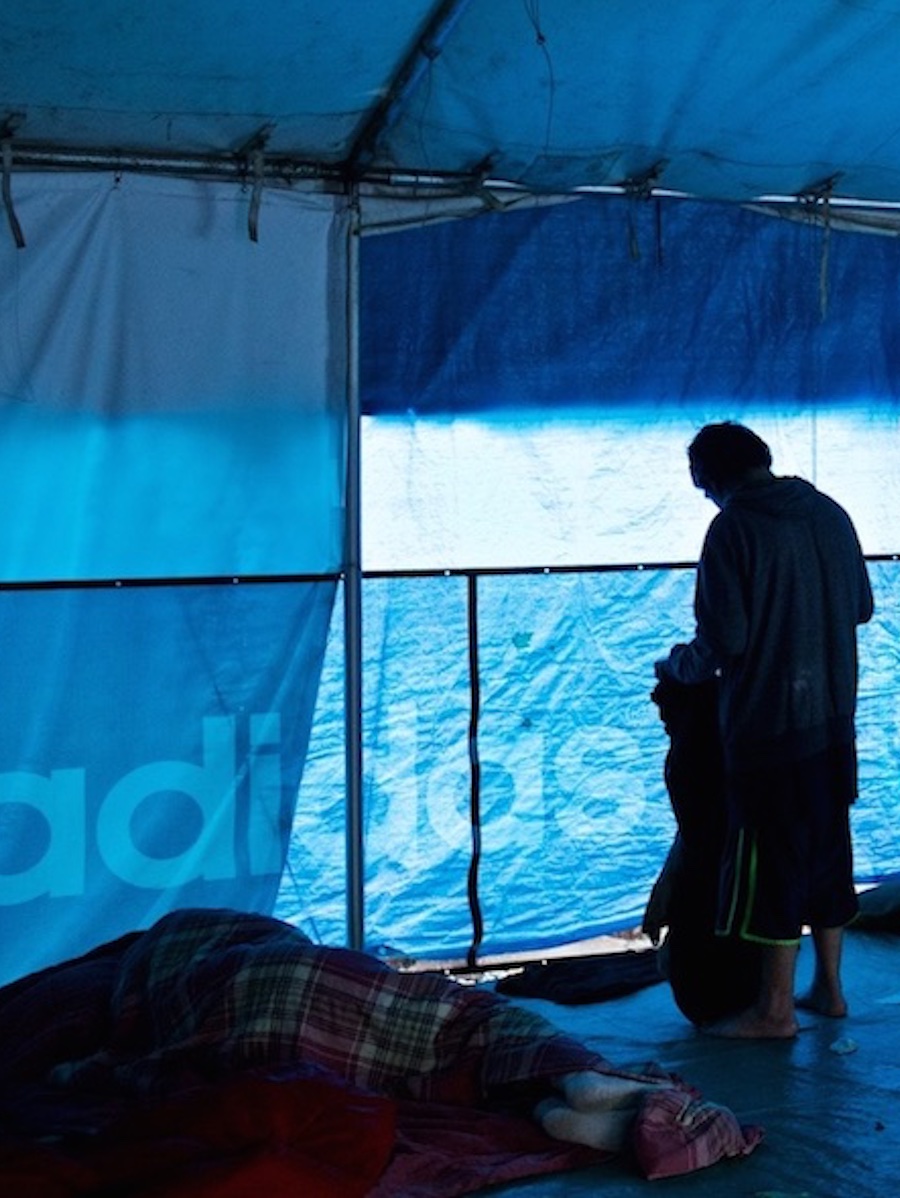 Patrick Strickland | Al Jazeera
[perfectpullquote align=”full” cite=”” link=”” color=”” class=”” size=”15″]Overlooked in the elections, Portland’s homeless are organizing their own camps on their own terms, but fear evictions.[/perfectpullquote]
Portland, Oregon, United States – When Marge Pettitt’s seven-year-old daughter broke down in tears in a homeless shelter in 2009, she made one of the hardest decisions of her life: Sending the child to live with her father, who had married another woman and moved into her apartment.

Marge, a 59-year-old with short greying hair and tobacco-stained fingers, found herself living on the streets after a difficult divorce 14 years ago. That year, she gave birth to her daughter, leaving the hospital and moving from one temporary homeless shelter to another before ending up back on the streets.

“I haven’t seen her in four years,” she says as she rolls a cigarette on a picnic table in Hazelnut Grove, a community for homeless people that is at risk of eviction.

Switching between English and Spanish, Marge, who is of Mexican-American descent, navigates memories of police harassment, sexual violence, humiliation and hunger. “They turn us [women] into men for a while,” she says casually. “You come in innocent and you end up tough.”

She is among the 564,708 people who are homeless in the United States, according to 2015 estimates by the National Alliance to End Homelessness. Of that total, at least 15 percent are classified as “chronically homeless” because they have lived on the streets for a year or more.

Timothy Ferrell, is a member of the Yakama tribe and he’s been on and off the streets for over 20 years. He says he’s managed so long by wearing the right clothes, traveling light, and finding places to sleep outdoors that others aren’t aware of. He keeps his belongings in a small storage unit on the eastside and is able to rotate sleeping bags and clothes to stay dry. Thomas Boyd/The Oregonian

Minister Johnny Brandford and volunteers hand out food and offer prayer to the homeless outside the Portland Rescue Mission on West Burnside. His “On the Move Ministries” offers assistance weekly to various transition projects in the Portland area. Thomas Boyd/The Oregonian

The men’s dorm houses residents in the addition recovery program but also allows a number of men to come off the street for the night. A lottery system is used to determine who gets a bed and many are often turned away. The Portland Rescue Mission provides emergency services of food and shelter at their downtown location on West Burnside. Thomas Boyd/The Oregonian

Ibrahim Mubarak founded the Right 2 Dream Too homeless center on West Burnside. The space was established in 2011. The nonprofit organization provides refuge and a safe space to rest or sleep undisturbed for Portland’s unhoused community who cannot access affordable housing or shelter. Thomas Boyd/The Oregonian

Lio Alaalatoa is an outreach worker with JOIN, the nonprofit that does most of the on-the-street outreach work. He spends several nights a week driving around the west side in a cargo van, often with the help of formerly homeless, Mark Poindexter. Thomas Boyd/The Oregonian
Portland, Oregon | CITY OF THE STATE OF OREGON, U.S.

Portland (/ˈpɔːrtlənd/) is the largest city in the U.S. state of Oregon and the seat of Multnomah County. It is located in the Willamette Valley region of the Pacific Northwest, at the confluence of the Willamette and Columbia Rivers. The city covers 145 square miles (380 square kilometers) and had an estimated population of 632,309 in 2015, making it the 26th most populous city in the United States. Approximately 2,389,228 people live in the Portland metropolitan statistical area (MSA), the 23rd most populous MSA in the United States. Its Combined Statistical Area (CSA) ranks 17th with a population of 3,022,178. Roughly 60% of Oregon’s population resides within the Portland metropolitan area.

Named after the city on the coast of Maine, the Oregon settlement began to be populated in the 1830s near the end of the Oregon Trail. Its water access provided convenient transportation of goods, and the timber industry was a major force in the city’s early economy. At the turn of the 20th century, the city had developed a reputation as one of the most dangerous port cities in the world, a hub for organized crime and racketeering. After the city’s economy experienced an industrial boom during World War II, its hard-edged reputation began to dissipate. Beginning in the 1960s, Portland became noted for its growing liberal political values, and the city has earned a reputation as a bastion of counterculture, which proceeded into the 21st century. According to a 2009 Pew Research Center study, Portland ranks as the eighth most popular American city, based on where people want to live.