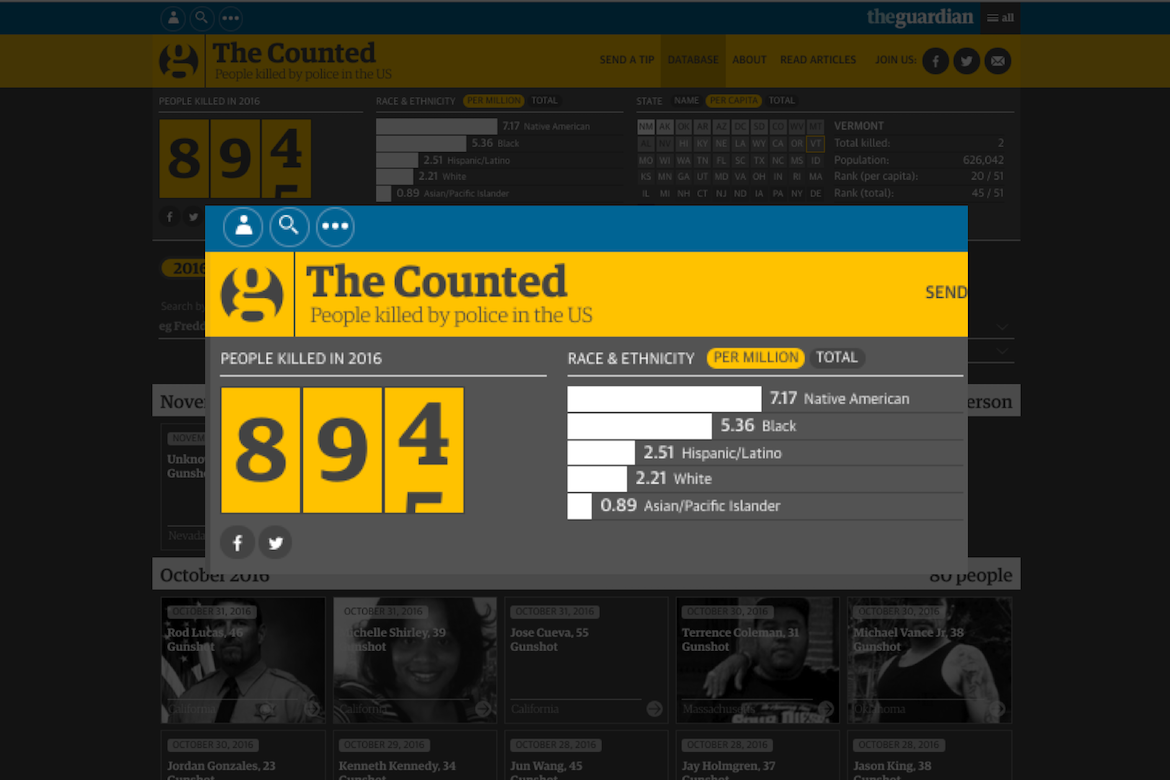 BY   The Guardian    PUB   The Guardian [perfectpullquote align=”full” cite=”” link=”” color=”” class=”” size=”15″]The Counted is a project by the Guardian – and you – working to count the number of people killed by police and other law enforcement agencies in the United States throughout 2015 and 2016, to monitor their demographics and to tell the stories of how they died.[/perfectpullquote]
The database will combine Guardian reporting with verified crowdsourced information to build a more comprehensive record of such fatalities. The Counted is the most thorough public accounting for deadly use of force in the US, but it will operate as an imperfect work in progress – and will be updated by Guardian reporters and interactive journalists as frequently and as promptly as possible.

Contributions of any information that may improve the quality of our data will be greatly welcomed as we work from a dearth of available information toward better accountability. Please contact us to pass on tips, links and multimedia as well as new information on existing cases already recorded.

It is reported by Jon Swaine, Oliver Laughland and Jamiles Lartey. It is designed and produced by Kenan Davis, Rich Harris, Nadja Popovich and Kenton Powell.

Why is this necessary?
The US government has no comprehensive record of the number of people killed by law enforcement. This lack of basic data has been glaring amid the protests, riots and worldwide debate set in motion by the fatal police shooting of Michael Brown, an unarmed 18-year-old, in Ferguson, Missouri, in August 2014.

Before stepping down as US attorney general in April 2015, Eric Holder described the prevailing situation on data collection as “unacceptable”.

The Guardian agrees with those analysts, campaign groups, activists and authorities who argue that such accounting is a prerequisite for an informed public discussion about the use of force by police.

Protesters chanted “Hands up, don’t shoot” outside of the governor’s mansion in St. Paul on Thursday after the fatal police shooting of Philando Castile. Credit Stephen Maturen/Getty Images

Ola Aromaye, center, chants as he and Jamie Davis, bottom, protest the shooting this week in Baton Rouge, La., of Alton Sterling, Thursday, July 7, 2016 in front of City Hall in Columbia, Mo. Protesters from Black Lives Matter and other groups and individuals marched through the streets. Sterling was shot at close range after being pinned down by two officers.(Daniel Brenner/Columbia Daily Tribune via AP)
Death in Custody Reporting Act of 2013
LEGISLATION, U.S. HOUSE OF REPRESENTATIVES
The Death in Custody Reporting Act of 2013 (H.R. 1447) is a bill that would require the United States Department of Justice to collect data from U.S. states and territories about the deaths of prisoners in their custody. States and territories would face monetary penalties for noncompliance. The bill would also require federal agencies to report on the deaths of prisoners in their custody. The Death in Custody Reporting Act of 2013 was introduced into the United States House of Representatives during the 113th United States Congress.