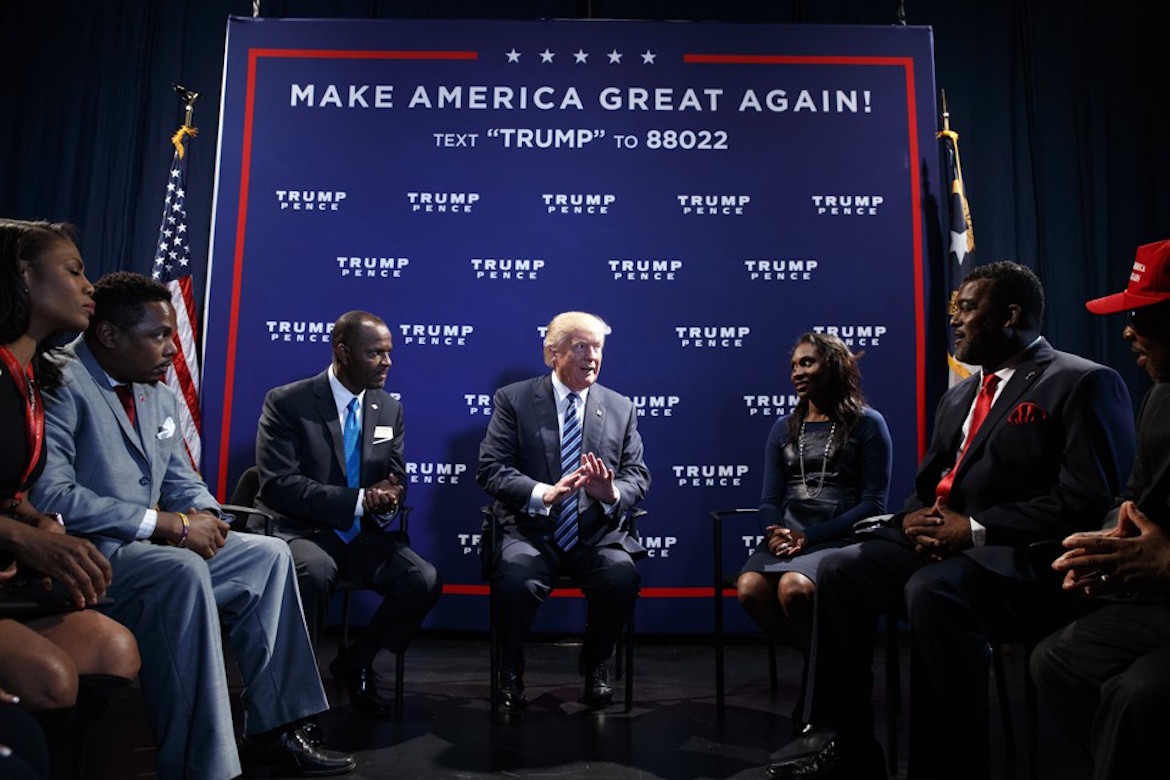 BY   David A. Graham    PUB   The Atlantic [perfectpullquote align=”full” cite=”” link=”” color=”” class=”” size=”15″]Even as the Republican launches a purported African American outreach campaign 12 days before the election, his aides say their goal is to depress turnout in the bloc.[/perfectpullquote]
It would be unfair to call Donald Trump’s interaction with black voters a love-hate relationship, since there’s little evidence of African American enthusiasm for Trump. But the Republican campaign has pursued a Janus-like strategy on black voters—ostensibly courting them in public while privately seeking to depress turnout.

This tension is on display in the last 24 hours. On Wednesday, Trump delivered a speech in Charlotte, North Carolina, advertised as an “urban renewal agenda for America’s inner cities.” Trump told the audience, “It is my highest and greatest hope that the Republican Party can be the home in the future and forevermore for African Americans and the African American vote because I will produce, and I will get others to produce, and we know for a fact it doesn’t work with the Democrats and it certainly doesn’t work with Hillary.”

Yet on Thursday, BusinessWeek published a big cover story, based on exclusive access to the campaign, that revealed that Trump’s team has decided that winning over black voters is a lost cause:

Instead of expanding the electorate, [campaign chairman Steve] Bannon and his team are trying to shrink it. “We have three major voter suppression operations under way,” says a senior official. They’re aimed at three groups Clinton needs to win overwhelmingly: idealistic white liberals, young women, and African Americans.

Republican presidential candidate Donald Trump meets with faith and community leaders before delivering a speech, Wednesday, Oct. 26, 2016, in Charlotte, N.C. (AP Photo/ Evan Vucci)
Voting Rights Act of 1965
FEDERAL LEGISLATION, U.S.
The Voting Rights Act of 1965 is a landmark piece of federal legislation in the United States that prohibits racial discrimination in voting. It was signed into law by President Lyndon B. Johnson during the height of the Civil Rights Movement on August 6, 1965, and Congress later amended the Act five times to expand its protections. Designed to enforce the voting rights guaranteed by the Fourteenth and Fifteenth Amendments to the United States Constitution, the Act secured voting rights for racial minorities throughout the country, especially in the South. According to the U.S. Department of Justice, the Act is considered to be the most effective piece of civil rights legislation ever enacted in the country.


The Act contains numerous provisions that regulate election administration. The Act’s “general provisions” provide nationwide protections for voting rights. Section 2 is a general provision that prohibits every state and local government from imposing any voting law that results in discrimination against racial or language minorities. Other general provisions specifically outlaw literacy tests and similar devices that were historically used to disenfranchise racial minorities.