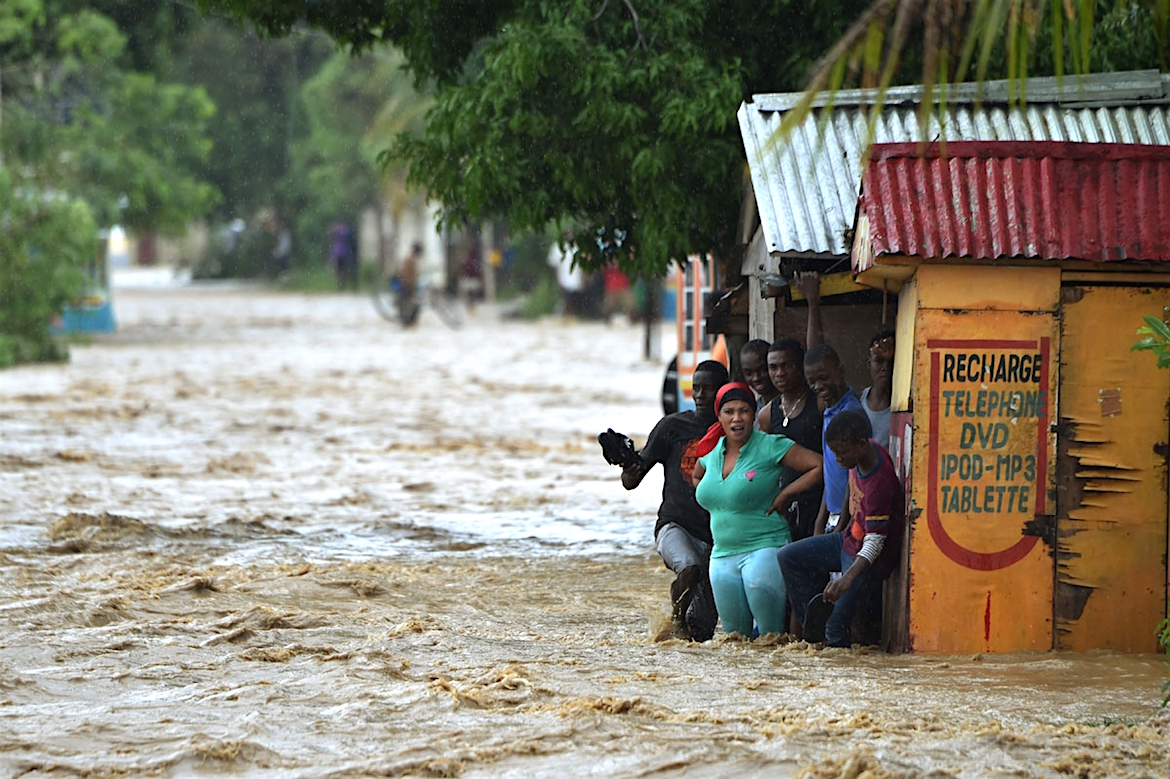 BY   Hector Retamal    PUB   L’Agence France-Presse (AFP) [perfectpullquote align=”full” cite=”” link=”” color=”” class=”” size=”15″]Port-au-Prince — As I made my way through Haiti in the wake of Hurricane Matthew, which killed hundreds and devastated parts of the impoverished island, I aimed to show exactly what I saw, without any filter of distance. You can’t but feel the grief, anger and pain when you see scenes like this, when a natural catastrophe takes away from those who already have so little in this world.[/perfectpullquote]
Because of bad communications, it took some time to learn the scope of the death and devastation that Matthew left behind after it ripped through the island on the night of October 3-4. Initial reports on the 4th, after the hurricane left Haiti and headed for Cuba, said that less than a dozen people had been killed. On the 6th, the death toll rose to 108. A few days later, it would be over 500 dead.

Because we know ahead of time that a hurricane will strike, we have time to prepare for coverage. When we learned, about a week before, that Matthew would make landfall in Haiti, we began to stock up on essential equipment, like batteries and provisions. But we never imagined just how intense the storm would be and just how devastating.

Covering a hurricane begins long before and ends long after it passes. Two days before it slammed into the island, as it still churned in the Caribbean, we drove around the capital Port-au-Prince to see how people were preparing for the storm. We found that many did not even know that a powerful hurricane — Matthew would smash into Haiti as a Category Four storm, on a scale of five — was headed their way. The fishermen of the impoverished Jeremie Wharf, knew. They didn’t go out to sea for a few days prior.

People try to cross the La Rouyonne river Leogane after the storm. (AFP / Hector Retamal)
Haiti
OFFICIALLY THE REPUBLIC OF HAITI
Haiti; Haitian Creole: Ayiti [ajiti]), officially the Republic of Haiti (French: République d’Haïti; Haitian Creole: Repiblik Ayiti), is a sovereign state in the Western Hemisphere (North America). The country is located on the island of Hispaniola, in the Greater Antilles archipelago of the Caribbean. It occupies the western three-eighths of the island, which it shares with the Dominican Republic. Haiti is 27,750 square kilometres (10,714 sq mi) in size and has an estimated 10.6 million people, making it the most populous country in the Caribbean Community (CARICOM) and the second-most populous country in the Caribbean as a whole.