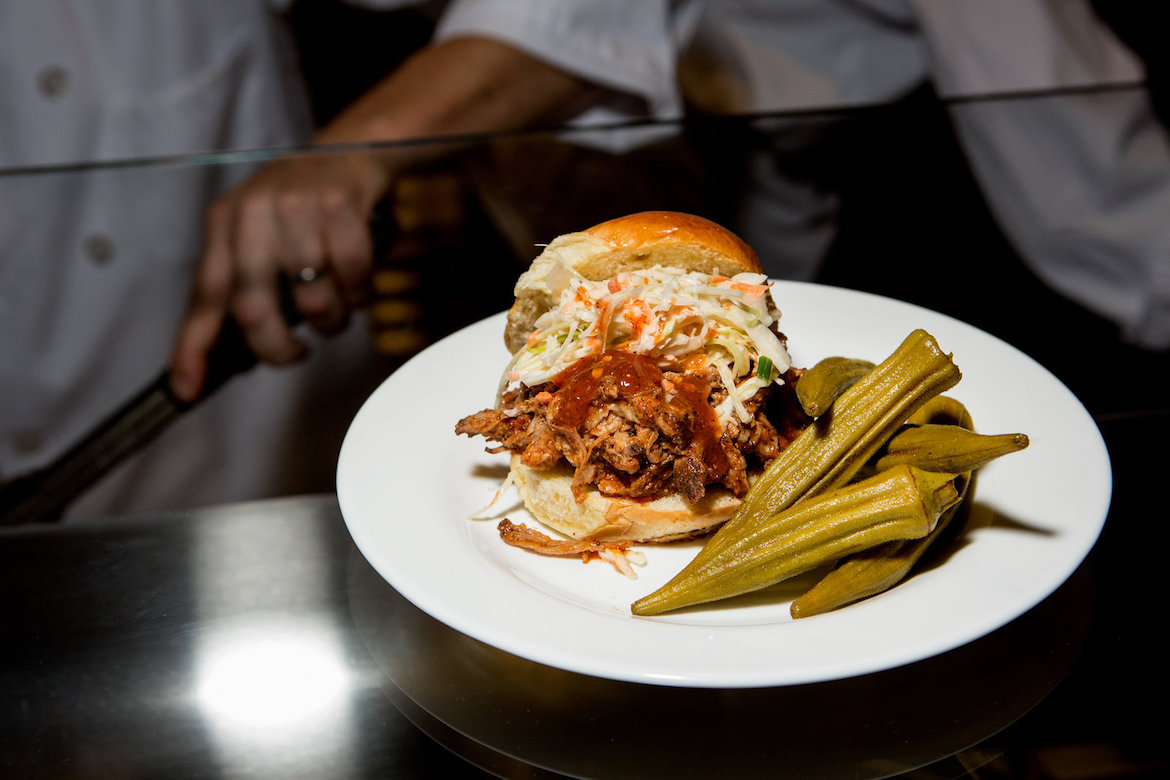 The idea is to expand people’s understanding of just how much African-Americans have contributed to our nation’s culinary heritage, says Joanne Hyppolite, curator for the cultural expressions exhibits that feature foodways, culture and cuisine.

“People think that African-Americans only created soul food,” Hyppolite says. But in fact, she says, black folks “had a long presence in kitchens all over the United States — whether that was in a railroad car, on ranches in the West, in wealthy people’s homes throughout the North and plantations to the South. They were there contributing to all types of American cuisine.”

Lexington-style BBQ pork sandwich, served with slaw and pickled okra, one of the offerings of the Agricultural South section of the Sweet Home Cafe. The restaurant inside the National Museum of African American History and Culture has a menu designed to highlight the breadth of black contributions to the nation’s cuisine.

Duck, Andouille and Crawfish Gumbo, with Carolina rice and green onion, which is served in the Creole Coast section of the cafe.

Sweet Home Cafe’s dining area feels like a gallery. Images and words that tell of African-Americans’ relationship with food surround you. A black-and-white photograph covers an entire wall. The subject: the Greensboro Four, sitting in protest of segregation at a Woolworth’s lunch counter in 1960. Ariel Zambelich/NPR
National Museum of African American History and Culture
SMITHSONIAN MUSEUM, WASHINGTON, D.C.
The National Museum of African American History and Culture (NMAAHC) is a Smithsonian Institution museum established in 2003. The museum’s building, designed by David Adjaye, is currently under construction on the National Mall in Washington, D.C.. Early efforts to establish a federally owned museum featuring African American history and culture can be traced to 1915, although the modern push for such an organization did not begin until the 1970s.
See Also