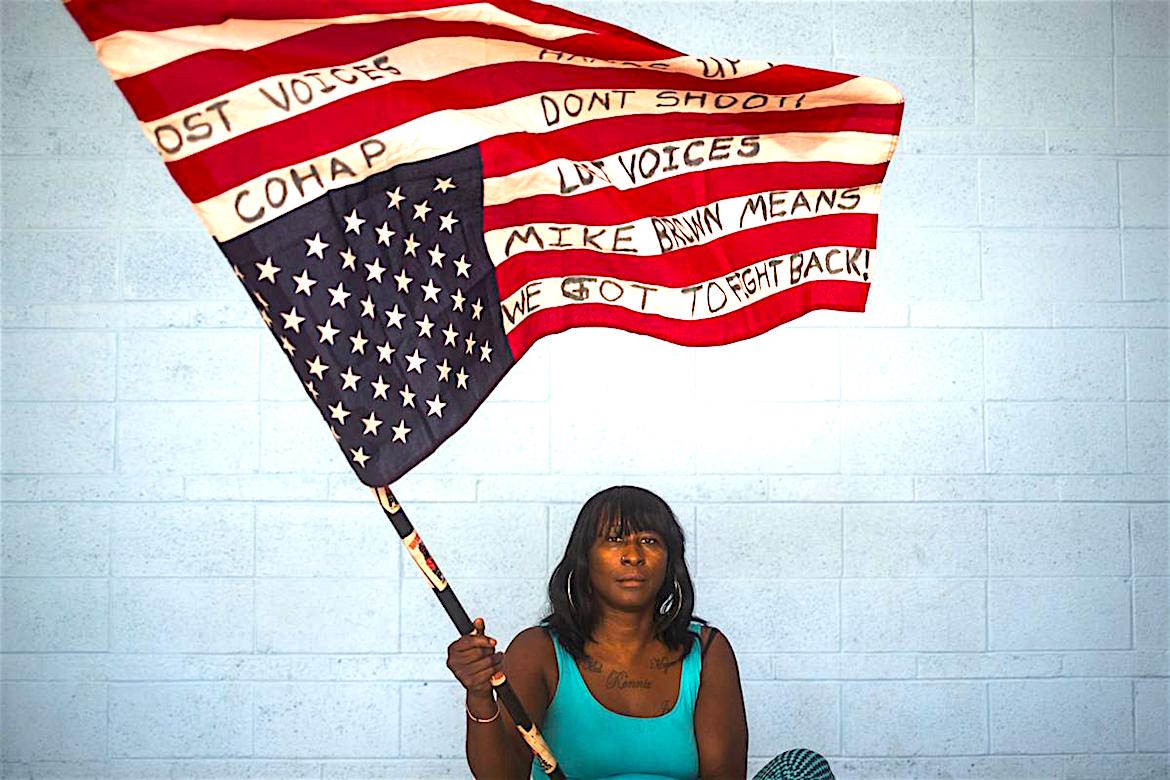 A Humanitarian Crisis in Haiti After Hurricane Matthew

BY   Molly Ball    PUB   The Atlantic [perfectpullquote align=”full” cite=”” link=”” color=”” class=”” size=”15″]Trump may have risen on the wings of white backlash. But black Americans’ fierce resistance to a candidate they see as racist could spell his defeat.[/perfectpullquote]
FERGUSON, Missouri—For a lot of people this year, but maybe especially for black people, the election seemed like a joke until it stopped being funny.

“I mean, is it even real? What’s going on?” said Corey Moore, 27, otherwise known as Memphis the Barber. At Freestyle Barber & Beauty, less than a mile from where Michael Brown was fatally shot by police in August 2014, Moore was laughing as he applied clippers to a young boy’s head. Then he sighed. “I don’t know, I just hope Trump don’t get in there, or we doomed,” he said. “I mean, Donald Trump? Are you serious? It’s funny, but it’s a lot more scary.”

Two years ago, the protests in Ferguson that followed Brown’s death galvanized African Americans—and many others—around what some see as a new civil-rights movement. Now, as a presidential election of historically divisive proportions nears conclusion, the black community has experienced it as a fresh trauma: As America’s first black president prepares to leave office, one of the major-party nominees appears to them to be not just a racist, but running on a platform of racism.

Some have argued that Trump’s nomination may have come as a white backlash to events like the Ferguson protests, which Trump has called “race riots.” But if Trump loses the presidential election, an outcome that looks increasingly likely, it will be due to the backlash to the backlash: the increasingly diverse American electorate, starting with an African American community that proved stubbornly resistant to Trump’s belated attempts to woo them.

The memorial of Michael Brown is seen on Aug. 10 at Canfield Apartments in Ferguson. The embattled St. Louis community marked the one year anniversary of Michael Brown being shot and killed by a Ferguson police officer on Aug. 9, 2014. His death sparked months of sometimes violent protests in Ferguson and drew nationwide focus on police treatment of black offenders. (Michael B. Thomas/AFP/Getty Images)

A woman holds a poster with the picture of police officer Darren Wilson during a Michael Brown memorial rally on Union Square Aug. 9 in New York. Demonstrators showed support on the one year anniversary on the death of 18-year-old Brown, an unarmed black teen who was shot and killed in Ferguson, Mo. (Kena Betancur/AFP/Getty Images)

Amarion Allen, 11-years-old stands in front of a police line shortly before shots were fired in a police officer involved shooting in Ferguson on Aug. 9. Two people were shot in the midst of a late night confrontation between riot police and protesters, after a day of peaceful events commemorating the fatal shooting of Michael Brown by a white officer one year ago. (Rick Wilking/Reuters)

Bridget Guthrie, 52, a pharmacy technician, poses for a portrait from the door of her residence in Ferguson on July 25. When asked how Michael Brown’s death affected her life, Guthrie said, “It has been a major inconvenience because the restaurants and businesses we used to frequent were destroyed and we have to go to other communities.” When asked what changes she has seen in her community over the past year, Guthrie said, “The community has become more close knit. People have become tighter as family, fight the cause and prove to the media what they put on television [about Ferguson] is wrong. Despite everything that happened, I still wouldn’t move because I love this community. It is a great community to live in.” (Adrees Latif/Reuters)

Lowkey, 16, who only wanted to be identified by his nickname, poses for a portrait in Ferguson on July 24. When asked how Michael Brown’s death affected his life, Lowkey said, “It made me grow up. It was devastating after Michael Brown died but I continue to see many more die. It has made me more depressed and angry at the world. It has made me grow hatred towards the law enforcement and judicial system.” When asked what changes he has seen in his community over the past year, Lowkey said, “There have been multiple changes. Gangs have stopped being violent. Kids walk around more joyfully. There is a sense of peacefulness and safety because the police are more aware of their actions.” On Aug. 9, 2014 a white police officer shot unarmed black teenager Michael Brown dead in the St. Louis suburb of Ferguson, Mo. A year later Reuters photographer Adrees Latif returned to Ferguson, where he has documented events in the past year, to capture the portraits of local residents and canvass their views. (Adrees Latif/Reuters)

Chocolate, 36, an activist who wants to be identified by only her nickname, waves an American flag upside down while posing for a portrait in Ferguson on July 24. When asked how Michael Brown’s death affected her life, Chocolate said, “My life won’t ever be the same. It has changed me to become an activist and protester. It has made me to get more involved with my community and especially with youth. When you ask a kid these days what they want to be when they grow up, their answer is “I want to be alive.” When asked what changes she has seen in her community over the past year, Chocolate said, “We are all still trying to heal. There are still a lot of racist cops here. We can do what we do which is stand up for justice. No one has accepted what happened out here. There is still a disconnect with the police and the community.” The message on the flag reads: Hands up, don’t shoot. Lost voices. Mike Brown means we got to fight back!. (Adrees Latif/Reuters)
Shooting of Michael Brown
FERGUSON, MISSOURI
The shooting of Michael Brown occurred on August 9, 2014, in Ferguson, Missouri, a northern suburb of St. Louis. Brown, an 18-year-old black man, was fatally shot by Darren Wilson, 28, a white Ferguson police officer. The disputed circumstances of the shooting sparked existing tensions in the predominantly black city, where protests and civil unrest erupted. The events received considerable attention in the U.S. and elsewhere, attracting protesters from outside the region. They generated a vigorous national debate about the relationship between law enforcement and African Americans, and about police use-of-force doctrine in Missouri and nationwide. A St. Louis County grand jury decided not to indict Wilson, and he was exonerated of criminal wrongdoing by the United States Department of Justice.


Shortly before the shooting, Brown stole several packages of cigarillos from a nearby convenience store and shoved the store clerk who tried to stop him, according to the U.S. Department of Justice examination. Brown was accompanied by his friend Dorian Johnson. Wilson had been notified by police dispatch of the robbery and descriptions of the two suspects. He encountered Brown and Johnson as they were walking down the middle of the street. Wilson said that he realized that the two men matched the robbery suspects’ descriptions. Wilson backed up his cruiser and blocked them. An altercation ensued with Brown and Wilson struggling through the window of the police vehicle for control of Wilson’s gun until it was fired. Brown and Johnson then fled, with Wilson in pursuit of Brown. Brown stopped and turned to face the officer, then Brown moved toward him. Wilson fired at Brown several times, all shots striking him in the front, with the possible exception of the two bullets fired into Brown’s right arm. In the entire altercation, Wilson fired a total of twelve bullets; the last was probably the fatal shot. Brown was unarmed and moving toward Wilson when the final shots were fired. Witness reports differed as to what Brown was doing with his hands when he was shot, but the U.S. Department of Justice found that those witnesses who said that Brown had his hands up in surrender were not credible.

The shooting sparked unrest in Ferguson. The “hands up” account was widely circulated within the black community immediately after the shooting and it contributed to the strong protests and outrage about the killing of the unarmed man. The U.S. Department of Justice did not conclude that the “hands up” account was inaccurate until months later. Believing accounts that Brown had his hands up in surrender when he was shot, protesters chanted, “Hands up, don’t shoot.” Protests, both peaceful and violent, along with vandalism and looting, continued for more than a week in Ferguson; police established a nightly curfew. The response of area police agencies in dealing with the protests was strongly criticized by the media and politicians. There were concerns over insensitivity, tactics, and a militarized response. Missouri Governor Jay Nixon ordered local police organizations to cede much of their authority to the Missouri State Highway Patrol.

A grand jury was called and given extensive evidence from Robert McCulloch, the St. Louis County Prosecutor. On November 24, 2014, McCulloch announced that the St. Louis County grand jury had decided not to indict Wilson. On March 4, 2015, the U.S. Department of Justice reported the conclusion of its own investigation and cleared Wilson of civil rights violations in the shooting. It found that forensic evidence supported the officer’s account, that witnesses who corroborated the officer’s account were credible, and that witnesses who had incriminated him were not credible, with some admitting that they had not directly seen the events. The U.S. Department of Justice concluded that Wilson shot Brown in self-defense.