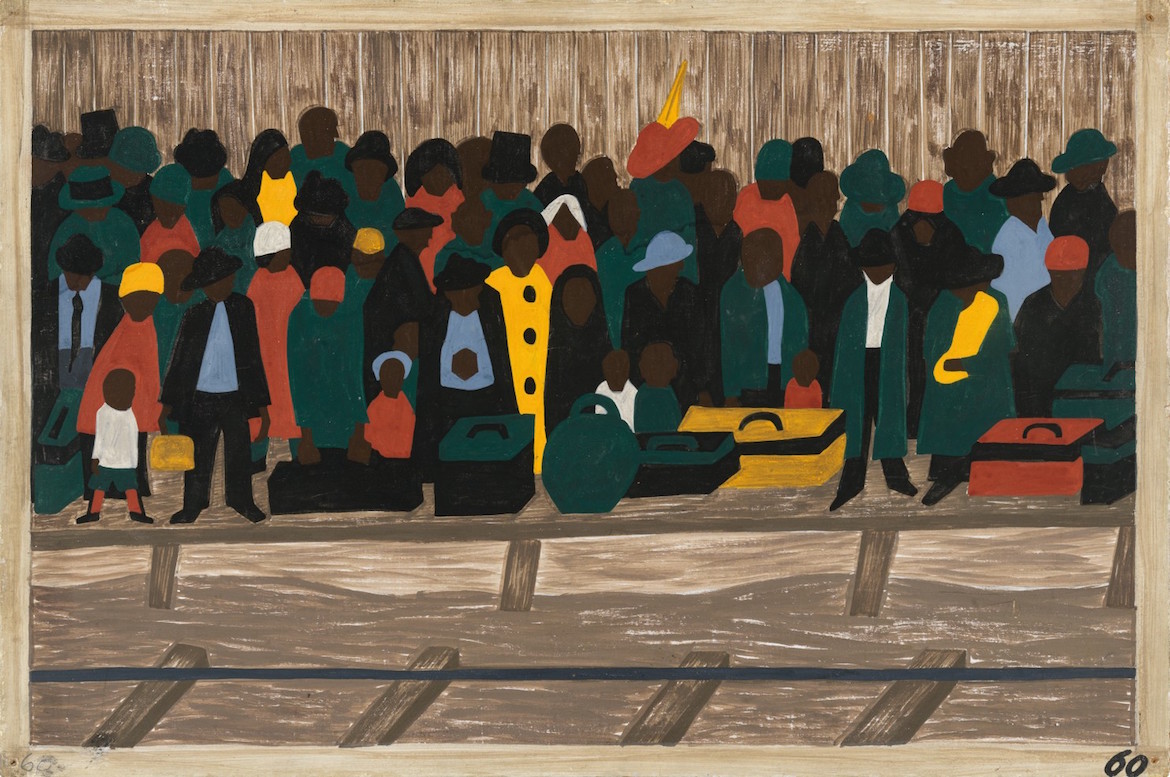 21 of the Missing Chibok Schoolgirls Have Been Released

BY   Anne Midgette    PUB   The Washington Post [perfectpullquote align=”full” cite=”” link=”” color=”” class=”” size=”15″]Jacob Lawrence’s “Migration Series,” unfolding across 60 painted panels each less than a foot square, is often compared to a film. [/perfectpullquote]
It’s more like a musical score. It takes several clear themes — recurring subject matter; a unified color palette, and a visual vocabulary of vertiginously tilted planes and angles and snaky organic curves — and works a sequence of variations on them. “During World War I there was a great migration north by southern African Americans,” runs the caption to the first panel, which shows an interlocking jumble of bodies, like a jigsaw, in simple flat planes of unmixed color. And, interspersed with panels showing drought and race riots, tenements and prison time, the theme of the migrants returns, and returns, all the way through to No. 60: “And the migrants kept coming.”

The “Migration Series” retains legendary status. Documenting the move of hundreds of thousands of African Americans from the South to the North in the first half of the 20th century, it was an immediate and explosive success for Lawrence, who was 23 when he painted it in 1941; 26 of its panels were reproduced over four double-pages in “Fortune” magazine before the series was even shown in a gallery. There was tremendous interest from collectors, though Lawrence didn’t want to break up the series, which he had painted as a unit, spreading all 60 panels out and applying the same unmixed colors — forest green, cornflower blue, rich yellow and a cool variant of burnt sienna — across them all, one color at a time. In the end, the series was split between the Museum of Modern Art, which got the even-numbered works, and the Phillips Collection, which got the odd ones, so that each collection at least traced the overall narrative arc. The series has now been reunited for a traveling exhibition, which was shown last year at MoMA and has now come to the Phillips.

“The Migration Series, Panel No. 50: Race riots were numerous. White workers were hostile toward the migrant who had been hired to break strikes.” (The Museum of Modern Art /Copyright the Jacob and Gwendolyn Knight Lawrence Foundation/Artists Rights Society )

“The Migration Series, Panel No. 42: To make it difficult for the migrants to leave, they were arrested en masse. They often missed their trains.” (The Museum of Modern Art/Copyright the Jacob and Gwendolyn Knight Lawrence Foundation/Artists Rights Society )

“The Migration Series, Panel No. 60: And the migrants kept coming.” 1940-41. (The Museum of Modern Art/Copyright the Jacob and Gwendolyn Knight Lawrence Foundation, Seattle / Artists Rights Society)
Jacob Lawrence
ACADEMIC, PAINTER (1917–2000)
Jacob Lawrence was an American painter, and the most widely acclaimed African-American artist of the 20th century. He is best known for his Migration Series.


Born in New Jersey but raised in New York City’s Harlem, Jacob Lawrence was the most widely acclaimed African-American artist of the 20th century. Known for producing narrative collections like the Migration Series and War Series, he brought the African-American experience to life using blacks and browns juxtaposed with vivid colors. He also taught, and spent 15 years as a professor at the University of Washington.