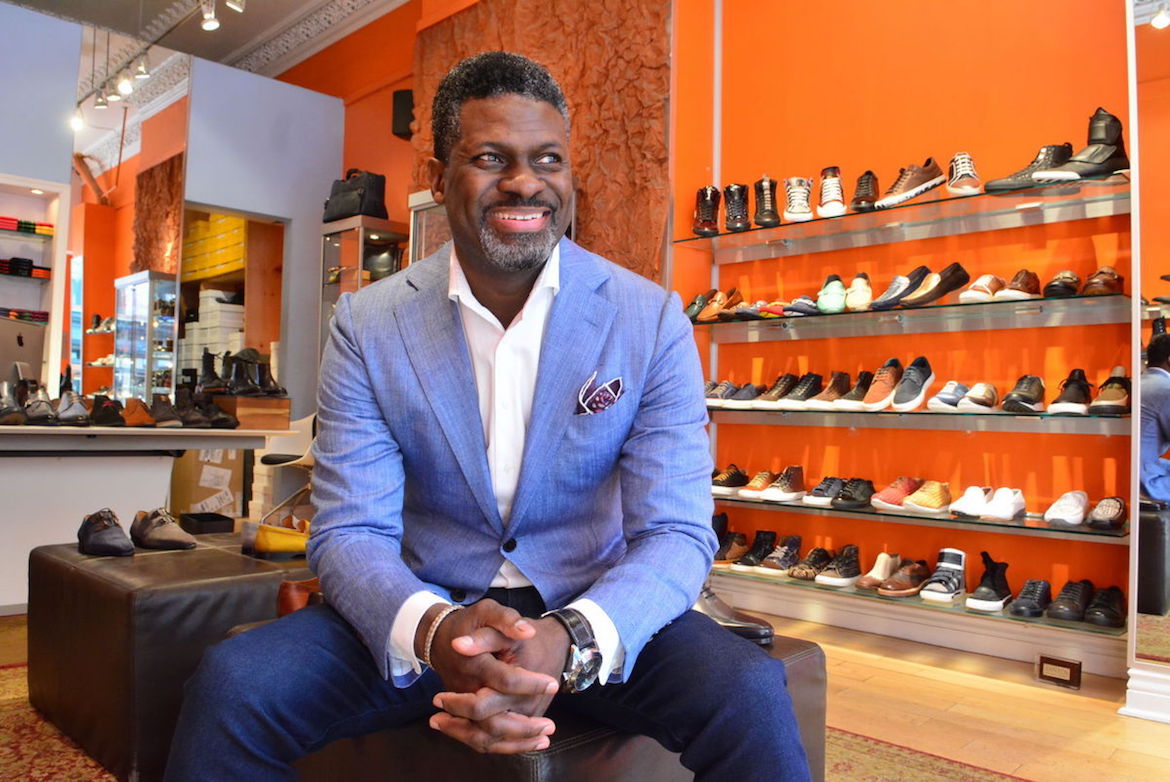 BY   Bobbi Booker    PUB   The Philadelphia Tribune [perfectpullquote align=”full” cite=”” link=”” color=”” class=”” size=”15″]As the owner of the Center City’s destination men’s shoe store, Steve Jamison could easily marvel about the path he took before opening Blue Sole Shoes. The North Philly native recalled a childhood eating government-issued cheese and patching up holes in the bottom of his sneakers.[/perfectpullquote]
“As a kid, I remember seeing gang fights and being hungry a lot of the time,” Jamison said. “Often times I’d open the fridge and find nothing but a pitcher of Kool-Aid. But, we learned to be resourceful by making mayonnaise sandwiches and syrup sandwiches. We did what we had to do to get by.”

To become a successful minority business owner, Jamison had to combine hard work and tenacity along with risk and luck.

“It only took 33 years,” he joked in recalling how it all started. He was first bit by the shoe fashion bug as a boy when given a pair of stylish pair of designer shoes. “My mom gave me my first pair of fashion shoes, a brown pair of Pierre Cardin. I put them on and I noticed the reaction I got from people. People just loved them and talked so much about them and how I looked good in them. I think it was the initial reaction that caused the attraction for me. Outside of that, it is just fashion in general that I love. I think it is amazing, really, how people look so different and feel so different about themselves when they put the right kind of clothing on, and of course that includes shoes.”


AAMP currently houses four galleries and an auditorium, each of which offers exhibitions anchored on one of three dominant themes: The African Diaspora, the Philadelphia Story, and the Contemporary Narrative.

The Museum is home to more than 750,000 objects, images and documents that are made available for research, exhibitions, for loan to other museums, and used in the Museum’s many educational programs. Temporary exhibits, as well as a variety of family events, workshops, films, tours, symposiums, and concerts relating to African-American culture and history are offered.

The AAMP’s collection is composed of flyers, memos and memorabilia related to the Philadelphia Black Panthers, correspondence clippings and military artifacts of the first black doctor to direct a U.S. Army Hospital, academic and legal papers from Harry Shapiro on constitutional issues arising from the Civil Rights Movement, African American occupational and domestic objects, family scrapbooks, sports memorabilia, church and burial records, artifacts from the Ku Klux Klan, and much more. Refer to the museums website for a complete listing