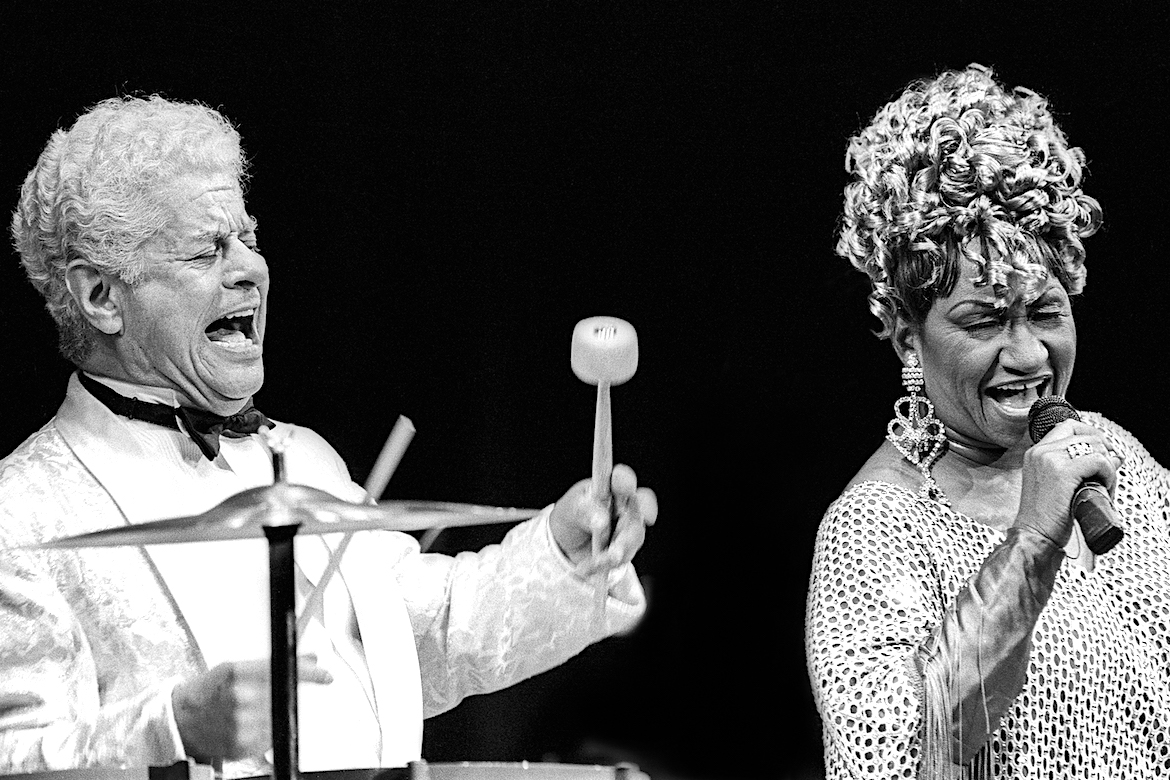 BY   Placide Magambo    PUB   Okay Africa [perfectpullquote align=”full” cite=”” link=”” color=”” class=”” size=”15″]El Barrio Latin Jazz Festival happens every year in Harlem to celebrate the birthplace of Latin Jazz Music and to commemorate its king, the late Tito Puente. [/perfectpullquote]
Last month in Harlem’s Marcus Garvey Park, thousands of people from different backgrounds, danced Salsa to the sounds of Puente’s son Tito Puente Jr who is carrying on his father’s musical legacy. We went to talk to the master percussionist about his father and Latin Jazz music’s connection to the African diaspora.

“Mister Ernesto Antonio Tito Puente himself was raised right here, this is where Latin Jazz came together,” Tito Puente Junior told Okayafrica after concert. “I want the people who came here tonight and the people around the world to remember who Tito Puente Santa Cruz was. And thank everybody to remember Tito Puente, It’s been 16 years that my father passed away, but tonight we celebrate his life”.

Puente Sr. was raised in New York City’s Spanish Harlem, and he is often credited as “The Latin Jazz Music Pope.” Puente played popular Afro-Cuban rhythms, bringing together Afro-Cuban and Caribbean sounds. Puente youngest son, Tito Puente Jr has continued his father’s legacy by presenting many of same songs in his performances and recordings.

American jazz and salsa musician and band leader Tito Puente (1923 – 2000) (left) performs with Cuban-American salsa performer Celia Cruz (1925 – 2003) during their Jazz at Lincoln Center concert at Alice Tully Hall, New York, New York, December 12, 1992. (Photo by Jack Vartoogian/Getty Images)
East Harlem
UPPER MANHATTAN, NEW YORK CITY, NY
East Harlem, also colloquially known as El Barrio and previously as Spanish Harlem, is a neighborhood of Upper Manhattan, New York City roughly encompassing the area north of the Upper East Side and East 96th Street up to about the 140s, east of Fifth Avenue to the East and Harlem Rivers. It lies within Manhattan Community District 11. Despite its name, it is generally not considered to be a part of Harlem.


The neighborhood is one of the largest predominantly Latino communities in New York City, mostly made up of Puerto Ricans, as well as increasing numbers of Dominican, Salvadoran and Mexican immigrants. It includes the area formerly known as Italian Harlem, in which the remnants of a once predominantly Italian community remain. The Chinese population has increased dramatically in East Harlem since 2000.

East Harlem has historically suffered from many social issues, such as the highest jobless rate in New York City, teenage pregnancy, AIDS, drug abuse, homelessness, and an asthma rate five times the national average. It has the second highest concentration of public housing in the United States, closely following Brownsville, Brooklyn.[10] Police services to the neighborhood are divided between the 23rd and the 25th Precincts. Conversely, East Harlem is notable for its contributions to Latin freestyle and salsa music.