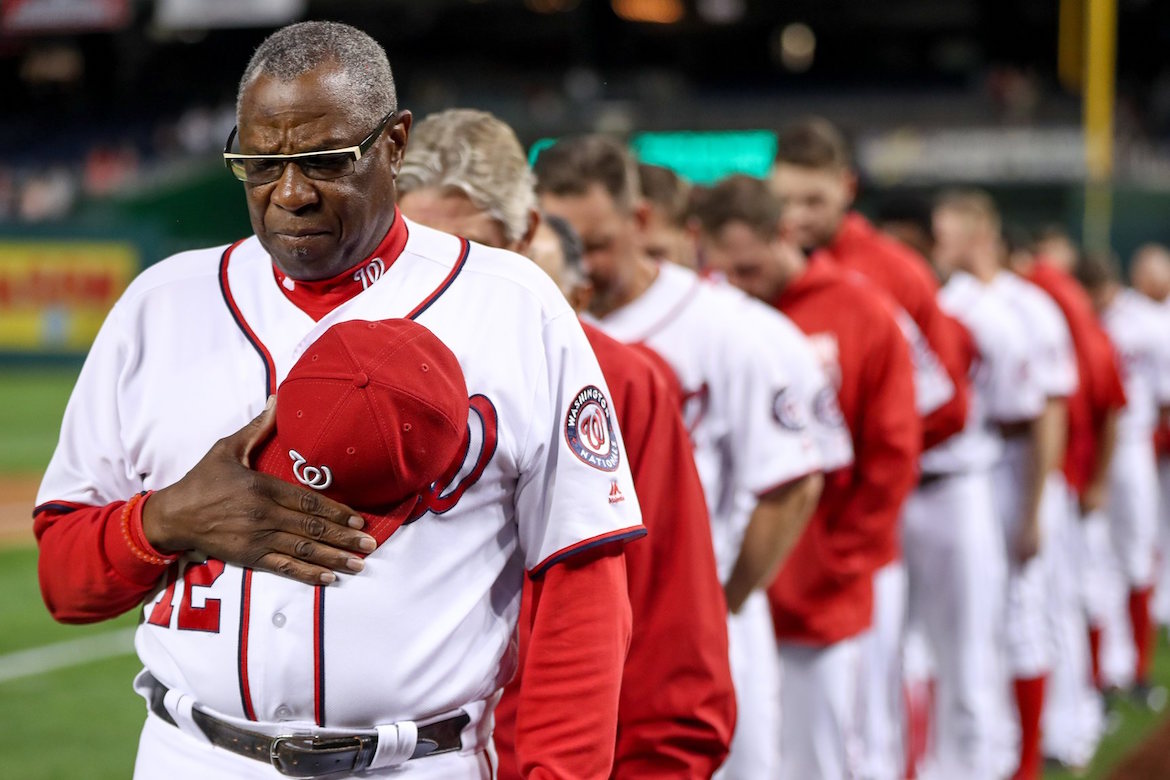 BY   Les Carpenter    PUB   The Guardian [perfectpullquote align=”full” cite=”” link=”” color=”” class=”” size=”14″] When the Nats play the Dodgers on Friday, Dusty Baker and Dave Roberts will become the first black managers to oppose each other in a postseason series. Baseball has no choice but to pay attention[/perfectpullquote]
Late last fall, the Washington Nationals and Los Angeles Dodgers had seemingly settled on two white men to manage their teams. This wasn’t much a surprise. Despite league rules that demand clubs interview non-white candidates for their manager and general manager jobs, baseball teams almost never hire candidates of color. Owners and executives tend to hire people like themselves, and since most of the decision-makers are white, the people they put in charge of their teams are, too.

Washington offered their manager’s job to former Padres manager Bud Black, who accepted it and immediately began negotiating a contract. Los Angeles went into their search with an apparent favoritism for Gabe Kapler, who had once played for team president Andrew Friedman in Tampa Bay. Each was seen as a smart choice; Black the bright tactician who had been in charge of a bad team in San Diego, and Kapler versed in the contemporary ways of baseball thinking.

Los Angeles Dodgers manager Dave Roberts celebrates with fans following the victory against the Colorado Rockies that clinched the National League West title. Photograph: Gary A. Vasquez/USA Today Sports
Washington Nationals
U.S. PROFESSIONAL BASEBALL TEAM
The Washington Nationals are a professional baseball team based in Washington, D.C. The Nationals compete in Major League Baseball (MLB) as a member club of the National League (NL) East division. From 2005 to 2007, the team played in RFK Stadium; since 2008 their home stadium has been Nationals Park on South Capitol Street in Southeast D.C., near the Anacostia River.


As the Major League Baseball team in the U.S. capital, the Nationals are the successors to the original Washington Nationals, renamed Senators in 1956 (both “Nats” for short). A Washington Senators team — one from 1891 to 1899 played in the early National League, the American League Nationals from 1901 to 1960 (becoming the Senators in 1956) then moving to Minnesota to become the Minnesota Twins. The expansion Senators existed from 1961 to 1971 then moved to Arlington as the Texas Rangers.