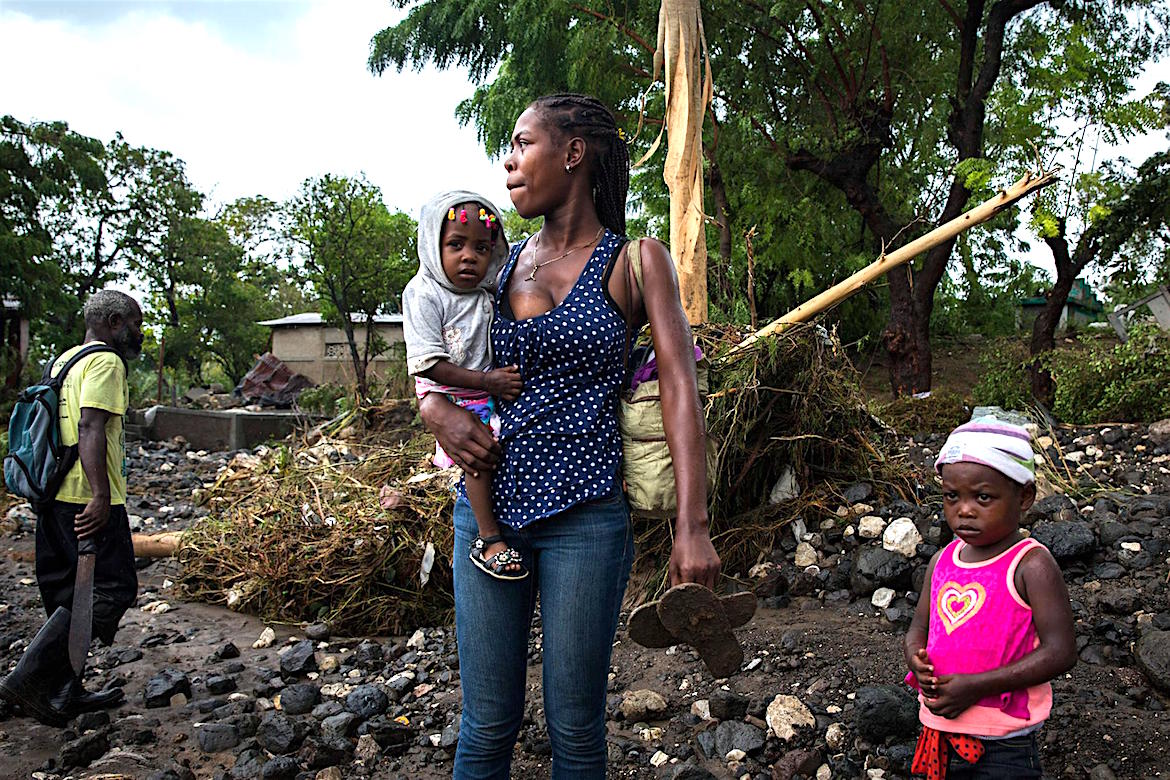 What is already evident, however, is that the Category 4 hurricane, which struck Haiti on October 4, has leveled another blow of destruction on an island nation still reeling from the 2010 earthquake and a subsequent cholera crisis.

“Haiti was already struggling, so it doesn’t have a lot of capacity to respond to the hurricane,” says Andrew McConnell, a photojournalist who is on the scene. “Yet it may take the brunt of it.”

Haitian officials have reported more than one hundred deaths so far, yet little information has emerged from the southern department of Grand-Anse, near the point where Matthew made landfall. Communications in Grand-Anse have been knocked out, and roads in the area remain impassible, according to the Associated Press.

Residents in the Haitian coastal commune of Leogane, 18 miles west of Port-au-Prince, survey homes damaged by fallen trees after Hurricane Matthew swept through the area. PHOTOGRAPH BY ANDREW MCCONNELL, PANOS FOR NATIONAL GEOGRAPHIC

The bridge over the La Digue River served as a critical connection between the capital and the worst-hit southwestern peninsula of the island. It collapsed during the Category-4 hurricane. PHOTOGRAPH BY ANDREW MCCONNELL, PANOS FOR NATIONAL GEOGRAPHIC

Hatians negotiate the damage left behind by Hurricane Matthew, making their way across the La Digue River after a critical bridge collapsed in the storm. PHOTOGRAPH BY ANDREW MCCONNELL, PANOS FOR NATIONAL GEOGRAPHIC

Lumis Sayafey, 60, stands in front of her flooded home in Leogane, 18 miles west of Port-au-Prince. Compared to the destruction in the southern part of the country, the area around the capital escaped major damage. PHOTOGRAPH BY ANDREW MCCONNELL, PANOS FOR NATIONAL GEOGRAPHIC

With the bridge gone, residents of Petit Goave attempt to ford the La Digue River. Emergency responders are still unable to reach Haiti’s stricken southwestern peninsula. PHOTOGRAPH BY ANDREW MCCONNELL, PANOS FOR NATIONAL GEOGRAPHIC
Haiti
OFFICIALLY THE REPUBLIC OF HAITI
Haiti; Haitian Creole: Ayiti [ajiti]), officially the Republic of Haiti (French: République d’Haïti; Haitian Creole: Repiblik Ayiti), is a sovereign state in the Western Hemisphere (North America). The country is located on the island of Hispaniola, in the Greater Antilles archipelago of the Caribbean. It occupies the western three-eighths of the island, which it shares with the Dominican Republic. Haiti is 27,750 square kilometres (10,714 sq mi) in size and has an estimated 10.6 million people, making it the most populous country in the Caribbean Community (CARICOM) and the second-most populous country in the Caribbean as a whole.
See Also