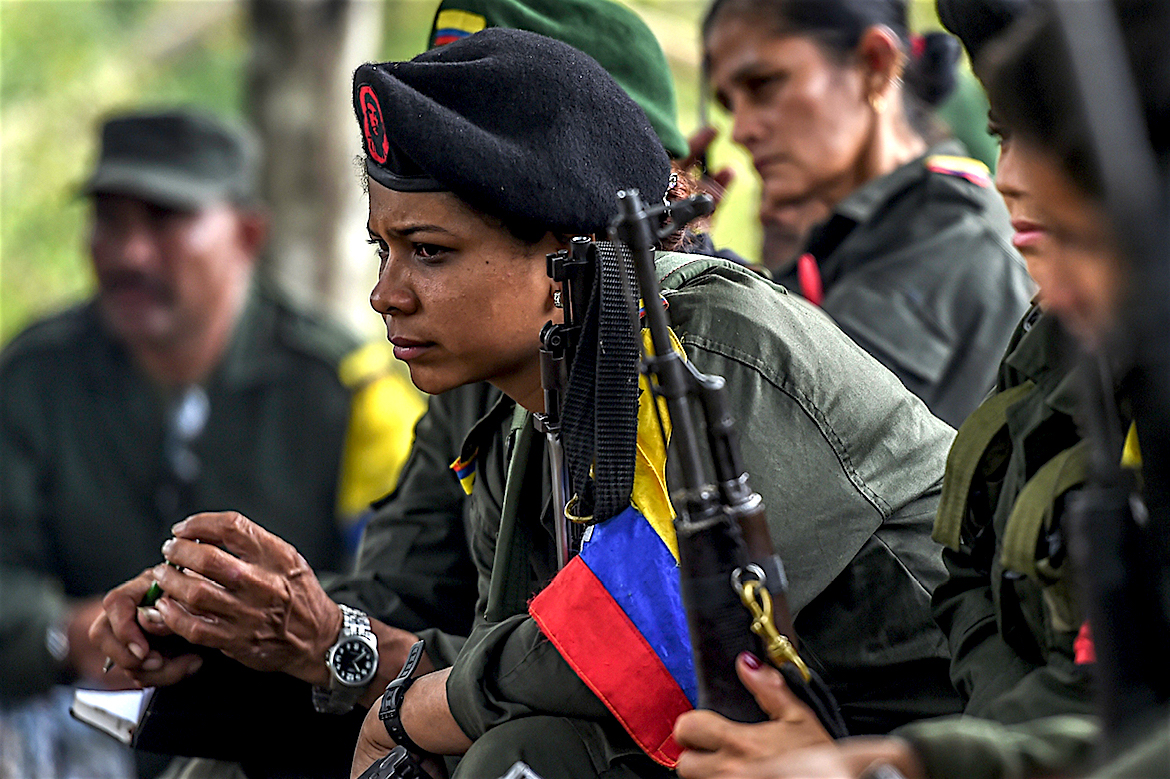 BY   Megan Alpert
PUB   The Atlantic [/two_fifth][three_fifth_last padding=”0 0px 0 10px”][perfectpullquote align=”full” cite=”” link=”” color=”” class=”” size=”16″]The country’s historic peace deal means thousands of female fighters are giving up their weapons. But what happens then?[/perfectpullquote]
From her perch at the top of a hill at a school for at-risk youth in Bogotá, a 17-year-old girl wearing a white track suit, her hair pulled into a ponytail, could see the city stretch before her. Her straight back and easy assertiveness were the only signs that, just six months earlier, she was roaming the jungle with the Popular Liberation Army (EPL), a communist guerrilla group that formed in the late 1960s with the aim of overthrowing the Colombian government. The group formally demobilized in 1991, but since then, dissident factions have continued to fight and finance themselves via drug trafficking. Nowadays, the group’s ranks have dwindled to around 100 fighters, down from 3,000 at its peak in the 1970s, but it still holds sway in some rural areas of Colombia where the state is largely absent.

When I visited the young woman at her school this April, she told me she fled her home in Norte de Santander in 2015 to join the EPL to escape her family. Her stepfather began sexually abusing her when she was 12, and when her mother found out four years later, she turned her anger on her daughter. She joined the group at 16, she said, not to achieve some ideological goal, but to “unburden [her] mind.” In only two months in the jungle, she learned how to carry a 50-pound pack and a rifle, and barely escaped being pummeled by an improvised mortar that landed next to her during a firefight.

She is one of thousands of women who have fought in leftist guerrilla groups during more than half a century of war in Colombia. Groups like the EPL, the National Liberation Army (ELN), and, most notably, the Revolutionary Armed Forces of Colombia (FARC) took up arms to fight against land and wealth inequality, but wound up turning to illegal activities like kidnapping and drug trafficking to finance their operations. On September 26, after four years of negotiations, the largest rebel group, the FARC, signed a peace treaty with the Colombian government. This means that, soon, an additional 7,500 combatants, including about 3,000 women, will demobilize en masse.

[two_fifth padding=”0 25px 0 10px”]Revolutionary Armed Forces of Colombia—People’s Army
FUERZAS ARMADAS REVOLUCIONARIAS DE COLOMBIA—EJERCITO DEL PUEBLO, FARC–EP and FARC[/two_fifth][three_fifth_last padding=”0 0px 0 10px”]FARC is a guerrilla movement involved in the continuing Colombian armed conflict since 1964. It has been known to employ a variety of military tactics in addition to more unconventional methods, including terrorism. The FARC-EP, which formed during the Cold War period as a Marxist-Leninist peasant force, promotes a political line of agrarianism and anti-imperialism. The operations of the FARC–EP were funded by kidnap and ransom; illegal mining; extortion and/or taxation of various forms of economic activity; and the taxation, production, and distribution of illegal drugs. The United Nations has estimated that 12% of all killings of civilians in Colombian conflict have been committed by FARC and ELN guerrillas, and the rest, 88%, by government forces and paramilitaries.


The strength of the FARC–EP forces is indeterminate; in 2007, the FARC said they were an armed force of 18,000 men and women; in 2010, the Colombian military calculated that FARC forces consisted of approximately 13,800 members, 50 percent of whom were armed guerrilla combatants; and, in 2011, the President of Colombia, Juan Manuel Santos, said that FARC–EP forces comprised fewer than 10,000 members. In 2013 it was reported that 26,648 FARC and ELN members had decided to demobilize since 2002. According to a report from Human Rights Watch, approximately 20–30% of the recruits are minors, most of whom are forced to join the FARC. The greatest concentrations of FARC forces are in the southeastern, northern and southwestern regions of Colombia’s 500,000 square kilometers (190,000 sq mi) of jungle, in the plains at the base of the Andean mountain chain and in northwestern Colombia. However, the FARC and the ELN (National Liberation Army of Colombia) lost control of much of the territory, especially in urban areas, forcing them to relocate to remote areas in the jungle and the mountains

In 1964, the FARC–EP were established as the military wing of the Colombian Communist Party (Partido Comunista Colombiano, PCC), after the Colombian military attacked rural communist enclaves in the aftermath of The Violence (La Violencia, ca. 1948–58). The FARC are a violent non-state actor (VNSA) whose formal recognition as legitimate belligerent forces is disputed by some organizations. As such, the FARC has been classified as a terrorist organization by the governments of Colombia, the United States, Canada, Chile, New Zealand, and the European Union; whereas the governments of Venezuela, Brazil, Argentina, Ecuador, and Nicaragua do not. In 2008, Venezuelan President Hugo Chávez recognized the FARC–EP as a proper army. President Chávez also asked the Colombian government and their allies to recognize the FARC as a belligerent force, arguing that such political recognition would oblige the FARC to forgo kidnapping and terrorism as methods of civil war and to abide by the Geneva Convention. Juan Manuel Santos, the current President of Colombia, has followed a middle path by recognizing in 2011 that there is an “armed conflict” in Colombia although his predecessor, Alvaro Uribe, strongly disagreed. In 2012, FARC announced they would no longer participate in kidnappings for ransom and released the last ten soldiers and police officers they kept as prisoners, but it has kept silent about the status of hundreds of civilians still reported as hostages, and continued kidnapping soldiers and civilians. In February 2008, millions of Colombians demonstrated against the FARC.

In 2012, the FARC made 239 attacks on the energy infrastructure. However, the FARC have shown signs of fatigue. As of 2014, the FARC are not seeking to engage in outright combat with the army, instead concentrating on small-scale ambushes against isolated army units. Meanwhile, since 2008, the FARC have opted to attack police patrols with home-made mortars, sniper rifles, and explosives, as they are not considered strong enough to engage police units directly. This follows the trend of the 1990s during the strengthening of Colombian government forces.

In June 2016, the FARC signed a ceasefire accord with the President of Colombia, Juan Manuel Santos in Havana. Although a final peace agreement will require a referendum, this accord has been seen as a historic step to ending the war that has gone on for fifty years.

In August 25, 2016, the Colombian president, Juan Manuel Santos, announced that four years of negotiation has secured a peace deal with FARC and that a national referendum would take place on 2 October.