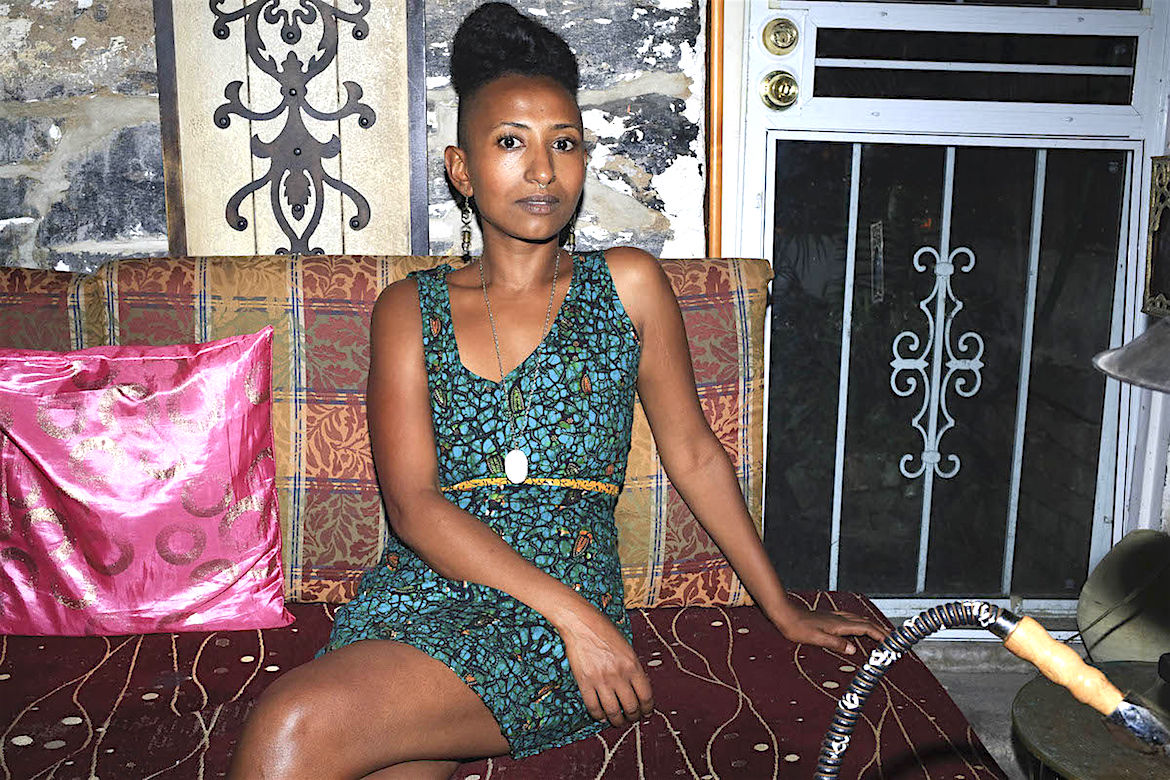 On Being a Black Female Math Whiz During the Space Race

BY   Omnia Saed PHOTO   Camilo Fuentealba
PUB   Okay Africa [/two_fifth][three_fifth_last padding=”0 0px 0 10px”][perfectpullquote align=”full” cite=”” link=”” color=”” class=”” size=”16″]Alsarah, Oddisee, Sinkane and Mo Kheir (of No Wyld)are some of the best musicians working and living in New York City. They’re also all Sudanese. We got them together for an in-depth conversation about home and identity.[/perfectpullquote]
Ahmed Gallab, better known as Sinkane, fans himself from the heat. The walk to the hookah lounge clearly got the best of him.

“We didn’t have an industry to follow, even a skeleton of one,” says Gallab about his generation of Sudanese artists.

“I’m going to stop you,” Alsarah quickly replies. Having gotten to the restaurant much earlier, she sits poised in her seat, not a gleam of sweat in sight and her hand firmly around a glass of wine.

“There are a lot of Sudanese actors and musicians that have been around. We don’t know about them because of Sudan’s history. In 1981 Nimeiry’s regime actually burned all the archives of Sudanese television.”

She pauses for a bit to think of her next words. It’s the role she’s accustomed to play in a circle of men. The fact checker, the educator and often times the rebuttal, she leans forward and looks at Ahmed directly.

“There’s Aisha Al-Falatiya. It was a big problem for a woman to be a singer at the time, especially because she was coming from a less socioeconomically [advantageous] space, a.k.a. an ethnically different space, which we need to address in the Sudanese community. All these ethnic differences between us that we don’t advocate for influence who’s about to be a public figure and who’s not. There’s been a lot of actors and actresses, but to come from awlad al-3rab (Arab origins) is different then from somewhere else, and it’s important to acknowledge that.”

“Right, right,” concedes Ahmed. “What I’m saying is that they haven’t had a serious opportunity because of the history of Sudan for our generation. One of the things that keeps me going is that I have this opportunity. We all have this opportunity, to make a really big difference to show who we are, to be role models to people and to piggy-back on a lot of the great artists and the great entertainers who didn’t have that opportunity. I think it’s really important to show people that there is a voice for Sudanese people all around the world.”

We met at the La Sultana, a hookah lounge in New York City’s East Village. Finding a Sudanese restaurant in New York proved to be an insurmountable challenge, shisha though, was an agreeable alternative.

Sitting in a chair, scrolling on her phone, Alsarah was seated, legs crossed, 15 minutes early. She was clad in a blue dress, earring dangling from her lobes and an impeccable coif (the type that looks like it would take hours of training to get done, but for her maybe none) her gleaming septum ring greeted me before I reached out my hand. When I did, she smiled.

“I was always a wild kid, and that has always been a source of great strife in my life,” she spoke to me. “I’m close to my Sudanese family, but that closeness is not without a price, you know. My relationship with Sudan is not easy, but the music for me has always been a way to make it easy and make it so that I get to be Sudanese.”

Alsarah. Photography by Camilo Fuentealba.
[two_fifth padding=”0 25px 0 10px”]Sudan
OFFICIALLY, REPUBLIC OF THE SUDAN[/two_fifth][three_fifth_last padding=”0 0px 0 10px”]Sudan is a country in northeastern Africa. It is bordered by Egypt to the north, the Red Sea, Eritrea, and Ethiopia to the east, South Sudan to the south, the Central African Republic to the southwest, Chad to the west and Libya to the northwest. It is the third largest country in Africa. The River Nile divides the country into eastern and western halves. Its predominant religion is Islam.


Sudan was home to numerous ancient civilizations, such as the Kingdom of Kush, Kerma, Nobatia, Alodia, Makuria, Meroë and others, most of which flourished along the Nile. During the pre-dynastic period Nubia and Nagadan Upper Egypt were identical, simultaneously evolved systems of pharaonic kingship by 3300 BC. By virtue of its proximity to Egypt, the Sudan participated in the wider history of the Near East inasmuch as it was Christianized by the 6th century, and Islamized in the 15th.

Sudan is a member of the United Nations, the African Union, the Arab League, the Organisation of Islamic Cooperation and the Non-Aligned Movement, as well as an observer in the World Trade Organization.[14][18] Its capital is Khartoum, the political, cultural and commercial centre of the nation. It is a presidential representative democratic federal republic. The politics of Sudan is regulated by a parliamentary organization called the National Assembly. The Sudanese legal system is based on Islamic law.