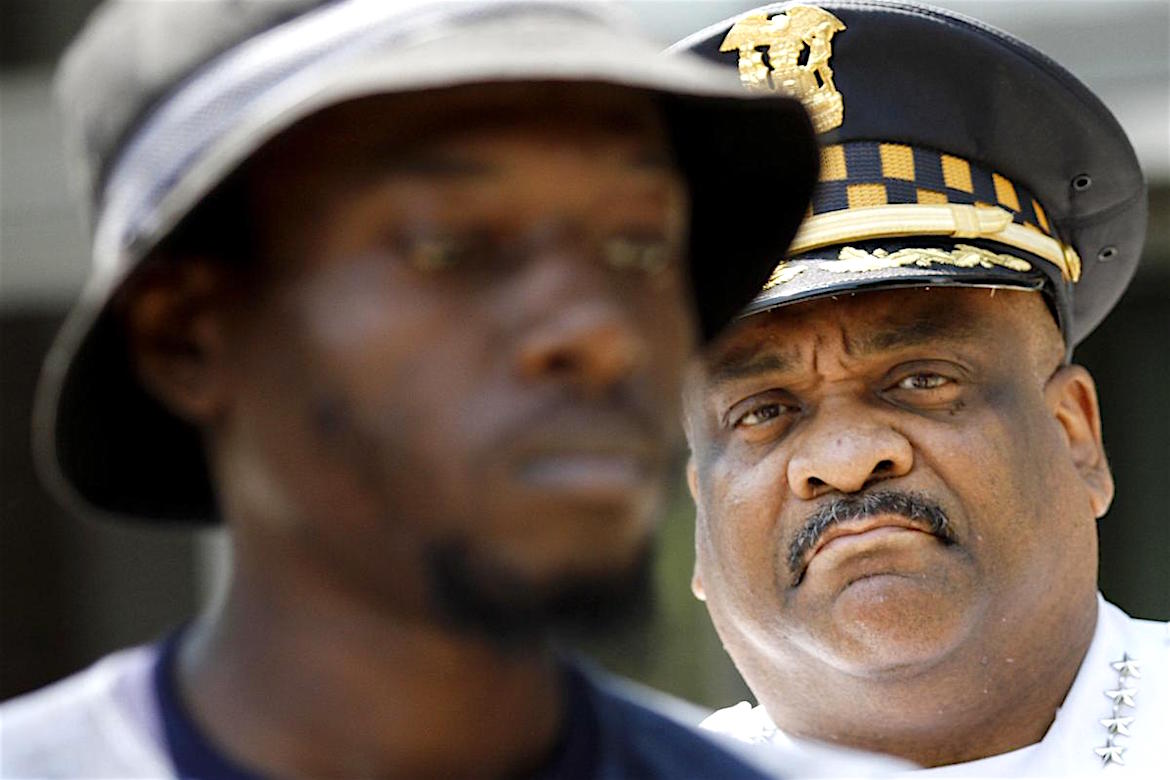 Police Superintendent Eddie Johnson, announcing the hires Wednesday evening, said the department is trying to earn the community’s trust back. But that won’t happen overnight. He added:[perfectpullquote align=”full” cite=”” link=”” color=”” class=”” size=”16″]The violence in Chicago is not a police-driven problem, and it’s not just for the police to resolve. We need the police, the community, elected officials, clergy—everybody has a vested interest in resolving the crime issue in Chicago.[/perfectpullquote]

Last month, Chicago had 90 homicides, the highest monthly total in two decades. The city has had 500 homicides this year—higher than all of 2015, and is on pace to break 600. The police force has 12,000 officers and the addition of nearly 1,000 more would be the greatest police-hiring surge since the 1980s.

The Chicago Sun Times has a breakdown of how quickly new recruits are expected, as well as their cost:

Chicago Police Superintendent Eddie Johnson, right, is blocked by one of three protestors as he tries to deliver a written statement about the recent release of police shooting video to television reporters outside the police department headquarters Friday, Aug. 5, 2016, in Chicago. (AP Photo/Tae-Gyun Kim)
[two_fifth padding=”0 25px 0 10px”]Chicago Police Department
PRINCIPAL LAW ENFORCEMENT AGENCY, CITY OF CHICAGO, IL[/two_fifth][three_fifth_last padding=”0 0px 0 10px”]It is the second largest non-federal law enforcement agency in the United States behind the New York City Police Department. It has about 12,244 sworn officers and over 1,925 other employees. Tracing its roots back to 1835, the Chicago Police Department is one of the oldest modern police forces in the world.

Mayor Rahm Emanuel appointed Garry F. McCarthy, former director of the Newark, New Jersey, Police Department, as superintendent; this was approved by the city council on June 8, 2011. McCarthy was the highest paid city employee with an annual salary of $260,004. Prior to McCarthy’s appointment, Jody P. Weis was sworn in as superintendent of police on February 1, 2008. At the time, Weis was the second Chicago police superintendent hired from outside of the city. He replaced Philip J. Cline, who officially retired on August 3, 2007. Weis’ contract expired on March 1, 2011. Mayor Richard M. Daley appointed Cline’s predecessor, Terry Hillard, on an interim basis. McCarthy was forced to resign at the request of Mayor Emanuel on December 1, 2015 over the city’s high murder rate and his department’s handling of the shooting of Laquan McDonald. The mayor appointed former Bureau of Patrol Chief Eddie Johnson as Superintendent on 28 March 2016.