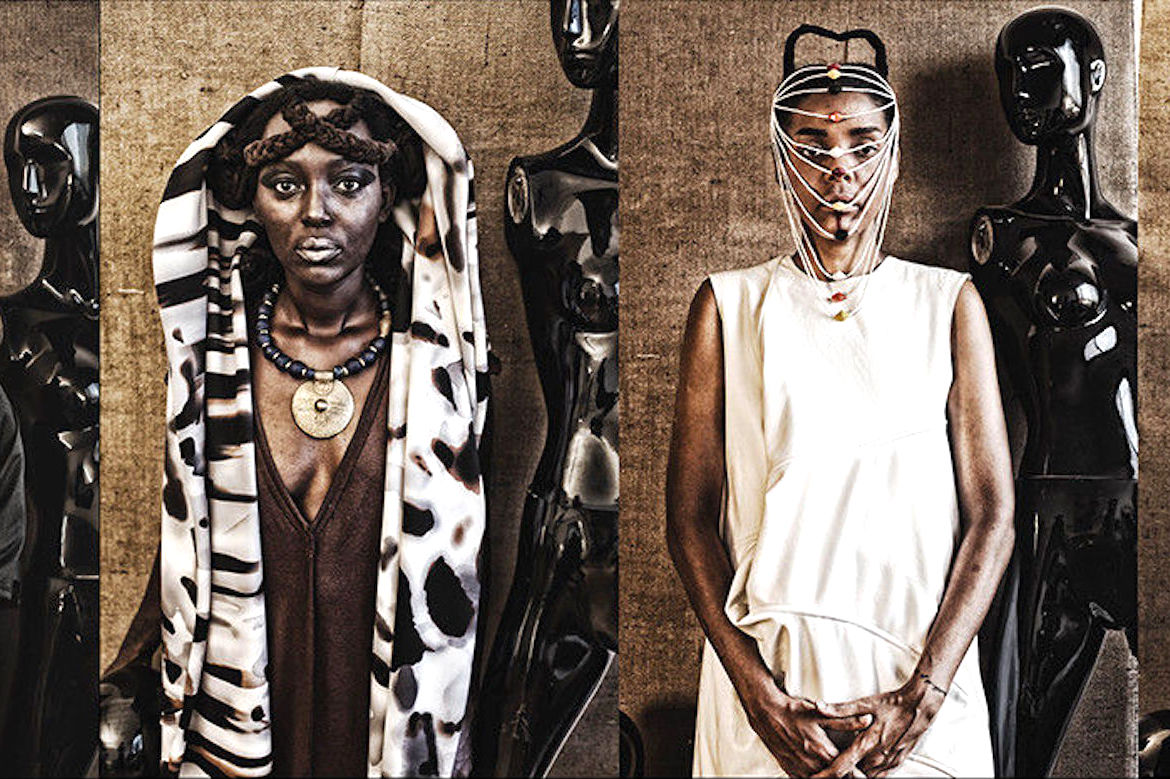 BY   Erin C.J. Robertson
PUB   Okay Africa [/two_fifth][three_fifth_last padding=”0 0px 0 10px”][perfectpullquote align=”full” cite=”” link=”” color=”” class=”” size=”16″]Outside a TV monitor plays a tutorial on how to survive a white supremacist hairstyle.[/perfectpullquote]
Passing through a cascading beaded curtain, you’re greeted by a full set of sprays—aloe and other oils—and three comfortable chairs. A projection on the wall shows a loop of traditional and contemporary Afro-textured hairstyles, including a Mohawk dating back to the 1950s.

Welcome to The Salooni Project, a conceptual art installation, created by Ugandan friends Kampire Bahana, a writer-organizer; Darlyne Komukama, a photographer; Aida Mbowa, a theater buff; and Gloria Wavamunno, a fashion designer. Together, they’ve taken their pop-up salon experience on the road to festivals like LaBa! Arts Festival in Kampala and Chale Wote Art Festival in Accra.

“It is an attempt to imagine a space and a future in which Black hair issues are elevated to a culture and a science, a site of knowledge,” Kampire explains over Skype. “But it is not as fraught and painful a subject and an experience for Black women.”

Beyond recreating the familiar, communal Black salon—or “salooni” as it’s called in Uganda—experience (or what’s become a ritual for many Black women), the project invites patrons to sit down for a free massage, hair play or in some cases, a big chop. Your experience varies depending on which chair you choose. It’s a “gesture of care for the public in a non-judgmental and anonymous way,” Aida tells Okayafrica.

Through exhaustive research culled from video tutorials, Black beauty and hair Instagrams and Tumblr pages, photography by J.D. ‘Okhai Ojeikere and Shani Crowe (a strong muse), and books and articles such as “Black Hairstyle Politics” by Kobena Mercer, the creators have aimed to elevate Black women’s knowledge of hair practices and rituals of care—like memories of sitting between your loved one’s legs as she molds your hair into Bantu knots or oils your scalp before bed—while guiding festival-goers to a safe space where they can “really reckon with what [their] hair looks like when it grows out of [their] head,” Aida posits. “I think this a powerful move forward for so many of us.”

These photos are part of Salooni, a mulit-disciplinary experiential art project created by four female Ugandan artists; Kampire Bahana, Darlyne Komukama, Aida Mbowa and Gloria Wavamunno. Photography: Darlyne Komukama.
[two_fifth padding=”0 25px 0 10px”]Uganda
OFFICIALLY, REPUBLIC OF UGANDA[/two_fifth][three_fifth_last padding=”0 0px 0 10px”]Uganda, officially the Republic of Uganda, is a landlocked country in East Africa. It is bordered to the east by Kenya, to the north by South Sudan, to the west by the Democratic Republic of the Congo, to the southwest by Rwanda, and to the south by Tanzania. Uganda is the world’s second most populous landlocked country after Ethiopia. The southern part of the country includes a substantial portion of Lake Victoria, shared with Kenya and Tanzania. Uganda is in the African Great Lakes region. Uganda also lies within the Nile basin, and has a varied but generally a modified equatorial climate.


Uganda takes its name from the Buganda kingdom, which encompasses a large portion of the south of the country, including the capital Kampala. The people of Uganda were hunter-gatherers until 1,700 to 2,300 years ago, when Bantu-speaking populations migrated to the southern parts of the country.

Beginning in 1894, the area was ruled as a protectorate by the British, who established administrative law across the territory. Uganda gained independence from Britain on 9 October 1962. The period since then has been marked by intermittent conflicts, including a lengthy civil war against the Lord’s Resistance Army, which has caused tens of thousands of casualties and displaced more than a million people.

The official language is English. Luganda, a central language, is widely spoken across the country, and several other languages are also spoken including Runyoro, Runyankole, Rukiga, and Lango. The president of Uganda is Yoweri Museveni, who came to power in January 1986 after a protracted six-year guerrilla war.