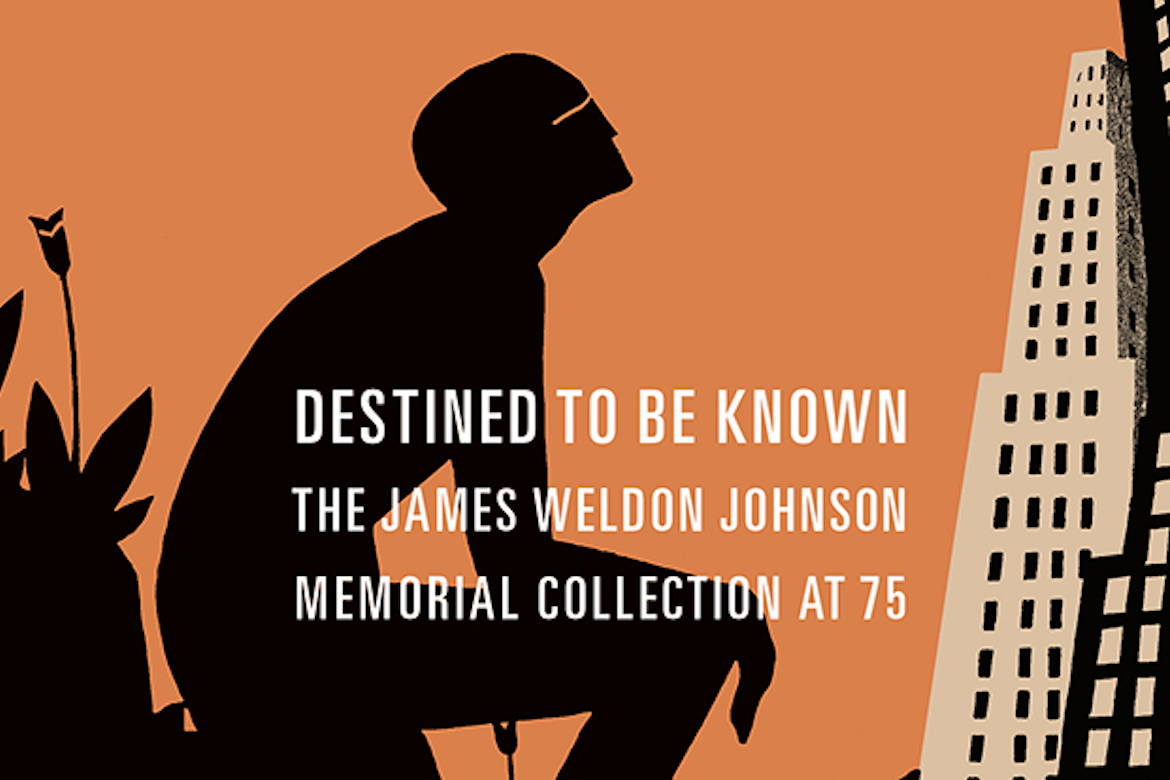 BY   Yale News
PUB   Yale News [/two_fifth][three_fifth_last padding=”0 0px 0 10px”][perfectpullquote align=”full” cite=”” link=”” color=”” class=”” size=”16″]African American literary and artistic achievements are showcased in a new exhibition, “Destined to Be Known: The James Weldon Johnson Memorial Collection at 75,” at the Beinecke Rare Book & Manuscript Library The exhibition runs Sept. 23–Dec. 10 in the library, 121 Wall St. It is free and open to the public.[/perfectpullquote]
Passing through a cascading beaded curtain, you’re greeted by a full set of sprays—aloe and other oils—and three comfortable chairs. A projection on the wall shows a loop of traditional and contemporary Afro-textured hairstyles, including a Mohawk dating back to the 1950s.

The exhibition marks the anniversary of the James Weldon Johnson (JWJ) Memorial Collection, founded in 1941 by Carl Van Vechten both as a memorial to Johnson, an architect of the Harlem Renaissance, and as a celebration of the broad accomplishments of African American writers and artists over time. Today, the JWJ Collection is a key archive of African American history and culture.

“The JWJ collection is one of the premier collections of its kind anywhere in the world, and one of the most actively consulted of Yale’s extensive collections,” says Nancy Kuhl, curator of poetry in the
Yale Collection of American Literature (YCAL) and a co-organizer of the exhibition. “Scholars have used it for more than half a century to document, discover, and disseminate important aspects of national and global culture and to create new scholarship to educate present and future generations. We are especially delighted by how frequently the collection is used for classroom teaching and learning and for research by Yale faculty and students.”

When Johnson was killed in a car accident in 1938, just weeks after his 67th birthday, there was tremendous demand for a memorial to his memory. Though plans were made for a statue in Manhattan, the memorial committee, under the leadership of Johnson’s friend Van Vechten, decided instead to found a collection of African American arts and letters at Yale in his honor.

The JWJ Collection also contains extensive visual material. Van Vechten photographed hundreds of his friends including all the persons mentioned above as well as Alvin Ailey, Marian Anderson, Pearl Bailey, Josephine Baker, Ella Fitzgerald, Billie Holiday, Eartha Kitt, Arthur Mitchell, Paul Robeson, Margaret Walker, and Ethel Waters, among many others. These photographs, together with those collected by Hughes and Wright, comprise an important visual record of artists, writers, actors, musicians, and politicians active in the United States from the 1920s through the 1950s.

Sculpture by Richmond Barthé, Augusta Savage, and Leslie Bolling; drawings by Mary Bell; a portrait head of Ethel Waters by Antonio Salemme, as well as commemorative medals and prints are among the many works of art in the collection. The Randolph Linsly Simpson Collection, acquired in the 1990s, of photographs of and by African Americans contains nearly 3,000 photographs of African Americans and spans the history of photography, from daguerreotypes and cabinet cards to photographic postcards and snapshots.

Born on June 17, 1871, in Jacksonville, Florida, James Weldon Johnson was a civil rights activist, writer, composer, politician, educator and lawyer, as well as one of the leading figures in the creation and development of the Harlem Renaissance. After graduating from Atlanta University, Johnson worked as a principal in a grammar school, founded a newspaper, The Daily American, and became the first African American to pass the Florida Bar. His published works include The Autobiography of an Ex-Colored Man (1912) and God’s Trombones (1927). Johnson died on June 26, 1938, in Wiscasset, Maine.

Beginning in 1894, the area was ruled as a protectorate by the British, who established administrative law across the territory. Uganda gained independence from Britain on 9 October 1962. The period since then has been marked by intermittent conflicts, including a lengthy civil war against the Lord’s Resistance Army, which has caused tens of thousands of casualties and displaced more than a million people.

The official language is English. Luganda, a central language, is widely spoken across the country, and several other languages are also spoken including Runyoro, Runyankole, Rukiga, and Lango. The president of Uganda is Yoweri Museveni, who came to power in January 1986 after a protracted six-year guerrilla war.