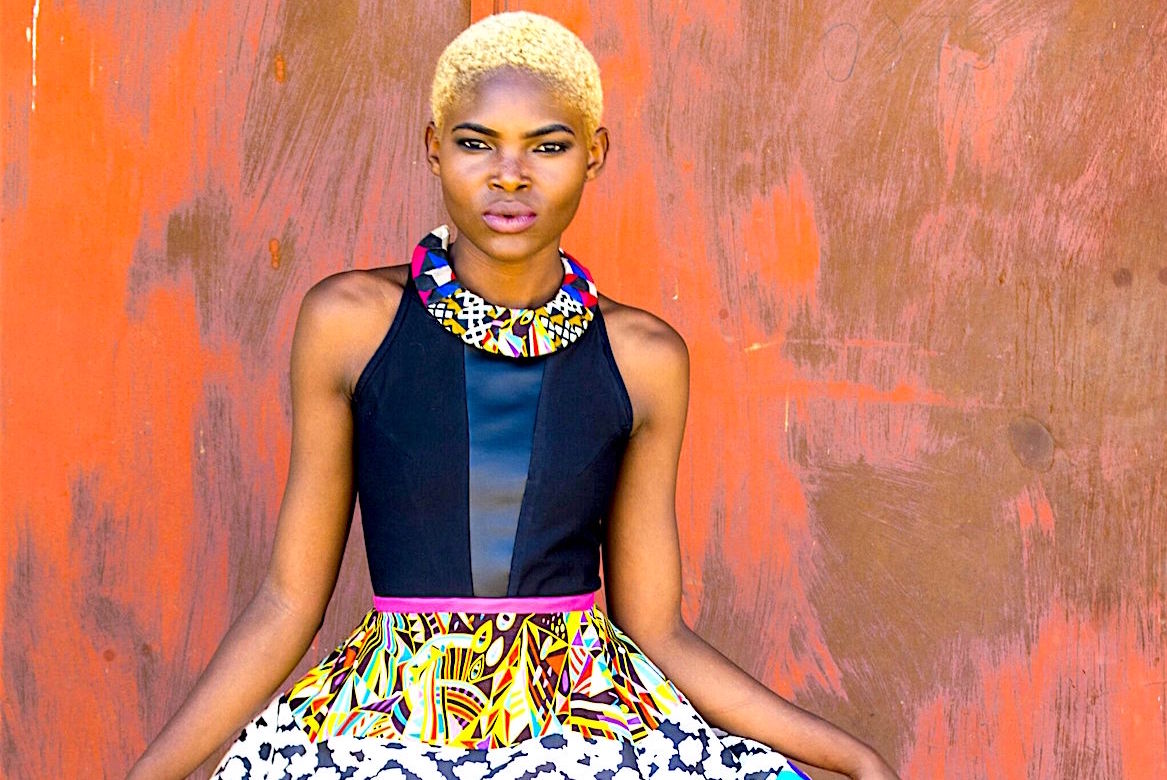 BY   Mazuba Kapambwe
PUB   Okay Africa [/two_fifth][three_fifth_last padding=”0 0px 0 10px”][perfectpullquote align=”full” cite=”” link=”” color=”” class=”” size=”16″]A decade ago, Zambia’s textile and clothing industry had all but withered into the dust as privatization sapped the vigor of the industry and reduced the Zambian public to consuming cheap Chinese goods. However, the last few years have seen a resurgence in the fashion industry with more young designers bursting on the scene.[/perfectpullquote]
The annual Zambia Fashion Week offers a platform for local emerging and established designers to showcase their designs to potential clients and buyers. There’s also a Zambia Fashion Council, founded in 2014, whose mission is to develop a thriving and profitable fashion industry in Zambia.

With Zambian designers being invited to showcase their collections at fashion weeks around the world and bloggers increasingly working with major brands, the Zambian fashion scene is set to take off. Here, we take a look at five labels and designers that are shaking up the Zambian fashion industry.

Mangishi Love by Kapasa Musonda
A graduate of the Fashion Institute of Design and Merchandising (FIDM) in Los Angeles, Zambian designer Kapasa Musonda established her Mangishi brand in 2012. She’s since gone on to showcase collections in L.A, Palm Springs, Atlanta, Adelaide and Lusaka.

The ready-to-wear pieces in her Mangishi Doll line consist of unique prints and bold colors mixed in unusual yet rhythmic ways. The word mangishi is derived from the Nyanja language, referring to a piece of wire twisted into an artistic craft.

ChizO Designs by Chisoma Lombe
Chisoma Lombe is the founder and owner of ChizO Designs, which has been operational since 2013. Lombe made her Zambia Fashion Week in 2014. She’s since gone on to showcase at Zimbabwe Fashion Week and will soon show at Accra Fashion Week in October 2016. Her designs feature colorful embroidery, which she says is because she likes to make bright, bold and unique outfits that channel “the beauty of nature.”

Courtesy of ChizO Designs by Chisoma Lombe.
[two_fifth padding=”0 25px 0 10px”]Zambia
OFFICIALLY, REPUBLIC OF ZAMBIA[/two_fifth][three_fifth_last padding=”0 0px 0 10px”]The Republic of Zambia is a landlocked country in Southern Africa, neighbouring the Democratic Republic of the Congo to the north, Tanzania to the north-east, Malawi to the east, Mozambique, Zimbabwe, Botswana and Namibia to the south, and Angola to the west. The capital city is Lusaka, in the south-central part of Zambia. The population is concentrated mainly around Lusaka in the south and the Copperbelt Province to the northwest, the core economic hubs of the country.
See Also

Originally inhabited by Khoisan peoples, the region was affected by the Bantu expansion of the thirteenth century. After visits by European explorers in the eighteenth century, Zambia became the British protectorate of Northern Rhodesia towards the end of the nineteenth century. For most of the colonial period, Zambia was governed by an administration appointed from London with the advice of the British South Africa Company.

On 24 October 1964, Zambia became independent of the United Kingdom and prime minister Kenneth Kaunda became the inaugural president. Kaunda’s socialist United National Independence Party (UNIP) maintained power from 1964 until 1991. Kaunda played a key role in regional diplomacy, cooperating closely with the United States in search of solutions to conflicts in Rhodesia (Zimbabwe), Angola, and Namibia. From 1972 to 1991 Zambia was a one-party state with the UNIP as the sole legal political party under the motto “One Zambia, One Nation”. Kaunda was succeeded by Frederick Chiluba of the social-democratic Movement for Multi-Party Democracy in 1991, beginning a period of social-economic growth and government decentralisation. Levy Mwanawasa, Chiluba’s chosen successor, presided over Zambia from January 2002 until his death in August 2008, and is credited with campaigns to reduce corruption and increase the standard of living. After Mwanawasa’s death, Rupiah Banda presided as Acting President before being elected President in 2008. Holding office for only three years, Banda stepped down after his defeat in the 2011 elections by Patriotic Front party leader Michael Sata. Sata died on 28 October 2014, the second Zambian president to die in office. Guy Scott served briefly as interim president until new elections were held on 20 January 2015, in which Edgar Lungu was elected as the sixth President.