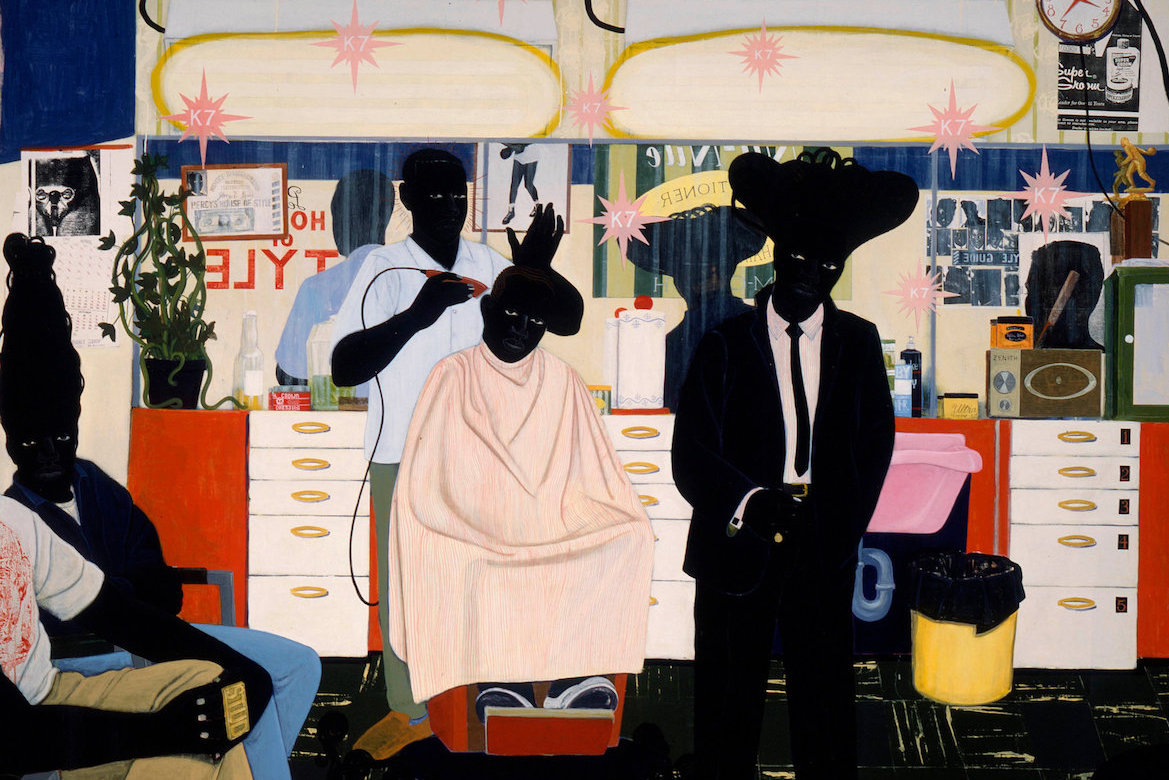 Black Social Photography in South Africa: Before & After

BY   Randy Kennedy
PUB   The New York Times [/two_fifth][three_fifth_last padding=”0 0px 0 10px”][perfectpullquote align=”full” cite=”” link=”” color=”” class=”” size=”14″]Kerry James Marshall, whose highly anticipated retrospective, “Mastry,” opens Oct. 25 at the Met Breuer, is steeped in classical training more thoroughly than almost any painter of his generation.[/perfectpullquote] He’s spent hundreds of hours in figure-drawing classes and anatomical studies, honing techniques developed over centuries by idols like Veronese and Rembrandt, to “get up alongside them on the wall,” as he says.

But the other day in his studio in the Bronzeville district on this city’s South Side, he took me upstairs to show off some painting implements certainly unavailable in Renaissance Venice or Baroque Amsterdam. Opening a plastic bin, he produced a handful of plastic noggins severed from bobblehead dolls — mostly of professional basketball players like James Harden and Sheryl Swoopes, along with the odd Michael Jackson or Muhammad Ali.

“These have become really invaluable to me,” said Mr. Marshall, who turns 61 next month but glows with childlike intensity when he talks about how he does what he does. “Working from live models is too much trouble; it takes too much time.[perfectpullquote align=”full” cite=”” link=”” color=”” class=”” size=”14″]Kerry James Marshall, whose highly anticipated retrospective, “Mastry,” opens Oct. 25 at the Met Breuer, is steeped in classical training more thoroughly than almost any painter of his generation.[/perfectpullquote] These things are actually incredibly accurate.” Turning a head appreciatively between his fingers, he added, “I can look at them from any angle, and they give me a basis of facial structure and head shape.”

The heads are a perfect illustration of the dual mission Mr. Marshall has been pursuing with a kind of holy fervor for almost 40 years now: building a sturdy bridge for figurative painting from the 15th century to ours, over treacherous spans of recent history that declared both figuration and painting to be finished — and at the same time trying to rewrite history itself.

The painter Kerry James Marshall’s retrospective, “Mastry,” opens at the Met Breuer next month. Here is his “De Style” from 1993. Credit 2015 Museum Associates/LACMA; Licensed by Art Resource, NY
[two_fifth padding=”0 25px 0 10px”]Kerry James Marshall
ARTIST: PAINTING, DRAWING, VIDEO AND INSTALLATION[/two_fifth][three_fifth_last padding=”0 0px 0 10px”]Kerry James Marshall challenges the marginalization of African-Americans through his formally rigorous paintings, drawings, videos, and installations, whose central protagonists are always, in his words, “unequivocally, emphatically black.” As he describes, his work is rooted in his life experience: “You can’t be born in Birmingham, Alabama, in 1955 and grow up in South Central [Los Angeles] near the Black Panthers headquarters, and not feel like you’ve got some kind of social responsibility. You can’t move to Watts in 1963 and not speak about it.” Marshall’s erudite knowledge of art history and black folk art structures his compositions; he mines black culture and stereotypes for his unflinching subject matter. In Black Star (2011), a nude black woman bursts through a Frank Stella-like canvas, commanding attention and daring viewers to consider how she has been (and how she should be) seen and portrayed.
See Also

American, b. 1955, Birmingham, Alabama, based in Chicago, Illinois