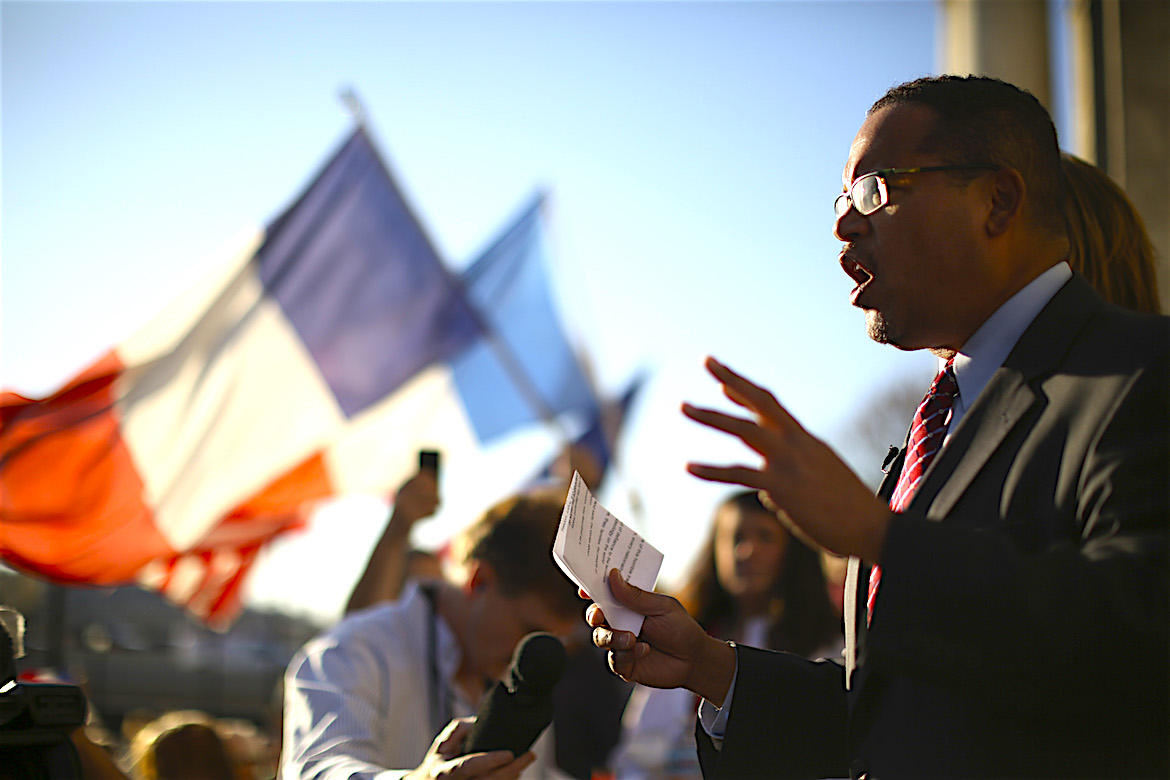 BY   Keith Ellison
PUB   The Washington Post [/two_fifth][three_fifth_last padding=”0 0px 0 10px”][perfectpullquote align=”full” cite=”” link=”” color=”” class=”” size=”14″]Fifteen years after 9/11, American Muslims have seen both progress and peril.[/perfectpullquote] Fifteen years ago, the United States was attacked by terrorists claiming to act in the name of Islam. America’s response? “United We Stand.” Yet now it feels like Muslims face more hatred in 2016 than on Sept. 11, 2001.

Back then, President George W. Bush, no liberal, visited a mosque in Washington, D.C., just days later to show solidarity with Muslims, saying, “The face of terror is not the true faith of Islam. That’s not what Islam is all about. Islam is peace. These terrorists don’t represent peace. They represent evil and war.” People came together in gratitude for those who risked everything rescuing others during the attacks, including Mohammed Salman Hamdani, a 23-year-old first responder who died saving lives in the World Trade Center. He was Muslim. So am I.

Before that day, America’s Muslim community wasn’t the focus of much political discussion. Now, Islam and Muslims are regular topics on talk shows and in headlines, often in a negative light. The political landscape has changed dramatically for America’s Muslim community — for better and worse. Increased Muslim visibility and engagement in the community are occurring at the same time as an increase in anti-Muslim hate crimes, and this is not a coincidence: A recent study by the Bridge Initiative found that anti-Muslim crimes have increased during this election season, with 2015 having the most anti-Muslim violence and vandalism of any year since 9/11. Looking at the data, there is a clear uptick in anti-Muslim crime associated with the rise of Donald Trump. In fact, two Somali Muslim men were recently shot in my own city of Minneapolis because of their faith. For American Muslims, the period since 9/11 has represented both progress and peril — and many fear what may lie ahead.

Congressman Keith Ellison speaks during a Dining and Discussion event at the Diyanet Center of America Fellowship Hall in Washington, USA. Getty Images

WASHINGTON, UNITED STATES – APRIL 13: U.S. Rep. Keith Ellison (D-MN) (R) speaks during a news conference in front of the Supreme Court April 13, 2016 in Washington, DC. The Congressional Progressive Caucus held a news conference with federal workers and other groups “to call on Senate Republicans to do their job and hold a hearing on the Supreme Court nomination of Merrick Garland.” (Photo by Alex Wong/Getty Images)

Congressman Keith Ellison addresses the marchers from the steps of the Basilica in Minneapolis, Sunday, Nov. 15, 2015, during a march to show solidarity with France after the deadly attacks in Paris on Friday. (Jeff Wheeler/Star Tribune via AP) MANDATORY CREDIT; ST. PAUL PIONEER PRESS OUT; MAGS OUT; TWIN CITIES LOCAL TELEVISION OUT
[two_fifth padding=”0 25px 0 10px”]Keith Ellison
U.S. MEMBER OF CONGRESS, MINNESOTA[/two_fifth][three_fifth_last padding=”0 0px 0 10px”]Keith Maurice Ellison (born August 4, 1963) has been the U.S. Representative for Minnesota’s 5th congressional district since 2007. He is a member of the Democratic-Farmer-Labor Party (DFL), the Minnesota state Democratic Party affiliate. The district centers on Minneapolis and surrounding suburbs. Ellison is a co-chair of the Congressional Progressive Caucus and a Chief Deputy Whip, also notably serving in the House Committee on Financial Services.
See Also