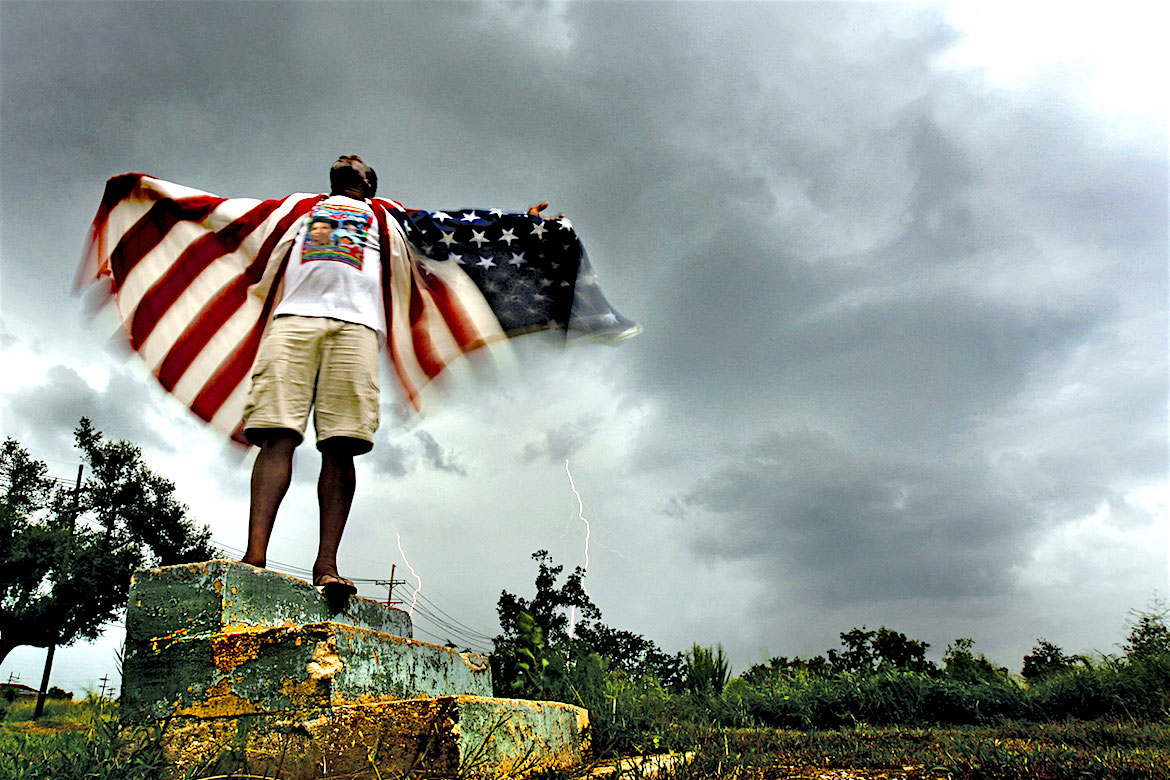 For Nearly 150 Years, This One House Told a Novel Story About the African-American Experience

A.C. Thompson’s reporting on New Orleans was directed and underwritten by the Investigative Fund at The Nation Institute. ProPublica provided additional support, as did the Center for Investigative Reporting and New America Media.

The way Donnell Herrington tells it, there was no warning. One second he was trudging through the heat. The next he was lying prostrate on the pavement, his life spilling out of a hole in his throat, his body racked with pain, his vision blurred and distorted.

It was September 1, 2005, some three days after Hurricane Katrina crashed into New Orleans, and somebody had just blasted Herrington, who is African-American, with a shotgun. “I just hit the ground. I didn’t even know what happened,” recalls Herrington, a burly 32-year-old with a soft drawl.

The sudden eruption of gunfire horrified Herrington’s companions–his cousin Marcel Alexander, then 17, and friend Chris Collins, then 18, who are also black. “I looked at Donnell and he had this big old hole in his neck,” Alexander recalls. “I tried to help him up, and they started shooting again.” Herrington says he was staggering to his feet when a second shotgun blast struck him from behind; the spray of lead pellets also caught Collins and Alexander. The buckshot peppered Alexander’s back, arm and buttocks.

Herrington shouted at the other men to run and turned to face his attackers: three armed white males. Herrington says he hadn’t even seen the men or their weapons before the shooting began. As Alexander and Collins fled, Herrington ran in the opposite direction, his hand pressed to the bleeding wound on his throat. Behind him, he says, the gunmen yelled, “Get him! Get that nigger!”

The attack occurred in Algiers Point. The Point, as locals call it, is a neighborhood within a neighborhood, a small cluster of ornate, immaculately maintained 150-year-old houses within the larger Algiers district. A nationally recognized historic area, Algiers Point is largely white, while the rest of Algiers is predominantly black. It’s a “white enclave” whose residents have “a kind of siege mentality,” says Tulane University historian Lance Hill, noting that some white New Orleanians “think of themselves as an oppressed minority.”

A wide street lined with towering trees, Opelousas Avenue marks the dividing line between Algiers Point and greater Algiers, and the difference in wealth between the two areas is immediately noticeable. “On one side of Opelousas it’s ‘hood, on the other side it’s suburbs,” says one local. “The two sides are totally opposite, like muddy and clean.”

Algiers Point has always been somewhat isolated: it’s perched on the west bank of the Mississippi River, linked to the core of the city only by a ferry line and twin gray steel bridges. When the hurricane descended on Louisiana, Algiers Point got off relatively easy. While wide swaths of New Orleans were deluged, the levees ringing Algiers Point withstood the Mississippi’s surging currents, preventing flooding; most homes and businesses in the area survived intact. As word spread that the area was dry, desperate people began heading toward the west bank, some walking over bridges, others traveling by boat. The National Guard soon designated the Algiers Point ferry landing an official evacuation site. Rescuers from the Coast Guard and other agencies brought flood victims to the ferry terminal, where soldiers loaded them onto buses headed for Texas.

[two_fifth padding=”0 25px 0 10px”]Hurrican Katrina
HISTORIC ATLANTIC WEATHER EVENT[/two_fifth][three_fifth_last padding=”0 0px 0 10px”]Hurricane Katrina was the eleventh named storm and fifth hurricane of the 2005 Atlantic hurricane season. It was the costliest natural disaster, as well as one of the five deadliest hurricanes, in the history of the United States. The storm is currently ranked as the third most intense United States landfalling tropical cyclone, behind only the 1935 Labor Day hurricane and Hurricane Camille in 1969. Overall, at least 1,245 people died in the hurricane and subsequent floods, making it the deadliest United States hurricane since the 1928 Okeechobee hurricane. Total property damage was estimated at $108 billion (2005 USD), roughly four times the damage wrought by Hurricane Andrew in 1992.
See Also

Katrina originated over the Bahamas on August 23 from the interaction between a tropical wave and the remnants of Tropical Depression Ten. Early the following day, the new depression intensified into Tropical Storm Katrina. The cyclone headed generally westward toward Florida and strengthened into a hurricane only two hours before making landfall at Hallandale Beach and Aventura on August 25. After very briefly weakening to a tropical storm, Katrina emerged into the Gulf of Mexico on August 26 and began to rapidly deepen. The storm strengthened to a Category 5 hurricane over the warm waters of the Gulf of Mexico, but weakened before making its second landfall as a Category 3 hurricane on August 29 in southeast Louisiana.

Katrina caused severe destruction along the Gulf coast from central Florida to Texas, much of it due to the storm surge and levee failure. Severe property damage occurred in coastal areas, such as Mississippi beachfront towns; over 90 percent of these were flooded. Boats and casino barges rammed buildings, pushing cars and houses inland; water reached 6–12 miles (10–19 km) from the beach.

Over fifty breaches in New Orleans’s hurricane surge protection are the cause of the majority of the death and destruction during Katrina on August 29, 2005. Eventually 80% of the city and large tracts of neighboring parishes became flooded, and the floodwaters lingered for weeks. According to a modeling exercise conducted by the U.S. Army Corps of Engineers (USACE), two-thirds of the deaths in Greater New Orleans were due to levee and floodwall failure. All of the major studies concluded that the USACE, the designers and builders of the levee system as mandated by the Flood Control Act of 1965, is responsible. This is mainly due to a decision to use shorter steel sheet pilings in an effort to save money. In January 2008, Judge Stanwood Duval, U.S. District Court, ruled that despite the Corps’ role in the flooding, the agency could not be held financially liable because of sovereign immunity in the Flood Control Act of 1928. Exactly ten years after Katrina, J. David Rogers, lead author of a new report in the official journal of the World Water Council concluded that the flooding during Katrina “could have been prevented had the corps retained an external review board to double-check its flood-wall designs.”