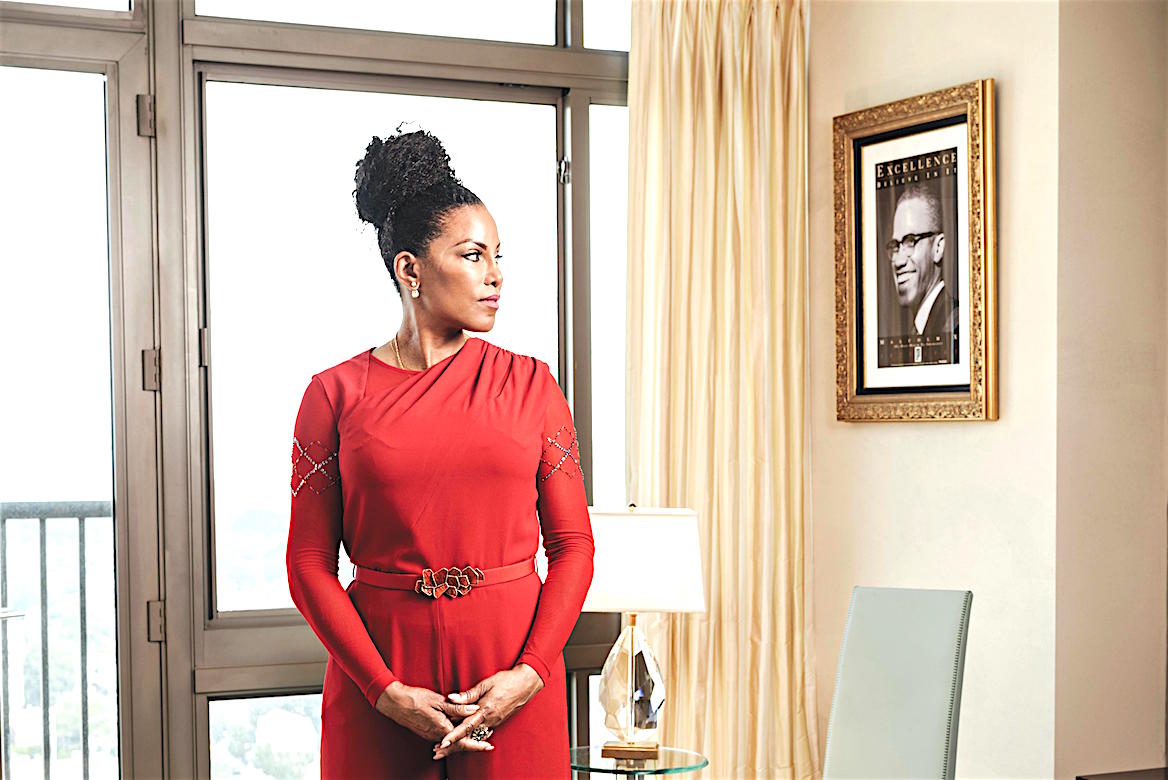 The next generation is following in the footsteps of its forebears[/two_fifth][three_fifth_last padding=”0 0px 0 10px”]As a part of the September issue devoted to the grand opening of the Smithsonian’s newest museum, the National Museum of African American History and Culture, our writers caught up with Bernice King, Ilyasah Shabazz, Cheryl Brown Henderson, Gina Belafonte, Ayanna Gregory and Ericka Suzanne, all children of prominent Civil Rights leaders of the 1960s and ’70s. Here are their stories:

Martin Luther King Jr.’s message of peace might seem like a distant dream after this summer of violence—which is why his daughter, Bernice King, believes it’s more urgent than ever “My heart aches right now, because the next generation deserves a lot better.”

Bernice King, the youngest child of Martin Luther King Jr., was sitting on the top floor of the King Center, the Atlanta educational nonprofit she has run since 2013, staring down at her smartphone. The screen pulsed with the news of the week: Protests in Baton Rouge. Protests in New York. Five cops assassinated in Dallas. A Minnesota man named Philando Castile fatally shot in his car by a police officer while his fiancée streamed the encounter on Facebook Live.

King says she watched the video, all the more devastating because of the woman’s young daughter in the back seat: “And she goes, ‘Mommy, I’m here with you,’ or something like that, and watching that, I just broke down in tears. All I could think about was being at my father’s funeral, sitting on my mother’s lap and looking up at her, and being so puzzled, so troubled, so perplexed and confused, and, phew, I will tell you: It brought me back.”

Five years old at the time of her father’s death, King has spent most of her life grappling with his oversized legacy. As a young woman she dodged the ministry, stumbled through law school—at one point, she says, she contemplated suicide—and clerked for a judge in Atlanta. “I wanted to feel free to be Bernice, to find myself amid all the trauma, and not to get lost in all that Kingness,” she recalls. “But the whole time, I was staying involved with the King Center”—which her mother, the late Coretta Scott King, founded in 1968—“attending the conferences on my father’s nonviolent philosophy, and eventually I decided that’s where my heart was.”

Not that it’s been easy. In 2005, then a member of the King Center’s board, she was criticized for her use of center grounds for a march against same-sex marriage legislation. And in 2006, she attempted, unsuccessfully, to block the transfer of nearby historic buildings to the National Park Service, only to fall into a series of spats with her two brothers. (Her sister died in 2007.)

Now King finds herself at the helm of the King Center—with its mission to spread the gospel of nonviolent protest—at perhaps the most fraught moment for American race relations in a generation. “I have a lot of sadness about what’s happening in our nation,” she says. “It just seems like we’ve become so polarized. So focused on violence.” But she takes solace in the work the center does: the educational seminars the organization sponsors in the field, in places like Ferguson, Missouri; the ongoing stewardship of the vast King archives.

“I see a major part of my job as keeping Daddy’s words and philosophy alive,” King says. “Because I think if we could get back to that philosophy, to listening and not being afraid of exploring the information on the other side, and finding ways to make connections without compromising personal principles—well, we’d move things forward.” Then she offered a piece of wisdom from a different parent. “It’s like my mother said: ‘Struggle is a never-ending process. Freedom is never really won, you earn it and win it in every generation.’ That’s how I feel today, you know? The fight isn’t over.” — Matthew Shaer

Her father advocated using either “the ballot or the bullet.” But Ilyasah Shabazz wants to show another side of Malcolm X. Ilyasah Shabazz at her home in New York (Wayne Lawrence)

American singer Harry Belafonte, left holds his son David, while his wife Julia holds baby daughter Gina, as they posed for a family group shot at Fiumicino Airport in Rome, Italy, on Feb. 28, 1962 upon their arrival from Tunis. Belafonte will spend a couple of days in Rome. (AP Photo)

Dick Gregory used humor to bring Americans to action, but his daughter Ayanna takes a more dramatic turn on the stage
[two_fifth padding=”0 25px 0 10px”]National Museum of African American History & Culture
SMITHSONIAN MUSEUM, WASHINGTON DC[/two_fifth][three_fifth_last padding=”0 0px 0 10px”]The National Museum of African American History and Culture (NMAAHC) is a Smithsonian Institution museum established in 2003. The museum’s building, designed by David Adjaye, is currently under construction on the National Mall in Washington, D.C.. Early efforts to establish a federally owned museum featuring African American history and culture can be traced to 1915, although the modern push for such an organization did not begin until the 1970s.