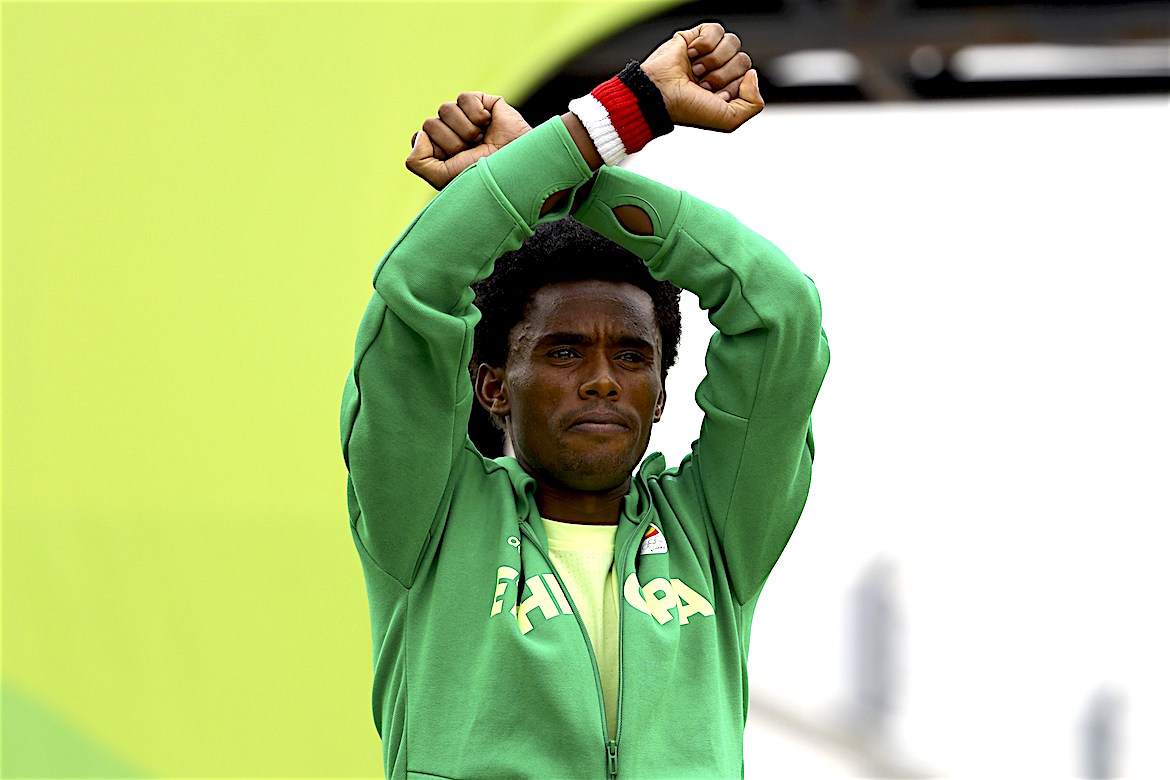 The marathon runner Feyisa Lilesa brought Ethiopia’s tension to the world’s attention when, upon passing the Olympic finish line, he crossed his wrists above his head.[/two_fifth][three_fifth_last padding=”0 0px 0 10px”]It was a gesture in solidarity with anti-government protesters among the Oromo people. Since November of 2015, hundreds have been killed during protests centering around the expansion of Addis Ababa and its impending effects on the Oromo. This documentary by the Thomas Reuters Foundation explores this recent hostility and profiles the young people who stand in opposition of the Ethiopian government’s crackdown. [/three_fifth_last]

People mourn the death of Dinka Chala who was shot dead by the Ethiopian forces the day earlier, in the Yubdo Village, about 100 km from Addis Ababa in the Oromia region, on 17 December 2015. Dinka Chala was accused of protesting, but his family says he was not involved. Tensions have been riding high between the population of Oromia and the Federal Government of Ethiopia. The population of Oromia are unhappy with the current Master Plan which is overtaking Oromo lands surrounding Addis Ababa. The protests have been ongoing for the past three weeks, with government responding in force with live ammunition. The Government also claims death tolls of around 5, the unofficial figure made by protesters has reached up to 40+. / AFP / ZACHARIAS ABUBEKER (Photo credit should read ZACHARIAS ABUBEKER/AFP/Getty Images)

Ethiopian Unrest
[two_fifth padding=”0 25px 0 10px”]Ethiopia
OFFICIALLY: FEDERAL DEMOCRATIC REPUBLIC OF ETHIOPIA[/two_fifth][three_fifth_last padding=”0 0px 0 10px”]Ethiopia, officially known as the Federal Democratic Republic of Ethiopia, is a sovereign state located in the Horn of Africa. It shares a border with Eritrea to the north and northeast, Djibouti and Somalia to the east, Sudan and South Sudan to the west, and Kenya to the south. With nearly 100 million inhabitants, Ethiopia is the most populous landlocked country in the world, as well as the second-most populous nation on the African continent after Nigeria. It occupies a total area of 1,100,000 square kilometres (420,000 sq mi), and its capital and largest city is Addis Ababa.

Some of the oldest evidence for anatomically modern humans has been found in Ethiopia, which is widely considered the region from which modern humans first set out for the Middle East and places beyond. According to linguists, the first Afroasiatic-speaking populations settled in the Horn region during the ensuing Neolithic era. Tracing its roots to the 2nd millennium BC, Ethiopia was a monarchy for most of its history. During the first centuries AD, the Kingdom of Aksum maintained a unified civilization in the region, followed by the Ethiopian Empire circa 1137.

Ethiopia derived prestige with its uniquely successful military resistance during the late 19th-century Scramble for Africa, becoming the only African country to defeat a European colonial power and retain its sovereignty. Subsequently, many African nations adopted the colors of Ethiopia’s flag following their independence. It was the first independent African member of the 20th-century League of Nations and the United Nations. In 1974, at the end of Haile Selassie’s reign, power fell to a communist military dictatorship known as the Derg, backed by the Soviet Union, until it was defeated by the Ethiopian People’s Revolutionary Democratic Front, which has ruled since about the time of the collapse of the Soviet Union in 1991.

Ethiopia is a multilingual nation with around 80 ethnolinguistic groups, the four largest of which are the Oromo, Amhara, Somali, and Tigrayans. Most people in the country speak Afroasiatic languages of the Cushitic or Semitic branches. Additionally, Omotic languages are spoken by ethnic minority groups inhabiting the southern regions. Nilo-Saharan languages are also spoken by the nation’s Nilotic ethnic minorities.

Ethiopia is the place of origin for the coffee bean which originated from the place called Kefa (which was one of the 14 provinces in the old Ethiopian administration). It is a land of natural contrasts, with its vast fertile West, jungles, and numerous rivers, and the world’s hottest settlement of Dallol in its north. The Ethiopian Highlands are Africa’s largest continuous mountain ranges, and Sof Omar Caves contain Africa’s largest cave. Ethiopia has the most UNESCO World Heritage Sites in Africa.