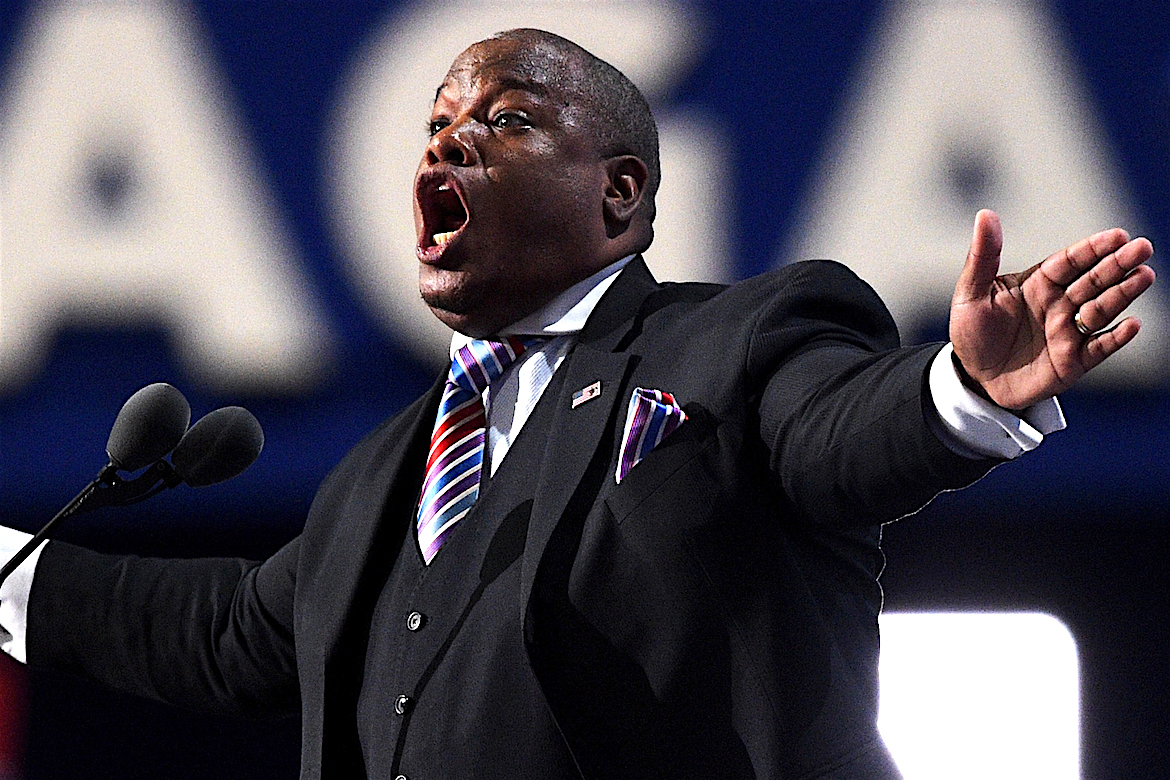 The pastor was aboard the real-estate mogul’s private jet last week, flying from Mississippi to New York, where the two spoke about Trump’s upcoming appearance at another black pastor’s congregation in Detroit on Saturday.

“It is the first time he’s speaking in Detroit, to the African-American community, and the key word is ‘compassion,’” Burns told The Daily Beast in a brief phone interview. “I want them to get to know the same guy I’ve grown to know and love.”

Burns said one of the things that originally drew him to Trump during the Republican primary was Trump’s stand against the supposed “War on Christmas.”

“We’ve become so politically correct that Christianity has taken a back seat,” Burns observed.

For the past year, Burns has been Trump’s go-to campaign-trail pastor. And he has denounced Hillary Clinton, liberals, and political correctness in much the same provocative manner as the Republican presidential nominee.

So when Burns, a conservative black pastor, tweeted a cartoon of Hillary Clinton in blackface—“Black Americans, THANK YOU FOR YOUR VOTES and letting me use you again..See you again in 4 years,” he posted—it wasn’t out of character.

Pastor Mark Burns arrives for a meeting with Presidential candidate Donald Trump at his office in the Manhattan borough of New York November 30, 2015. REUTERS/Lucas Jackson

CLEVELAND, OH – JULY 21: Pastor Mark Burns, Co-Founder & CEO of The NOW Television Network, gestures as he delivers a speech on the fourth day of the Republican National Convention on July 21, 2016 at the Quicken Loans Arena in Cleveland, Ohio. Republican presidential candidate Donald Trump received the number of votes needed to secure the party’s nomination. An estimated 50,000 people are expected in Cleveland, including hundreds of protesters and members of the media. The four-day Republican National Convention kicked off on July 18. (Photo by Jeff Swensen/Getty Images)
[two_fifth padding=”0 25px 0 10px”]Mark Burns
TELEVANGELIST[/two_fifth][three_fifth_last padding=”0 0px 0 10px”]John Mark Burns (born September 21, 1979) is a Evangelical Christian televangelist and pastor of The Harvest Praise & Worship Center from the United States, and supporter of Donald Trump as the 2016 US Republican Party nominee for the President of the United States. Burns is the Co-Founder & CEO of The NOW Television Network, a Christian television network based in South Carolina.


Burns was born in Anderson, South Carolina on September 21, 1979 as John Mark Burns, to parents Pastor Otis and Evangelist Debra Burns. At an early age, he began playing the keyboard and singing gospel music with his family group, The Burns Brothers of Belton, SC, traveling extensively around the country. In 1995, at the age of 16, Burns was licensed as a Minister of The Gospel under Otis Burns at The Mt. Pleasant Missionary Baptist Church in Pelzer, SC. While preaching, he attended Belton-Honea Path High School and in 1998 received a South Carolina GED from the SC Board of Education. Burns later continued his education at the North Greenville University’s School of Business. On February 19, 2005, Burns was catechized and ordained at The Traveler’s Rest Baptist Church in Seneca, SC.

Burns, along with his wife, Tomarra Burns, founded The NOW Television Network, a Christian television network based in South Carolina on March 1, 2015. He is also the creator, executive producer and Host of Lift Your Voice Gospel Show.

Burns is married to Tomarra Burns and together they have 6 children residing in South Carolina.