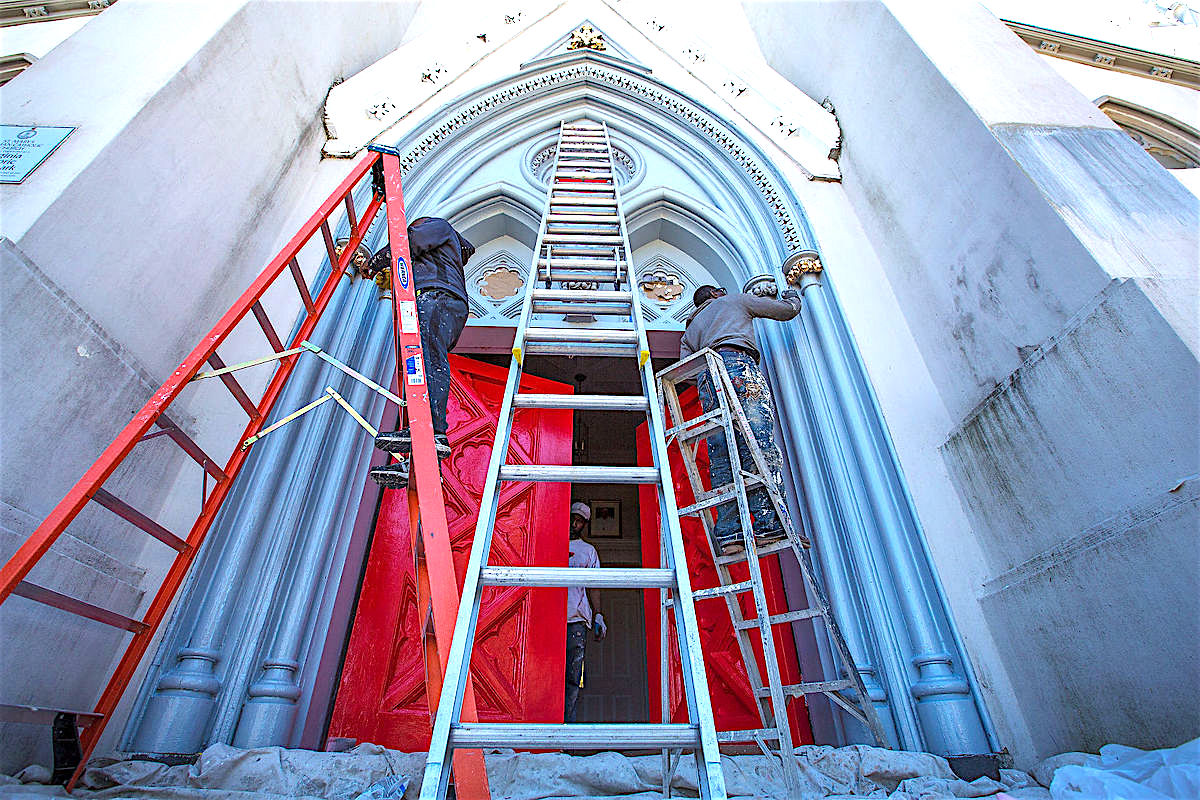 …Its predominately African-American worship community of some 900 households pulls from as far away as Williamsburg and North Carolina.[/two_fifth][three_fifth_last padding=”0 0px 0 10px”]It wasn’t Father Jim’s three-legged Golden Retriever named Trinity who met me at the top of the stairs on the first rain-chilled afternoon that I visited St. Mary’s. And it wasn’t the Father’s spontaneous invitation to travel to Rome with members of the church over what, coincidentally, would have been my 26th wedding anniversary in September and where my husband and I would have spent our 25th, had he not suddenly died some six weeks prior. It wasn’t even Father Jim’s pronouncement that, before being called to the priesthood, if he was in a church on Sunday morning, it was because he had passed out on the steps the night before.

No. Though all that played a role, it was something more that captured my heart and mind. Something nearly ineffable. Something, dare I say, spiritual.

St. Mary’s began its life in 1791 as St. Patrick’s Church, a community of faithful French Catholic refugees—without a proper church building. These individuals—slave owners and slaves—were deposited by the French navy in Norfolk, having fled the Haitian Revolution in the French colony, St. Domingue. There, on the island, the French Revolution of 1789 had split the white minority into Royalists and Revolutionaries. With their island nation divided, the slaves sensed an opportunity and staged a massive rebellion.

The original St. Mary’s church was built in 1842, destroyed by fire in 1856—only a wooden crucifix survived—and rebuilt in 1858. African-American Catholics began attending the church in 1886, consigned to a portion of the balcony. Three years later, the Josephites began coming from Richmond, founding St. Joseph’s Black Catholic parish to serve the spiritual needs of the black community. In 1961, St. Joseph’s merged with St. Mary’s, and on November 1, 1989, the newly renovated/restored edifice was rededicated.

Shortly thereafter, on December 8, 1991, the 200th anniversary of the church, the pope bestowed on St. Mary of the Immaculate Conception the designation of Minor Basilica, making it the only African-American basilica in the U.S. and a place of pilgrimage recognized for its distinguished nature. But nearly two decades later, the stately structure is in critical need of major repair.

Wrapped by the City Hall ramp of I-264, its red Jubilee Doors shining like a beacon against the white walls of this handsome Neo-Gothic structure with its proud spire, this “Mother Church of Catholicism in Hampton Roads” is tucked into the Tidewater Gardens housing project. However, its predominately African-American worship community of some 900 households pulls from as far away as Williamsburg and North Carolina.

Basilica of Saint Mary of the Immaculate Conception
[two_fifth padding=”0 25px 0 10px”]Norfolk
INDEPENDENT CITY, COMMONWEALTH OF VIRGINIA, US[/two_fifth][three_fifth_last padding=”0 0px 0 10px”]At the 2010 census, the population was 242,803; in 2015, the population was estimated to be 247,189[4] making it the second-most populous city in Virginia, behind neighboring Virginia Beach.


Norfolk is located at the core of the Hampton Roads metropolitan area, named for the large natural harbor of the same name located at the mouth of Chesapeake Bay. It is one of nine cities and seven counties that constitute the Hampton Roads metro area, officially known as the Virginia Beach-Norfolk-Newport News, VA-NC MSA. The city is bordered to the west by the Elizabeth River and to the north by the Chesapeake Bay. It also shares land borders with the independent cities of Chesapeake to its south and Virginia Beach to its east. One of the oldest of the cities in Hampton Roads, Norfolk is considered to be the historic, urban, financial, and cultural center of the region.

The city has a long history as a strategic military and transportation point. The largest Navy base in the world, Naval Station Norfolk, is located in Norfolk along with one of NATO’s two Strategic Command headquarters. The city also has the corporate headquarters of Norfolk Southern Railway, one of North America’s principal Class I railroads, and Maersk Line, Limited, which manages the world’s largest fleet of US-flag vessels. As the city is bordered by multiple bodies of water, Norfolk has many miles of riverfront and bayfront property, including beaches on the Chesapeake Bay. It is linked to its neighbors by an extensive network of Interstate highways, bridges, tunnels, and three bridge-tunnel complexes—the only bridge-tunnels in the United States.