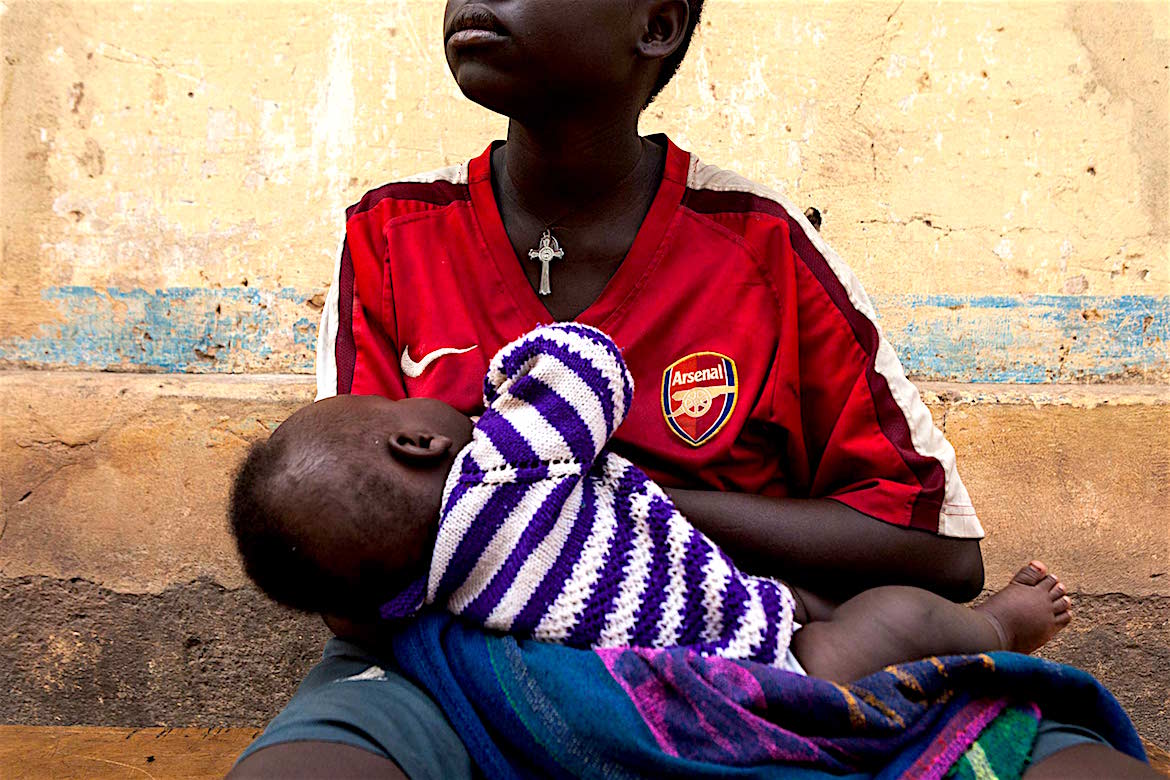 Members of a U.N. peacekeeping force in the Central African Republic allegedly turned to sexual predation, betraying their duty to protect[/two_fifth][three_fifth_last padding=”0 0px 0 10px”]
The neighborhood is a patchwork of low-slung buildings scorched and looted at the height of the civil war, a place where the United Nations was supposed to come to the rescue. But in a number of homes, women and girls are raising babies they say are the children of U.N. troops who abused or exploited them.

“A horrible thing,” says an elfin 14-year-old girl, who describes how a Burundian soldier dragged her into his barracks and raped her, leaving her pregnant with the baby boy she now cradles uncomfortably.

The allegations come amid one of the biggest scandals to plague the United Nations in years. Since the U.N. peacekeeping mission here began in 2014, its employees have been formally accused of sexually abusing or exploiting 42 local civilians, most of them underage girls.

U.N. Secretary General Ban Ki-moon has called sexual abuse by peacekeepers “a cancer in our system.” In August, the top U.N. official here was fired for failing to take enough action on abuse cases. Nearly 1,000 troops whose units have been tied to abuses have been expelled, or will be soon. Among them is the entire contingent from the Democratic Republic of the Congo.

But the victims appear to be more numerous than the United Nations has reported so far. In a corner of the capital city known as Castors, near the U.N. headquarters in the country, The Washington Post interviewed seven women and girls who described contact with peacekeepers that violated U.N. regulations against sexual exploitation and abuse. Five of them said they exchanged sex for food or money — sometimes as little as $4 — while their country was rocked by civil war and families were going hungry. Only two had reported their cases to the United Nations.

Bangui, CAR- A 16-year-old girl inspects the remains of her family’s home. She said that last year, before violence forced the family to flee, she had a sexual relationship with a Moroccan peacekeeper. Over several weeks and five or six meetings, he gave her a total of about $50, she says. (By: Jane Hahn)

Bangui, CAR- A young woman, holding her 1-year-old daughter, says that when she was 17, a peacekeeper from the Republic of the Congo coerced her into having sex for money and food, leaving her pregnant. (By: Jane Hahn)

Bangui, CAR- Annie, 29, holds her 2-month-old son, who she says was fathered by a soldier from Gabon. (By: Jane Hahn)

Bangui, CAR- Rosine Mengue, 18, holds her 1-year-old son in her home in the Castors neighborhood in Bangui, Central African Republic on Sunday, February 14, 2016. She says she was 16 when a Moroccan peacekeeper coerced her into sex for money, paying her a total of $8 for two visits and making her pregnant. (Jane Hahn for the Washington Post)
[two_fifth padding=”0 25px 0 10px”]Democratic Republic of the Congo
COUNTRY, CENTRAL AFRICA[/two_fifth][three_fifth_last padding=”0 0px 0 10px”]The Democratic Republic of the Congo (/ˈkɒŋɡoʊ/; French pronunciation: ​[kɔ̃ɡo]; French: République démocratique du Congo), also known as DR Congo, DRC, DROC, Congo-Kinshasa, or simply the Congo is a country located in Central Africa. From 1971 to 1997 it was named Zaire, and from 1908 to 1960 it was called the Belgian Congo. The DRC borders the Republic of the Congo, the Central African Republic, and South Sudan to the north; Uganda, Rwanda, Burundi and Tanzania to the east; Zambia and Angola to the south; and the Atlantic Ocean to the west and southwest. It is the second largest country in Africa by area, the largest in Subsaharan Africa, and the eleventh largest in the world. With a population of over 79 million, the Democratic Republic of the Congo is the most populated officially Francophone country, the fourth most populated nation in Africa and the nineteenth most populated country in the world.


The Congolese Civil Wars, which began in 1996, brought about the end of Mobutu Sese Seko’s 32-year reign and devastated the country. The wars ultimately involved nine African nations, multiple groups of UN peacekeepers and twenty armed groups, and resulted in the deaths of 5.4 million people.

The Democratic Republic of Congo is extremely rich in natural resources, but political instability, a lack of infrastructure, deep rooted corruption, and centuries of both commercial and colonial extraction and exploitation have limited holistic development. Besides the capital, Kinshasa, the other major cities, Lubumbashi and Mbuji-Mayi, are both mining communities. DR Congo’s largest export is raw minerals, with China accepting over 50% of DRC’s exports in 2012. As of 2013, according to the Human Development Index (HDI), DR Congo has a low level of human development, ranking 176 out of 187 countries.