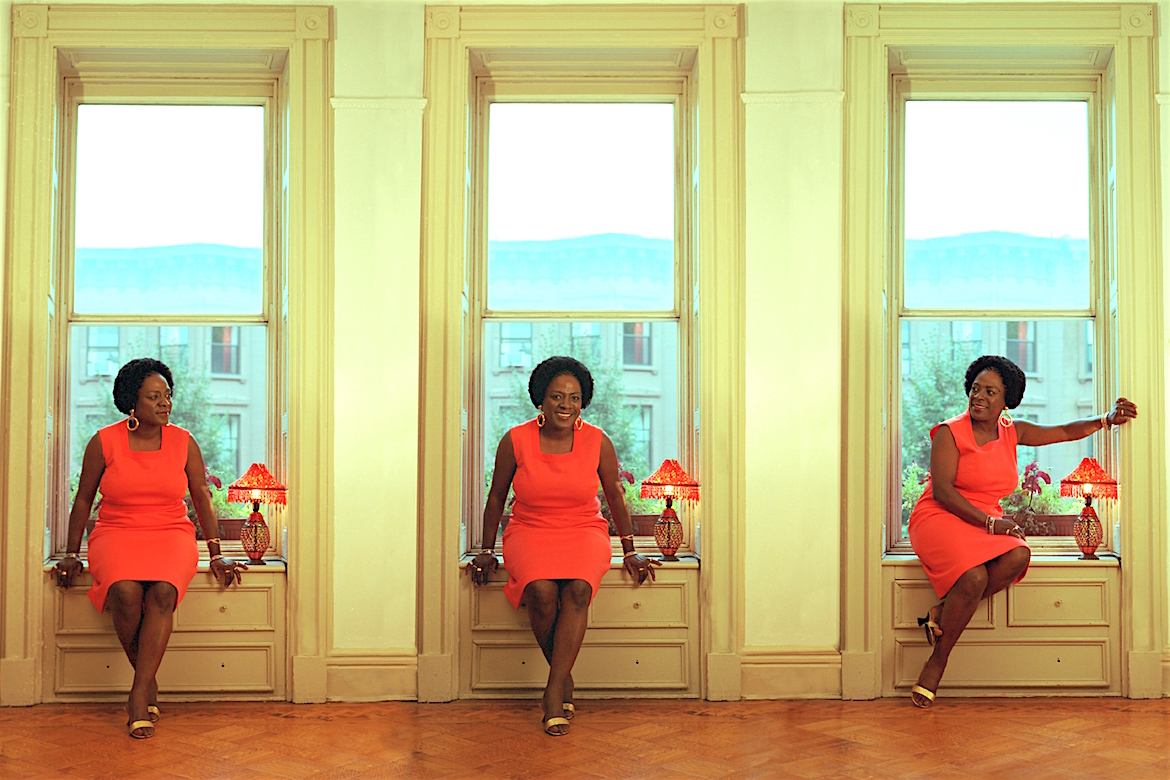 Sharon Jones & the Dap-Kings is a Grammy-nominated R&B band from Brooklyn. Their groove is funky like James Brown’s. Jones’ gyrations are as wild and ferocious as Tina Tuner’s.[/two_fifth][three_fifth_last padding=”0 0px 0 10px”]The group’s soul shakes and their lead singer’s indomitable spirit blend into something very special, heartfelt and familial. When Jones is diagnosed with pancreatic cancer, it rocks the band’s foundation. Her fight for life and that harrowing journey is what’s on view in this very emotional and inspiring documentary titled, “Miss Sharon Jones!”

Jones is the lead singer and the star attraction of her group. Her ability to perform and record determines whether the artists she loves can keep a roof over their heads and food on the table. She has a lot of responsibilities and a lot of reasons to want to beat her deadly illness. At just 4’11” she carries the weight of a mountain on her shoulders.

Sharon Jones’ new album with the Dap-Kings, Give the People What They Want, comes out Jan. 14.

Give the People What They Want, Sharon Jones’ new album with The Dap-Kings, comes out Jan. 14. Paul McGeiver/Courtesy of the artist

[two_fifth padding=”0 25px 0 10px”]Sharon Jones
SINGER[/two_fifth][three_fifth_last padding=”0 0px 0 10px”]Sharon Lafaye Jones (born May 4, 1956) is an American soul and funk singer. She is the lead singer of Sharon Jones & The Dap-Kings, a soul and funk band based in Brooklyn, New York. Jones experienced breakthrough success relatively late in life, releasing her first record when she was 40 years old. In 2014, Jones was nominated for her first Grammy, in the category Best R&B Album, for Give the People What They Want.


Jones was born in North Augusta, South Carolina, adjacent to Augusta, Georgia, to Ella Mae Price Jones and Charlie Jones. Jones is the youngest of six children; her siblings are Dora, Charles, Ike, Willa and Henry. Jones’s mother raised her deceased sister’s four children as well as her own children. She moved the family to New York when Sharon was a young child. As children, she and her brothers would often imitate the singing and dancing of James Brown. Her mother happened to know Brown, who was also from Augusta.

A regular gospel singer in church, Jones often entered talent shows backed by local funk bands in the early 1970s. Session work then continued with backing singing, often credited to Lafaye Jones, but in the absence of any recording contract as a solo singer, she spent many years working as a corrections officer at Rikers Island and as an armored car guard for Wells Fargo Bank, until receiving a mid-life career break in 1996 after she appeared on a session backing the soul and deep funk legend Lee Fields.

The session was organized by Gabriel Roth and Philip Lehman, owner of the now defunct French record label Pure Records. Jones was the only one of three singers called to the session to show up. Having completed all the backing parts herself, Roth and Lehman were suitably impressed with her performance and recorded “Switchblade”, a solo track with Jones. This track and “The Landlord” were included on the Soul Providers’ album Soul Tequila, released by Lehman on Pure circa 1996. The Soul Providers—with members of the Brooklyn bands Antibalas and the Mighty Imperials—later formed the Dap-Kings, Jones’s current backing band.

Launched on the back of the popularity of Desco Records, Daptone Records’ first release was a full-length album by Sharon Jones. A new band, the Dap-Kings, was formed from the ashes of the Soul Providers and the Mighty Imperials. Some of the musicians went on to record for Lehman’s Soul Fire label, while some formed the Budos Band, an Afro-beat band. From the original Soul Providers, Roth (also known as Bosco Mann) on bass, guitarist and emcee Binky Griptite, percussionist Fernando Velez, trumpet player Anda Szilagyi and organist Earl Maxton were joined by original Mighty Imperials saxophonist Leon Michels and drummer Homer Steinweiss, plus Neal Sugarman from Sugarman 3, to form The Dap-Kings.