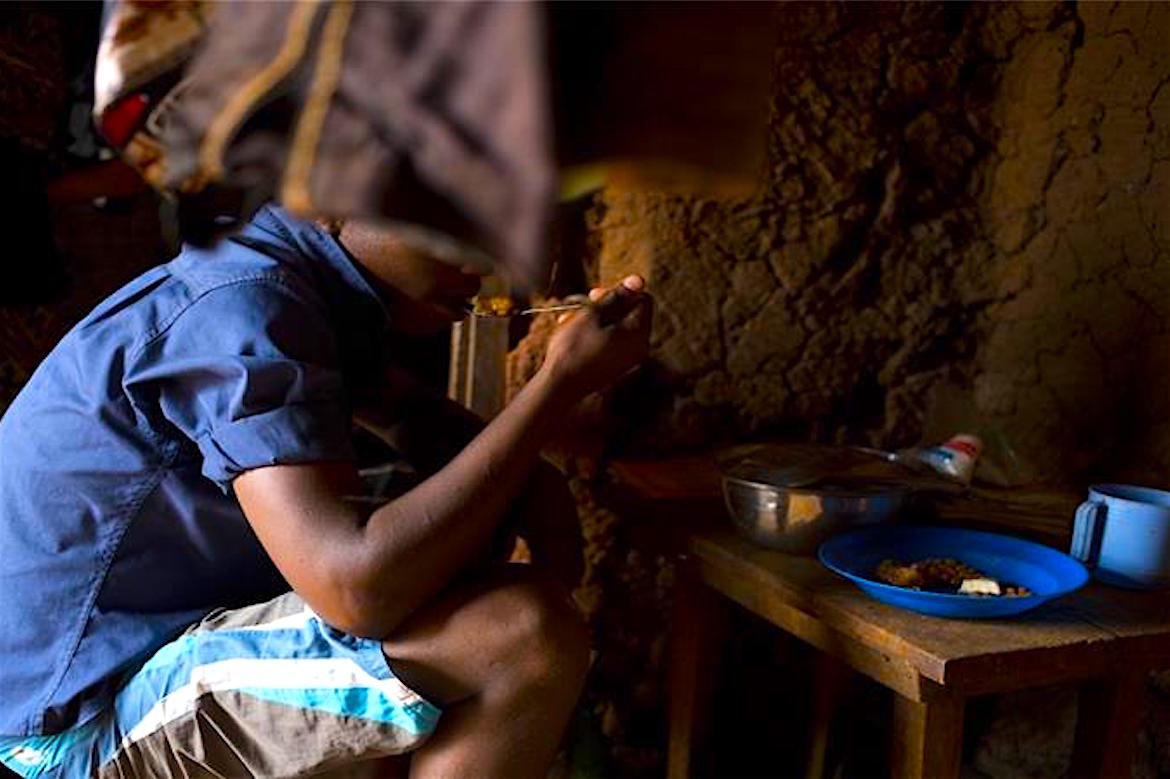 Can children forced to fight be reintegrated back into their families and communities?[/two_fifth][three_fifth_last padding=”0 0px 0 10px”]Busoni, Burundi – Jean-Pierre* is almost indistinguishable in the blur of schoolchildren. Only as he approaches, among a group of boys, clasping a book to his chest, does his unusually immaculate uniform come into focus.

It is bright and clean, bearing no trace of the torrential afternoon downpour in Busoni, Burundi, that has sent capillaries of rainwater racing across the playground.

The 17-year-old waves on his friends and hangs back, slowly breathing in air that tastes of mud. “I was so afraid that I would die,” he says softly, once the last of his classmates has disappeared. “I thought about my family and I was afraid that I would never see them again.”

Jean-Pierre is one of an unknown number of children from the East African nation of Burundi who were forced to become fighters after a political crisis broke out last April.

So far, more than 400 people have died in violence, while more than 260,000 have fled to neighbouring countries as refugees.

Children are bearing the brunt of the conflict as the economy nosedives and large portions of international aid are suspended, severely impacting access to social services such as healthcare, education, water and sanitation.

One day in March 2015, a stranger offered Jean-Pierre a job in a shop. Coming from a desperately poor family, and with debts to repay, he agreed. Hours later he found himself in a forest, surrounded by men in military uniforms.

Jean-Pierre, 17, sits on a bed in his home in the district of Busoni in Burundi [UNICEF/Prinsloo]

Seventeen-year-old former child soldier Jean-Pierre eats lunch at home in the district of Busoni in Burundi [UNICEF/Prinsloo]
[two_fifth padding=”0 25px 0 10px”]Burundi
EAST AFRICAN COUNTRY, GREAT LAKES REGION[/two_fifth][three_fifth_last padding=”0 0px 0 10px”]Burundi, officially the Republic of Burundi (Kirundi: Republika y’Uburundi, [buˈɾundi]; French: République du Burundi, [buʁundi] or [byʁyndi]), is a landlocked country in the African Great Lakes region of East Africa, bordered by Rwanda to the north, Tanzania to the east and south, and the Democratic Republic of the Congo to the west. It is also considered part of Central Africa. Burundi’s capital is Bujumbura. The southwestern border is adjacent to Lake Tanganyika.


The Twa, Hutu and Tutsi peoples have lived in Burundi for at least 500 years. For more than 200 of those years, Burundi was an independent kingdom, until the beginning of the twentieth century, when Germany colonized the region. After the First World War and Germany’s defeat, it ceded the territory to Belgium. Both Germans and Belgians ruled Burundi and Rwanda as a European colony known as Ruanda-Urundi. Despite common misconceptions, Burundi and Rwanda have never been under a common rule before European colonization. The European intervention exacerbated social differences between the Tutsi and Hutu, and contributed to political unrest in the region. Burundi gained independence in 1962 and initially had a monarchy, but a series of assassinations, coups, and a general climate of regional instability culminated in the establishment of a republic and one-party state in 1966. Bouts of ethnic cleansing and ultimately two civil wars and genocides during the 1970s and again in the 1990s left the country undeveloped and its population as one of the world’s poorest. 2015 witnessed large-scale political strife as President Pierre Nkurunziza opted to run for a third term in office, a coup attempt failed and the country’s parliamentary and presidential elections were broadly criticized by members of the international community.