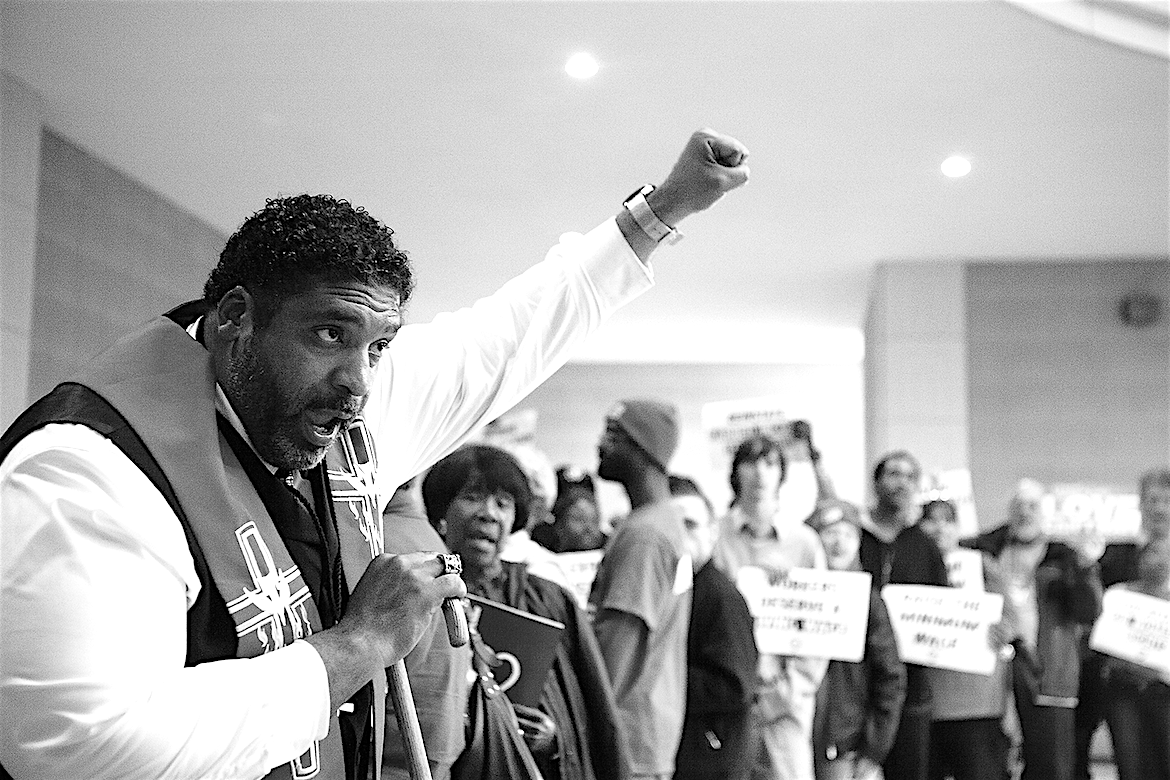 The Black Family in the Age of Mass Incarceration

Our moral movement is spreading out from North Carolina, one powerful gathering at a time.[/two_fifth][three_fifth_last padding=”0 0px 0 10px”]When I was growing up in eastern North Carolina, I used to love to sit in my grandmama’s kitchen and listen to her sing as she made dinner. Whenever she was done cooking, she’d give me a plate to eat. Then she and some of the other sisters from the church would make up some to-go plates and, with their aprons still on, they’d head out the door to visit the sick and shut-in. “We going to hope somebody,” Grandmama would say

For years, I thought Grandmama’s grammar was bad. I studied my lessons in English class and knew that “hope” wasn’t a verb. I didn’t dare correct Grandmama, but I knew better than to say I was going to hope somebody.

Laying on my back in the hospital bed, it struck me that Grandmama was a better theologian than I’d realized. When no one could help me, I needed somebody to hope me. Only a revival down on the inside was going to change my circumstances on the outside.

God sent an angel to hope me, and something powerful happened: Folks started getting together. My doctors got together with the nurses and my family got together with my therapists. My church got together and figured out how to help me get around. It was a dozen years before I could walk on my own, but the minute I had hope down on the inside and folks started coming together, I knew I had a future.

Rev. William Barber, president of the N.C. chapter of the NAACP pauses as he speaks to protestors and demonstrators outside the House and Senate chambers at the state legislature during the NAACP-led “Moral Monday” protests at the General Assembly in Raleigh, N.C., Monday, July 1, 2013. The rally this week highlighted the first day federal unemployment benefits that were cut off for 70,000 people. North Carolina is the first state to disqualify itself from collecting extended benefits as state leaders choose to pay down a debt to the federal government faster. (AP Photo/Gerry Broome)

Associated Press (AP)
[two_fifth padding=”0 25px 0 10px”]William Barber II
PROTESTANT MINISTER, NORTH CAROLINA[/two_fifth][three_fifth_last padding=”0 0px 0 10px”]William J. Barber II (born August 30, 1963) is a member of the national board of the National Association for the Advancement of Colored People (NAACP) and the chair of their Legislative Political Action Committee. Since 2006 he has been president of the NAACP’s North Carolina state chapter, the largest in the Southern United States and the second-largest in the country. Barber has served as pastor of Greenleaf Christian Church, Disciples of Christ, in Goldsboro, NC since 1993.


Beginning in April 2013, Barber led regular “Moral Mondays” civil-rights protests in North Carolina’s state capital, Raleigh. The Wall Street Journal credited Barber’s NAACP chapter with forming a coalition in 2007 named Historic Thousands on Jones Street People’s Assembly (HKonJ), composed of 93 North Carolina advocacy groups. “With this changing demographic, we had to operate in coalition,” Barber was quoted as saying. Historian and professor Timothy Tyson named Barber “the most important progressive political leader in this state in generations”, saying that he “built a statewide interracial fusion political coalition that has not been seriously attempted since 1900”.. An article in the Michigan State Law Review, “Confronting Race: How a Confluence of Social Movements Convinced North Carolina to Go where the McCleskey Court Wouldn’t”, credits him with bringing together a statewide political coalition. He “has become as well known [in North Carolina] as [Governor] Pat McCrory and Republican leaders of the House and Senate,” according to a 2013 Huffington Post profile of him.[6] He is active at the highest levels of the NAACP, e.g. traveling with the NAACP President and CEO Benjamin Todd Jealous to meet with Georgia prison officials