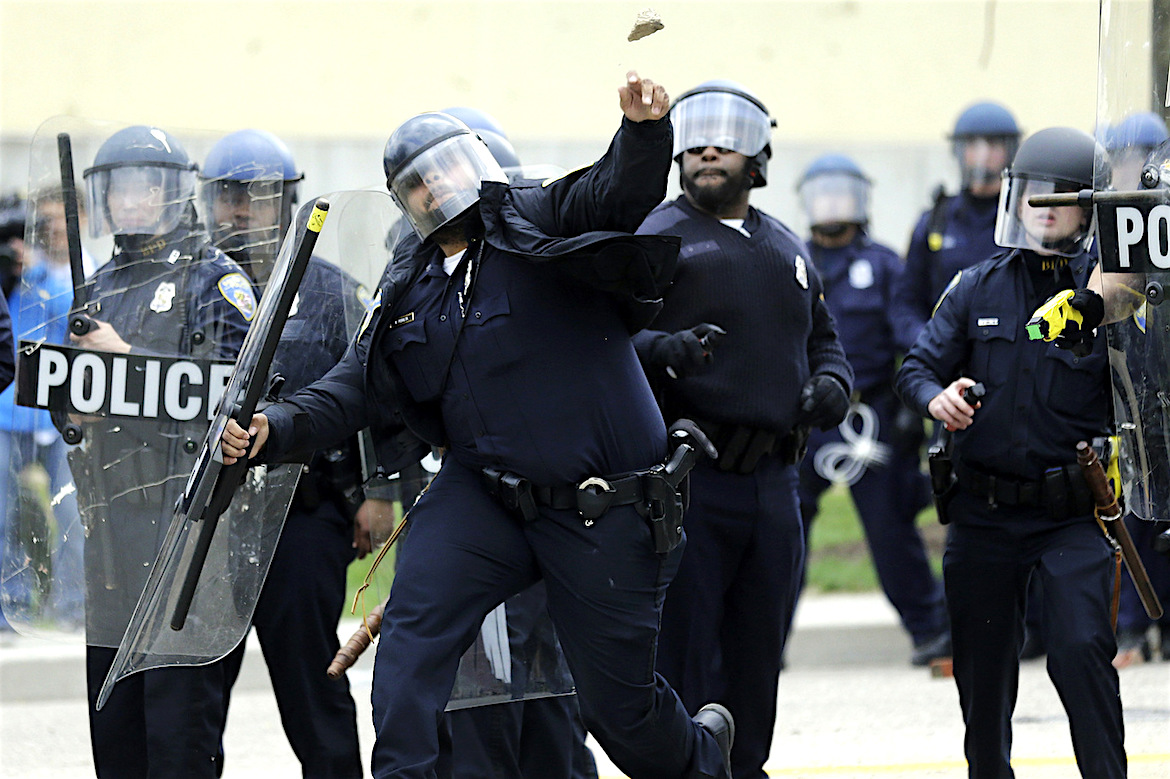 Salon Talks’ Carrie Sheffield sits down with The Grios’ Natasha Alford and civil rights lawyer Paul Prestia[/two_fifth][three_fifth_last padding=”0 0px 0 10px”]Its not just a matter of whether cops mean to do well or not, but something in the system is broken, said The Grios’ Natasha Alford in a Facebook Live video for Salon with civil rights lawyer Paul Prestia and Carrie Sheffield on Baltimore’s police report, released last week.

“There are systemic failures,” Alford said. “It’s bigger than whether you meant to be a good or bad cop that day — it’s training, it’s policy.”

The report pointed to the failures of so-called “broken windows” policing, which targets people for minor offenses, assuming that the path to more violent crime begins with things like loitering and public urination. Prestia suggested that the problem is not the theory itself, but the training of the officers.

A police officer throws an object at protestors, Monday, April 27, 2015, following the funeral of Freddie Gray in Baltimore. Gray died from spinal injuries about a week after he was arrested and transported in a Baltimore Police Department van. (AP Photo/Patrick Semansky)
[two_fifth padding=”0 25px 0 10px”]Baltimore Police Department
CITY OF BALTIMORE MARYLAND[/two_fifth][three_fifth_last padding=”0 0px 0 10px”]The Baltimore Police Department (BPD) provides police services to the City of Baltimore, Maryland and was originally organized in 1784 as a “nightwatch” and a force of day “Constables”. It was reorganized by mayor of Baltimore Thomas Swann in 1857, and officially established by the Maryland Legislature on March 16, 1853. It is the eighth largest police force in the US and is organized into ten districts, nine based on geographical areas and the Public Housing Section, and is responsible for policing 80.9 square miles (210 km2) of land and 11.1 square miles (29 km2) of waterways. The department is sometimes referred to as the Baltimore City Police Department to distinguish itself from the Baltimore County Police Department.