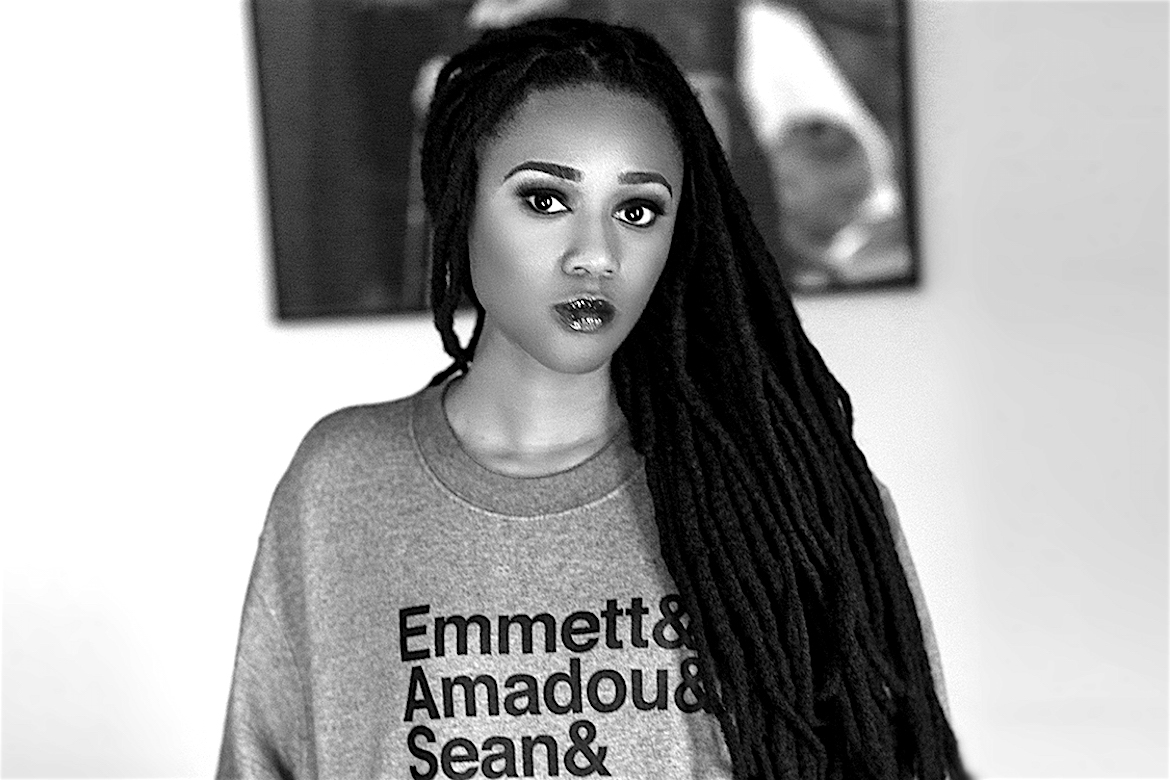 Meet Washington D.C.’s Tarica June.[/two_fifth][three_fifth_last padding=”0 0px 0 10px”]The scene opens on a striking young woman with waist-length locs and itty-bitty white dolphin shorts. She strides (maybe even glides?) through her Washington, D.C., neighborhood as effortlessly as she rhymes. And those rhymes she spits? A laser-sharp analysis of how demographic shifts might be robbing “Chocolate City” (as D.C. once proudly touted itself due to its thriving African American population) of its heretofore unrivaled soul. It’s all set to a retro ’90s beat, combining sampled percussion from the classic “Ashley’s Roachclip” (think Soul II Soul’s “Keep On Movin‘”) with the scat-vocal chorus of Suzanne Vega’s “Tom’s Diner.”

The MC is Tarica June, and the video is for her newest release, “But Anyway.” At first listen it’s the sort of summer jam that old-skool Washingtonians play while cruising through Rock Creek Park on their way to summer’s ubiquitous cookouts. Scratch a little deeper and you find a nuanced critique of how a native D.C. resident (“third generation”) feels that the very essence of the city she grew up in, and loves dearly, might be vanishing right before her eyes.

These eyes are amplified by a precisely applied coat of mascara on the afternoon that Tarica June joins me at the quaintly cozy Highlands Cafe—a chief location from her video—for fried green tomatoes (me), a Greek salad (her), and tea (both of us). In contrast to the take-no-prisoners, fly-girl bravada she exudes in “But Anyway,” the Tarica June sitting across from me is a little reserved.

“This is all happening soooo fast,” she says. “I posted “But Anyway” on Facebook and it’s like all of a sudden my social media has like this whole life of its own…I’m tryna keep up!”

Not an easy feat for a MC who was, until recently, leading something of a double life. After graduating from one of D.C.’s top-tier boarding schools (where she secured her financial aid via stellar academic marks and extracurricular involvement) and completing undergrad at Stanford (where she was accepted early), Tarica June copped a law degree at Howard University (graduating second in her class).

Yes, that rhyme flow, that strut, and those enviably gorgeous locs all belong to lawyer.

Since its release, Tarica has performed around the country, incorporating elements of traditional hip-hop, folk music, and spoken-word/poetry into her live shows. She has been featured at numerous festivals and conferences including the Can-A-Sista-Rock-A-Mic Festival, SXSW (TX), the DOPE(Dialogue on Progressive Enlightenment) Conference (North Carolina A&T University), the S.A.M.I. (Students Against Mass Incarceration) National Conference (Howard University), the B-Girl-Be Hip-Hop Festival, and the ‘For the Love of Black Womyn: Reclaiming the Radical Tradition of Black Feminism’ Conference (Howard University). Tarica also conducted a concert series dedicated to raising funds for community-centered organizations. Benefiting organizations included DC Jobs with Justice, Empower DC, Words Beats & Life, Iraq Veterans Against the War, and KayNou.

Tarica June’s path to music was unconventional. She first came to love and appreciate the power of the word at the age of eight when she started penning poetry and songs. Using the creative process for cathartic purposes, and keeping her words safely tucked away in private spaces, her first introduction to the D.C. music scene came much later (around 5 years ago) as part of ‘The Movement’. There she found herself being creative in another way–crocheting and knitting custom pieces for a local artists. Through these connections she linked with a number of producers and musicians, and began recording her previously unshared musings. Tarica June’s influences are extremely diverse– she names both poets and musical artists — Joni Mitchell, Sonia Sanchez, Nas, Ntozake Shange, Blackstar (Mos Def/Yasiin Bey & Talib Kweli), Tracy Chapman, Meshell Ndgeocello, Dead Prez, Rah Digga, OutKast — when discussing her most pronounced inspirations. She is currently working on her first album.