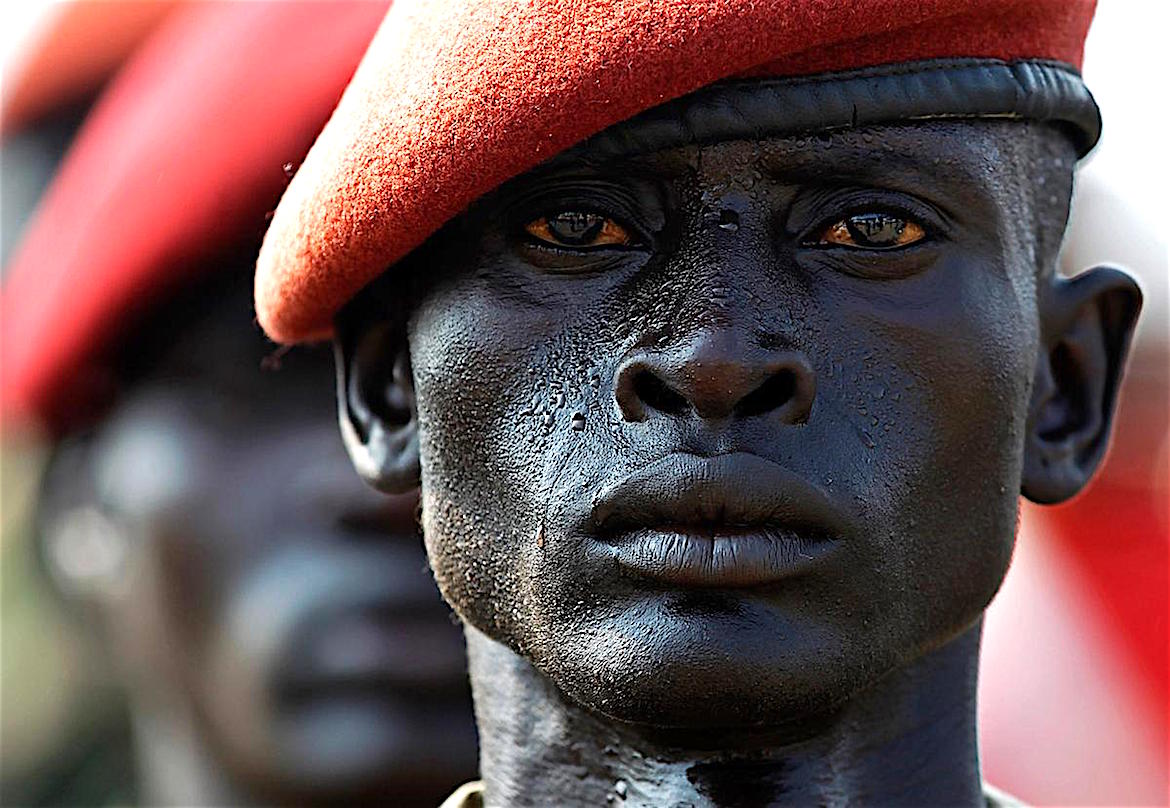 Colonial rule ended in Sudan in 1956. As the British and Egyptian flags were lowered, a struggle for power between rival factions was already under way. Fifty-five years later Sudan was partitioned and a new nation came into existence: South Sudan, whose population had spent decades waging a succession of wars against the regime in Khartoum, was now an independent country, the world’s most recent, recognized by the UN, the African Union (AU), and Sudan itself.

Since independence day in July 2011, Africa’s fifty-fourth sovereign state has fallen rapidly into strife and disarray. Tensions erupted in the capital, Juba, at the end of 2013 and spread to three large provincial cities. By the following year, thousands were dead and the AU had appointed a five-person Commission of Inquiry (AUCISS), chaired by former Nigerian President Olusegun Obasanjo. The commission spent several months travelling in South Sudan, mostly in UN helicopters: May 26–June 4 (Juba, Bor, Bentiu, Malakal), July 31–August 3 (Bentiu, Rubkona, Leer County), August 3–5 (Malakal, Nasir), August 6–7 (Bor), August 8–11 (Yambio, Juba). When the commission delivered its findings in 2014, I was the only one of five members who dissented. In the official report, the violence in South Sudan was characterized as mainly “criminal,” but in a minority view entitled A Separate Opinion, I argued that it was more than a breakdown of law and order. Rather, the violence was political. Criminal violence is the action of individual perpetrators, to which the response is simply to judge and punish. But political violence requires a constituency and raises more difficult questions—among them, how to isolate the perpetrators of political violence from their supporters. To begin to answer these questions, we need an accurate description of what happened, however complicated the situation appears as a result.

A Review of What Happened: Two main ethnic groups dominate South Sudan: the Dinka (the larger group) and the Nuer. Juba is settled along ethnic lines, and the killings in the capital at the end of 2013—by Dinka militias—were organized as a house-to-house operation in Nuer residential areas. The political objective was to cleanse Juba of its Nuer population, divide the inhabitants of the country along ethnic lines, and destroy any basis for consensus, polarizing 11 million citizens in the new state into us and them. A displaced person in a UN compound told the Commission: “They put a knife into what bound us, turned the crisis from political to ethnic.” By “they” was meant the government that assumed office on independence; the crisis turned ethnic at the end of 2013 after an explosive meeting of the National Liberation Council (NLC), the executive committee of the ruling party, the Sudan People’s Liberation Movement (SPLM). The divide that opened up at that meeting of the National Liberation Council in Juba took on an ethnic dimension and led to the violence we were called in to investigate.

The tension had been simmering throughout 2013 and rose dramatically when three members of the NLC announced their intention to contest the chairmanship, a position that would automatically qualify its holder as the ruling party’s candidate for the presidency in the upcoming 2015 election. In April the presiding NLC chair and president of South Sudan, Salva Kiir, who is Dinka, removed the executive powers of his vice-president Riek Machar, who is Nuer. In July Kiir dismissed all his ministers and then embarked on a tour of the Bahr el Ghazal region in the predominantly Dinka northwest, delivering provocative speeches that were broadcast on the national TV network. A member of Machar’s delegation quoted him as saying: “I have now decided to fight my enemies, and my nickname is Tiger; I have decided to scratch anyone who opposes me.” By the time he called for the NLC to meet on December 14, the stage was set for a showdown.

People unload the few belongings on Janu…People unload the few belongings on January 9, 2014 at Minkammen, South Sudan that they were able to bring with them to the camps. Hundreds of civilians fleeing violence in Bor region arrive at dawn to one of the many small ports that run alongside the camps in Awerial region, having crossed over the Nile River by night. Thousands of exhausted civilians are crowding into the fishing village of Minkammen, a once-tiny riverbank settlement of a few thatch huts 25 kilometres (20 miles) southwest of Bor. Some say they had spent days hiding out in the bush outside Bor as gunmen battled for control of the town, which has exchanged hands three times in the conflict, and remains in rebel control. AFP PHOTO/Nichole SOBECKINichole Sobecki/AFP/Getty Images

TOPSHOTS Students take notes during an E…TOPSHOTS Students take notes during an English language class at the Juba Nabari Primary School, in Juba on April 9, 2014. Recent conflict in the country has made resources scarce, many civil servants, including teachers, have not received their pay for several months. AFP PHOTO / ANDREI PUNGOVSCHIANDREI PUNGOVSCHI/AFP/Getty Images

A South Sudanese woman rests on a bed to…A South Sudanese woman rests on a bed together her son in a IDP camp for the Nuer ethnic group inside the UNMISS compound in Bor, South Sudan, on February 27, 2014. War crimes have been committed by all sides in conflict-wracked South Sudan, Human Rights Watch said Thursday, reporting widespread atrocities in weeks of carnage in the world’s youngest nation. Thousands have been killed and almost 900,000 forced from their homes by over two months of battles between rebel and government forces, backed by troops from neighbouring Uganda. AFP PHOTO / JM LOPEZJM LOPEZ/AFP/Getty Images

A woman dances as people celebrate referendum results in Abyei October 31, 2013. Permanent residents of the disputed Abyei region overwhelmingly voted to join South Sudan on Thursday in a symbolic referendum that could antagonise heavily armed Arab nomads who drive their livestock through the area and claim it for Sudan. REUTERS/Andreea Campeanu. (ABYEI – Tags: POLITICS ELECTIONS CIVIL UNREST)
SOUTH SUDAN
NORTH EASTERN AFRICA – Juba, Capital
South Sudan, officially the Republic of South Sudan, is a landlocked country in northeastern Africa that gained its independence from Sudan in 2011. Its current capital is Juba, which is also its largest city. South Sudan is bordered by Sudan to the north, Ethiopia to the east, Kenya to the southeast, Uganda to the south, the Democratic Republic of the Congo to the southwest, and the Central African Republic to the west. It includes the vast swamp region of the Sudd, formed by the White Nile and known locally as the Bahr al Jabal.

South Sudan became an independent state on 9 July 2011, following a referendum that passed with 98.83% of the vote. It is a United Nations member state, a member state of the African Union,[18] of the East African Community, and of the Intergovernmental Authority on Development. In July 2012, South Sudan signed the Geneva Conventions. South Sudan has suffered internal conflict since its independence; as of 2016 it has the second highest score on the Fragile States Index (formerly the Failed States Index).
More | Wikipedia