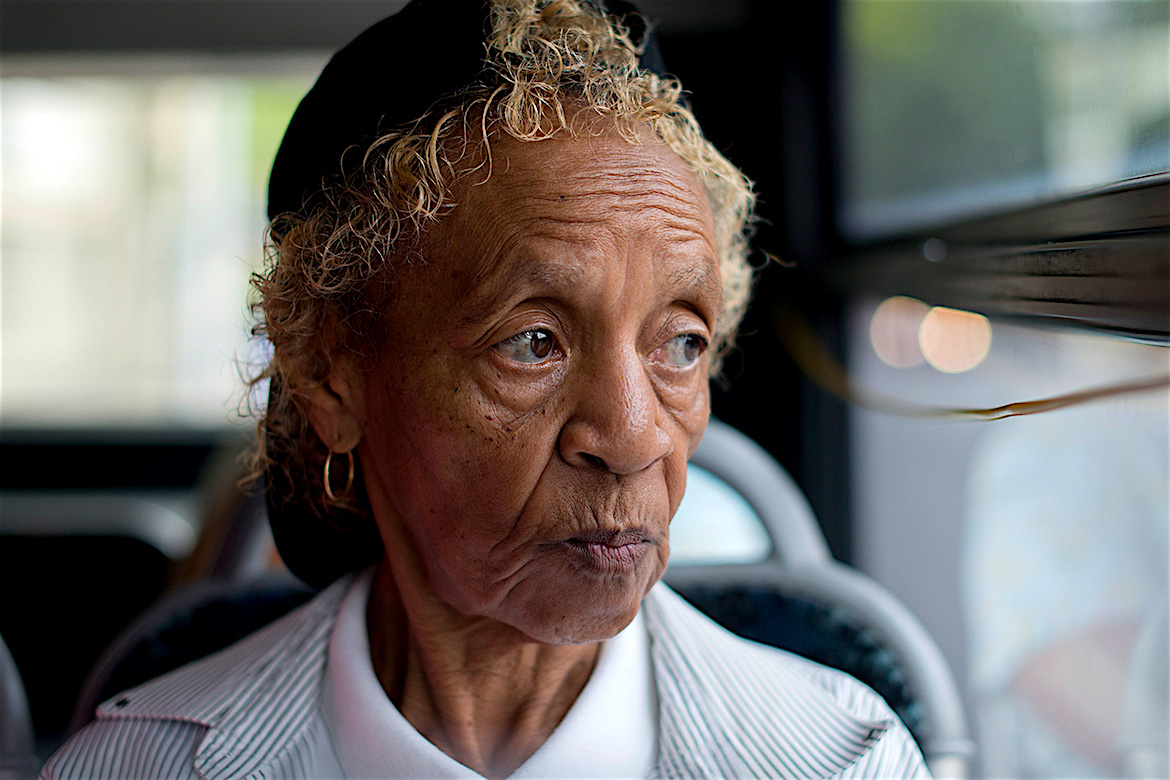 If Black Men Want to Heal Racism’s Wounds, We Can’t Pretend to Be Strong All the Time

In Birmingham, Alabama, a public bus takes about a dozen housekeepers from their low-income, mostly black neighborhood to a wealthy white suburb. These are the only stops the city bus makes; these are virtually the only people who ride it.

Irine V. McCord has several nicknames on the No. 50 Cherokee Bend bus. She’s Running Irine because at 74 she still tries to sprint to catch the bus. Or she’s Talking Irine because she’s a chatterbox. And the women on the bus often joke, “Irine’s asleep, wake her up!” when she nods off as the bus rolls through Birmingham.

McCord has been taking the buses in Birmingham since she was a girl. She remembers the segregated buses, how she was forced to stand as white passengers slid into seats and the driver moved the board designating “colored” farther and farther back.

“There might not be a seat back there, but you go back past that board. Just do it. You know, you don’t cause no problem. If you had to stand, you wouldn’t necessarily like it, but you just do it. Cause you wanna go on, you didn’t want to be delayed.”

McCord dropped out of school in the 11th grade, believing she would never be able to graduate, and started working full time. At first, she cleaned houses for people her mother knew. Soon she was working five days a week. Often, when she was waiting at a bus stop, women from the suburbs would drive by and ask if she had a free day to work for them.

McCord says when the buses were segregated, service was wonderful. Buses ran frequently and on time. They didn’t get bad, McCord explains, “till the white folks ran.”

Emma Walker, 90, does housework two days a week – cooking, cleaning, ironing. “I started back working in 1995 cause I didn’t have no financial help.” (Carolyn Drake / Panos Pictures)

Ruby O. Fox, 81, walks up the long driveway to the house where she works after riding the Cherokee Bend 50 maids bus from downtown birmingham to Mountain Brook.
BIRMINGHAM
U.S. CITY – State of ALabama
Birmingham is the most populous city in the US state of Alabama and is the county seat of Jefferson County. The city’s population was 212,237 in the 2010 United States Census. The Birmingham-Hoover Metropolitan Statistical Area had a population of about 1,128,047 according to the 2010 Census, which is approximately one quarter of Alabama’s population.

Birmingham was founded in 1871, during the post-Civil War Reconstruction period, through the merger of three pre-existing farm towns, notably, former Elyton. It grew from there, annexing many more of its smaller neighbors, into an industrial and railroad transportation center with a focus on mining, the iron and steel industry, and railroading. Birmingham was named for Birmingham, England, one of the UK’s major industrial cities. Most of the original settlers who founded Birmingham were of English ancestry. In one writer’s view, the city was planned as a place where cheap, non-unionized, and African-American labor from rural Alabama could be employed in the city’s steel mills and blast furnaces, giving it a competitive advantage over industrial cities in the Midwest and Northeast.
More | Wikipedia